Exploring fixed-layout EPUBs on the Kobo and the iPad 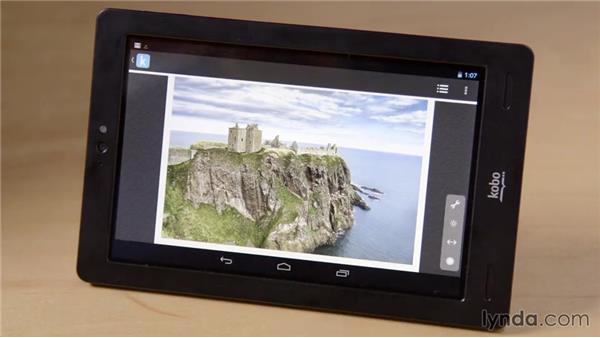 A couple of devices that have excellent support for fixed-layout ePubs are the Kobo shown here, and the iPad. A Kobo is the dominant eReader sold in Canada and a few other countries, and it's kind of neat because it's not only an eReader but it's a certified Android tablet. I picked this up a little while ago, it's from 2012, this is the Kobo Arc. But that version and other tablet versions of the Kobo have very good support for fixed-layout ePubs. I've exported a couple from InDesign and put them on my Kobo.

I'm going to take a look at these and then I'm going to switch over to the iPad and show you a couple other fixed-layout eBooks. So first, let's start out by opening up the kids book here, Little Red Hen. I'm just going to tap it and it opens up to the cover, and then as I swipe through, you can see how it's an excellent candidate for fixed-layout ePubs. This would be a disaster as reflowable eBook, but because it's fixed-layout, the pictures stay in position, the text stays in position, and it's live text. I can double-tap on the text to zoom in a bit. And I can pinch to zoom even closer, and then just zoom back out again.

Now I'm going to go back to the library and open up the other eBook. This other one is called Fly Away and it was actually designed originally as an interactive PDF or Digital Publishing Suite magazine. And these work excellent as fixed-layout ePubs as well. The cover was designed as a visual table of contents. And these pictures and text blurbs, you just tap on them to go to that section. So I'm going to go to the gallery section. So I'll just tap right here on the castle. And it brings us to the opening page for Castles of the World.

I can tap on that backwards arrow at the bottom to get rid of the Kobo Chrome here. Each one of these are simply thumbnails that lead to a larger image. So I'll tap on any of them, and there is a large picture of the castle. Now, what's interesting is that I can tap anywhere on this picture and the caption appears as a pop-up. And I'll be showing you how to do that in this course. Now, I can tap on the caption itself to hide the pop-up. I think it's pretty cool. And this is just a regular ePub, ePub 3, but it has all these interactive features that are really easy to add with Adobe InDesign.

Now let's switch over to the iPad. Now we're on the iPad in iBooks and I'm going to show you couple other ePubs that I've exported from InDesign and that we'll be working with throughout this course. First, let's open up the cookbook called Cooking with Vegetables. Cookbooks are another great example of why you'd want to use fixed-layout ePub, because you can see the picture of the dish or the raw ingredients in the recipe right next to the steps. If I select some text on this page, I get the pop-ups just like on any kind of reflowable text eBook.

And if I tap anywhere on the eBook other than text, I'll see the thumbnail navigation appear on the bottom. And I can swipe through the thumbnail navigation to jump to a different page. This is something that iBooks does automatically. It's not anything you need to do special in InDesign. Now, I'm going to tap the library link at the upper-left and we'll take a look at the other eBook. This one is called Candy Maker and it's like a magazine that's been turned into a fixed-layout ePub. Here's the cover, it looks fantastic. And I'm going to swipe one page over to get to the table of contents.

This table of contents was created with InDesigns table of contents styles and it's linked. It has a movie, too, on this page. I can play the movie. Now there's no sound in the movie so don't worry about that. But it's pretty cool, isn't it? I'll just tap to stop the movie. And now let's go to Taffy Tips on page 9. So I'm just going to tap that name. And we have a little bit of fun animation that I did with InDesign's Animation Panel. Wee! kind of fun! And one more thing, there's a little game on this. So I'm going to swipe forward a couple pages. Click or tap your favorite flavor of taffy to reveal its recipe.

So I'll just tap a piece of candy on the left and we get these cool little pop-up recipes on the right. I can tap another one, and this one disappears, and the other one appears. I'll tap anywhere on the book to get the library link and I'll go back to the library. And that's it. Fixed-layout ePubs on the Kobo and the iPad are a lot of fun to work with.

10/14/2014
Create a fixed-layout EPUB with InDesign CC and preserve your design's integrity across multiple browsers and ereaders. In this course, Anne-Marie Concepción compares fixed-layout EPUBs to their "reflowable" counterparts; shows how to optimize your existing text and graphics to work in a fixed layout; and demonstrates how to add links, animations, slideshows, pop-ups, video, and sound to create richer and more interactive ebooks. She'll also walk you through the process of exporting and testing your EPUB, as well as opening the EPUB files after export in order to add some finishing touches that InDesign doesn't offer yet, like dual-orientation layouts and customized tables of contents.
Topics include:

Video: Exploring fixed-layout EPUBs on the Kobo and the iPad