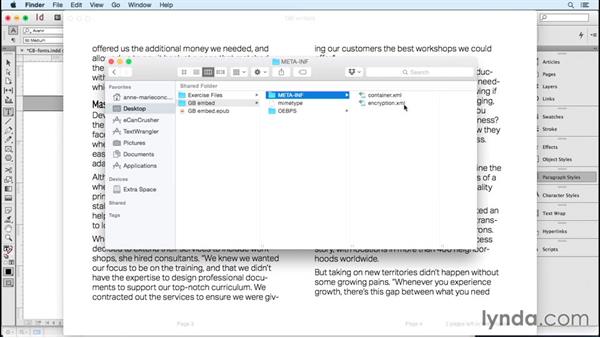 - Since you're a designer, I assume, since you're using InDesign, you probably want to be able to include the fonts that you use in your InDesign file within your EPUB. And in most cases, that's possible. But there are some pros and cons and some fiddly bits that we need to talk about. This actually could be a full course because there's a lot to talk about as far as embedding fonts in EPUBs is concerned. But I'm going to give you the high points now, things to keep in mind. First, the only kinds of fonts that you can embed in an EPUB are true type, or open type fonts.

You want to make sure those are the kind that you're using in your documents. In InDesign's drop down menu it tells you what kind of font that they are right here, that's an open type, true type. You want to avoid the ones with the red A, that's in type one font. You'll get an alert when you export to EPUB if you try to use a type one, saying that it can't be embedded. And in the actual EPUB file it'll just use one of the devices built in fonts instead. All your type kit fonts, the ones with TK, those are open type fonts and those are good to use.

I have a video devoted specifically to type kit here. Another way to quickly check what kind of fonts are being used in your document is to go to the Type menu and choose Find Font. Now I've already clicked the More Info button here, so that when I select a font up here it tells me what kind of font it is down here. This is actually what I do with most documents that I get when I'm about to export, is I quickly go through here and check to see that they are all open type or true type. Just for fun though, I'm going to select one of these subheads and in my Paragraph Styles panel I'm going to assign a variation of the Subhead style to it that uses that type one font Avenir.

And when you opened up this document, if you don't have Avenir installed on your computer, it's gonna say that it's missing when you try to apply it. If that happens to you you can just ignore it and carry on, and just watch what happens when I export to EPUB. The other thing that you should know is that when you export to EPUB you can only embed fonts if you are exporting to EPUB three, which is what we've been doing throughout this course. EPUB two does not support embedded fonts. You also need to make sure in the CSS pane that you have turned on Include Embeddable Fonts.

Unfortunately you can't just embed some fonts, it's all or nothing. It would be great if InDesign let us embed just the headline fonts, for example, and let the IOS or the Kindle use the system fonts, its own system fonts, for the body copy, that would be great with me. The only way to achieve that is to embed your fonts and then extract all the files and do your own editing of the EPUB files and files, which is kind of beyond the scope of this title. Just know if you're going to embed fonts, all the fonts will be embedded.

Let's click Okay. And you can see that my call to embed that type one font, I'm getting yelled at by InDesign. That's fine, I'll click Okay. And then it opens up, now here are the fonts that we did embed, this is the same font that we used in InDesign. It might look a little different, but that's because of the formatting. That's because of what happens when InDesign converts the paragraph and character styles to CSS. So it might look a little strange here, but these are the actual fonts. The font that was type one that couldn't go through is this one, so this is reverting to one of the system fonts.

Here are the other subheads that are coming through fine. I'm gonna go to the Finder and extract that EPUB. I'm want to to show you inside the EPUB I'll use econ crusher, which I talked about in a previous video. You can see that when InDesign embeds a font, first of all, in this folder it adds an encryption file which is completely valid, as far as the IDPF is concerned, but you need to know that there is an encryption file that appears if you embed files. If you don't, that won't be here. And then inside the OEBPS folder you'll see that the fonts appear here, as well.

And it may just look like the normal font, but instead, these are subsets, and they're what is called obfiscated, meaning that the code is mixed up so that people can't just extract this and use it themselves. But these are actually smaller than the full fonts. And of course, the fonts are called for in these CSS files, so if I open up this in Text Wrangler, we can see the font being called up here. Now if you don't embed the fonts, what happens? The problem is that it's hard to test on the desktop because InDesign will still write the font information in the class.

So for example, if I click here, right click and choose Edit Subhead, down here under Export Tagging InDesign is still going to call for this font. And what I've learned, at least as far as iBooks and ADE on the Mac is concerned, if this font is available on my system it will still show the font even though I'm not embedding it. So you really need to put it on an actual device, on a Nook, or a Kobo, or your iPad, to see what it's going to look like when the font is not available. So in order to show you on screen what it looks like when you don't embed this, to be sure, I added another file to the Exercise folder, it's called no embedded fonts and if we double click this guy and it opens up, this is what would happen if you exported without embedded fonts.

It is using the system fonts. And if I come up here, you can see that it doesn't show Publisher, or Original, it just shows my choices, so I can click to Georgia, or Charter, and the fonts change, as necessary. Now the other issue that I want to talk about is licensing. If you're using Adobe open type fonts, you're 98% good to go. You don't need to pay anything extra to embed them in your ebooks. And that's in your end user license agreemnet. There are a few fonts that other companies have licensed to Adobe from Bitstream that might not have that, but 98% of all the Adobe open type fonts do.

Also, all the Adobe type kit fonts, these are all open type fonts and they come with your Creative Cloud subscription. These are imbeddable with no extra fee, as well. And I'll be talking about type kit in particular in another video in this chapter. If you're using an open type or true type font that's not from Adobe, or that's not from type kit, then you really need to check the licensing. For example, here at fonts.com, which is a very common website to find new fonts and get them, let's say that I want to use this cool looking font in my ebook.

I can buy it for $47, but if I hover over Add to Cart, you can see that there are different options for licensing. And to get it for an ebook costs $94, on top of what it would cost to use for my print and PDF stuff. I added that to my cart and I want to show you that, though I can buy the $94 ebook license, that's only for one title. If I want to use it for more than one EPUB, then I have to buy multiple licensing, $470.00. So a lot of people, will for their ebooks, not use those kind of fonts unless the client, you know, wants to pay for it.

Instead, they'll use free fonts like you can get from Font Squirrel, any fonts here that have this little icon of a ereader are usually able to be embedded in an EPUB with no extra cost. Read the licensing to see what you need to do. Same thing with Google Fonts, these are mainly for web fonts, but you can also download these fonts and these are also open source free fonts that you can normally embed in your EPUBs. Now that you have the high points under control, as far as technicalities, and licensing, I think that you're good to go with embedding your fonts in your EPUBs.