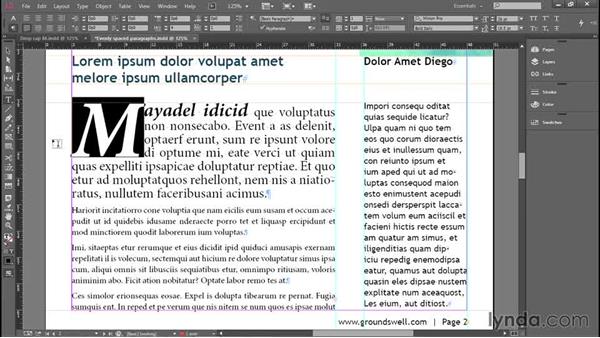 - In this movie I'll introduce you to drop caps, columns and vertical alignment. We'll start with the drop cap, which is an enlarged letter that takes up multiple lines of type. We'll go ahead and switch over to my document so far, and armed with my selection tool up here at the top of the tool box, I'll double-click some place inside the first paragraph to automatically switch over to the Type tool and position my blinking insertion marker. Drop caps are a paragraph level formatting attribute, so make sure the backward P is selected on the far left side of the control panel, and then move over to this option right here, Drop Cap Number of Lines.

Now this, by default, it's set to 0. If you increase that value to 1, you're not going to see any difference because that first character is already taking up 1 line of type. But if you increase it to 2, you'll see that it takes up 2 lines of type, and then 3 and finally 4. Now by default, this value, Drop Cap 1 or More Characters is set to 1, so only the first character is affected. But if you increase that value to say 3, you'll drop cap the entire first word. I don't like that effect however, so I'll take it back down to 1.

Now the great thing about this setting is that you can revise this text as much as you want. So I could select the D and replace it with some additional characters, at which point the new first character is going to be drop capped, and the other characters, including that D, will take up just 1 line apiece. Now you want to make the M upright, so I'll go ahead and select it with my Type tool. Now in addition to selecting styles from the Type Style pop-up menu, you can apply bold and italic using keyboard shortcuts.

Next we want to move over to this option, Number of Columns, I'm going to click the up arrow icon in order to increase the number of columns to 2. And notice that affects more than the selected paragraph. In fact it affects the entire story. And a story in InDesign is made up of multiple paragraphs of type. Now in my case I only want the deselected paragraphs to be affected. I want the active paragraph to span, S P A N, both columns, and you do that by switching over to this next option.

Notice when I hover over it, it reads Span Columns. And I'll change it from None to Span All. This is going to affect just the active paragraph and nothing more. So notice now that the first paragraph spans the entire text frame, while the deselected paragraphs fall into a 2 column layout. Now finally, I'm going to press the Escape key in order to switch back to the Selection tool. And I'm going to click on this text block right here. Now let's say that I want this text to drop down so it's aligned to the bottom of the text frame.

I'll move over to these icons on the far right side of the control panel. Notice currently Align Top is selected. But I can switch that to Align Center, which will center the text vertically, or to Align Bottom, so that the text is aligned to the bottom of the text frame. Now I want this text to more or less align with the headline next to it. So I'll press the Up arrow key twice in a row to nudge that text frame 2 points upward. Then I'll click off the text to deselect it.

And that's how you establish Drop Caps, as well as divide a text frame into columns, span one paragraph across both columns, and align text to the bottom of a text frame, here inside InDesign.