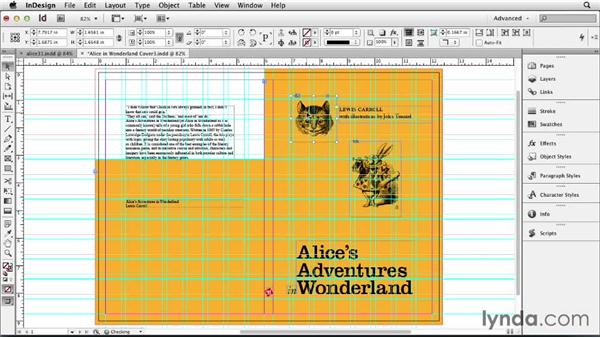 So, working on the front cover. We have the text that we placed from the text file, but actually I am going to copy and paste the text that we already worked on, for the title page of the book interior. Frequently, you find that book interior title pages, and the book covers, stylistically don't really go well together. And the reason for that is that they're often designed by different people with little communication between them. But here, we're designing both, so we want to make them look like they're from the same stable. So I'm going to select this text. I'm actually going to select all of the text, and then copy that. And then we'll move over to our cover document.

We can delete that bit, and then paste the text from our title page onto our cover. Let's just move this text for the spine out of the way, and I'm now going to select the text for the title, and group that. And, actually I want that to go at the bottom of the page, which sounds a little odd, but I think it looks good like this. So, I'm going to move it down and I'm going to position so that the baseline of this type is one row away from the bottom margin.

And so that the left hand edges of the larger letters are aligned to the second column. And then, I would like to make this bigger. Now, at the moment I can see that my text frame is actually bigger than my text. So I want to make it bigger. Let me zoom out and select that. Let me just move Mr Rabbit out of the way for a moment. And then I'm going to now scale this up, Cmd+Shift and pull from it's top right corner.

And I want its right hand edge to be one column, away from the edge of the page, like so. And then when I look at this text, I think that I would like the leading to be a little bit tighter, and I would like this word, in, to be a little bit closer to the W. So let's do that bit first, I'll double-click on that and I'll just nudge that over. And then I will select that type.

Now currently this is in a text frame with the text aligned to the bottom. So when I press optional alt and the up arrow to reduce the leading, the text will continue to be aligned to the bottom. Like so. Alright, now let's turn our attention to the Cheshire cat and the author and illustrator text. The Cheshire cat, I would like to have one row from the top. And I think he's going to look cheekier, which is how I want him to look, if he's a little bit smaller. And I'll position the author name beneath him, like so. Let's consider the size of this text, currently 18 points. And the illustrator, curently 14 points.

I think I'd like to make these semi-bold, since they are over-printing on coloured background. And possibly a little bit bigger. I'm just going to scale them up, Cmd+Shift and drag from the corner. Prior to doing that, I fitted the frame around the text Cmd+Alt+C. And then I'm just going to nudge the cut down.

So there's a clear connection between these two elements, like so. Let me just point something out about the images. I want to turn on my Overprint Preview which is going to give me a clear indication of how things will look when printed. And when I do the images look a little bit strange. These are one bit or bit mapped images and they're saved as tiffs and the white pixels become transparent. But, we can see that they're not looking quite as solid as we want them to. The easy fix here is to come to the effects and change the blending mode to mulitiply, and that makes them a solid black.

Right, now I just need to consider the size and positioning of our rabbit down here. Let's turn the guides on. So I'd like him to sit on the same base line as the word Alice. So I'm nudging him up and then I want to scale him up and scale him such that I bring him closer to these elements and make a visual connection between them. And that's knocked his position off, so I just need to reposition him again. Now, there maybe some necessary tweaking that goes on here but essentially that is the design of my front cover.