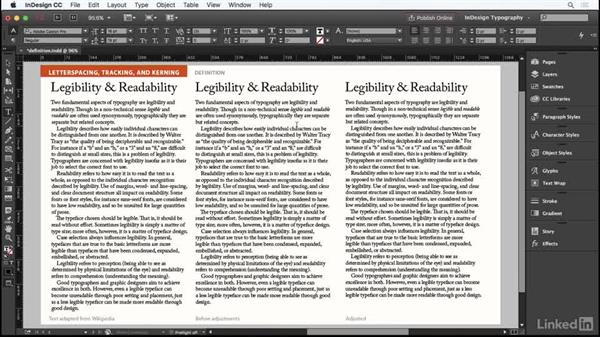 This video describes two important typographic concepts as well as the distinction between the two.

- [Voiceover] This chapter is about the adjustment of space between the letters and between the words. Three terms: letter spacing, tracking, and kerning. The most global is letter spacing. The most local is kerning. So I'm going to apply all three to a passage of text so that we can compare it to the original version which we we have in the center of the page. So that we can keep this as a control, I'm going to duplicate this column.

I'll select it, hold down my Option or Alt key, and drag away to the left. And then I'll work on the central column. The first thing I want to do is change the automatic kerning method. Now kerning, as I mentioned, is the most local. It is the adjustment of space between pairs of characters. But there's also a term in In Design called automatic kerning which gets applied, not surprisingly, automatically to all the letters.

There are two approaches. One is metrics. That's what's currently applied. And the other is optical. I have a movie explaining the difference between the two, but for now, all I'm going to say is that personally, I prefer optical. So I'm going to select this text and switch to optical. But so that you can see the difference, I'll select just that headline, copy it, and then paste it. And then on the second version, I'll switch the kerning from metrics to optical.

Well, we see that overall, it's a little tighter but let's now zoom in and take a look at how it's affecting the letter pairs. The difference is subtle, and I'm not sure that it really can be conveyed on the video. But, if you take a look at the space between the T and the Y, in the metrics version, it's just a little bit too close. There's a little more space in the optical version. I can confirm that if I put my cursor between the two.

There is 15 units of space in the metrics and 34 units of space in the optical. But more on that in upcoming movies. So for now, all I'm going to do is press Command + A to select all and switch to optical kerning. The second thing I want to do, keeping the type selected, is now change the letter spacing.

Letter spacing and tracking often get used interchangeably. I prefer to keep them distinct, having the letter spacing set the overall looseness or tightness of my type and then use tracking to fix any composition problems like widows and orphans. I'll come to my Control Panel menu and to Justification where I will change the desired word spacing to 95% and the desired letter spacing to -2%.

I need to make the minimum or so, -2. Comparing this with our original, we see that type is now slightly tighter. That's had a good effect on the second line where the word readable has been brought up to the end of the second line. But just overall, the spacing between the letters and between the words is now just a little bit tighter. As I say, largely a matter of personal preference.

Now I would like to just fix a few other things with tracking. So I'd like to fix this last paragraph where we have a short last line. And I would just like to end on this line. And I will do that by selecting the whole paragraph using four clicks and then use a keyboard shortcut to apply tracking to my selected text. Before you apply tracking and kerning, I recommend that you check your units and increments preferences.

So I'm gonna come to Preferences, Units and Increments. Windows users, you'll find your preferences under the Edit menu. And then I want to make sure that this option, this value, is as small as it can be, one one-thousandth of an em, so that I'm applying my tracking and my kerning in the smallest increment possible, ie. I have the most control. So I'll hold down the Option key or the Alt key and tap my left arrow.

When I do so, you'll see that that's now -1. And I'll keep tapping it until the word design is brought back to the end of the previous line. Now I don't want to go too far. If I had to go further than -10, I would need to find another solution. But anything up to -10 I think is okay. Just now coming to the headline, there is an often overlooked option to adjust only the spacing between the words.

When I was tracking, I was adjusting the space between the words and between the letters. Here, I just want to adjust the space between the words, ie. either side of the ampersand. And to do this, I will use the keyboard shortcut Command + Option + Shift and the backspace key. So that is Command + Option + Shift + backspace or Control + Alt + Shift + backspace. And I'll do that just a few times, and all that's doing is tightening the space either side of the ampersand.

If you're in any doubt about where tracking has been applied, there's a very useful composition preference. I'll come to my preferences again and to Composition and check that option, Custom Tracking / Kerning. And then when I switch to normal view mode, I'm currently in Preview view mode, so I'll need to press the W key to switch to Normal, I will now see highlighted in green any place where custom tracking or kerning has been applied.

Just to finish off, and it's a very subtle difference, but I would now like to move the E ever so slightly closer to the L. So I've applied an adjustment to the tracking which affects a range of text. I'm now going to apply some kerning which affects just this letter pair. It's the same keyboard shortcut, Option or Alt and the left arrow. And I'll just move the E slightly closer.

Let's press W to hide that highlighting. And there is my results. So here is the finished passage and here is where we started

6/17/2016
InDesign Typography explores the numerous type options, type-related features, and type-specific preferences of Adobe InDesign. Using practical, real-world examples, instructor and designer Nigel French explains the purpose of each feature and describes the conventions for how and when to use it. Part 1 focuses on "micro typography" or the appearance of individual letterforms. Nigel dissects the anatomy of a typeface and defines the terminology used to describe type in graphic design. He moves into choosing a typeface, scaling type, and adjusting spacing via InDesign's leading and kerning controls. The course closes with a look at glyphs, special characters, and OpenType features, including ligatures and fractions.
Topics include: