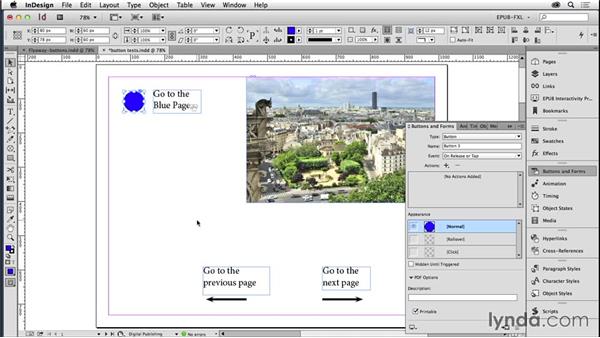 I have FlyAway brochure opened in iBooks, and notice that when I'm over the FlyAway masked head, my cursor looks normal. But when I get over any other part of this document, it turns into a pointing finger which tells me that I can tap here or click here and go somewhere. Of course, on an iPad or a Kobo I would just start tapping away and seeing what happened. If I tapped here, it brings me to the Sky Mall section. If I tap up here, I can jump back to the cover. If I tap on the gallery, I can see little miniatures of castles, and if I tap one of these miniature images, it will bring me to the full page image.

All this fun stuff is done with buttons, buttons in InDesign so let's take a look at that. I'm going to jump back to InDesign and here's that same FlyAway document open in normal view in InDesign. When I hover over a button, you can see that it highlights and it gets this heavy dashed outline. It's colored red only because it happens to be on the layer with red as the default color. But it's the heavy dashed outline and the little icon of a finger pointing at a button at the bottom right tells me that this is actually the button.

To see what this button does, we have to open up the buttons and forms panel. Which is part of my custom workspace here, Buttons and Forms, or if you don't see it in your dock, go to the Window menu, go to Interactive, and choose Buttons and Forms. Now the form elements that are part of this panel do not apply to fixed layout ePub, only the button stuff. And when I select this button, you can see that what this button does is there is an event that when a person taps it or releases their mouse button that there is an action called Go To Destination.

And the destination is in this document, I have a place called Sky Mall. And there are lots of different destinations saved with this document. I could have that button go to any one of these other destinations. There are lots of different actions that a button can have other than go to destination. If you look under the actions drop down menu, Go To Destination is one of only many different actions. I'm not going to be able to cover all these actions at all or everything the buttons can do in this video. Let me jump back to Chrome to remind you that I do have a playlist of all of the titles at lynda.com that do cover interactivity in InDesign.

So make sure and go there and watch those, there's chapters in there that probably spend like five different videos just talking about buttons. Let's talk right now, though, about creating our own buttons and how to do a simple go to destination. I'm going to jump over to button tests. This is in your exercise file but you can create any kind of document that you want just to test. And I threw in a bunch of pages, six pages and each one simply has the page number. There is a page here that's colored blue as well. The idea being that we want to create a button that goes to page four.

Here I've already selected this frame and turned it into a button. Let me back up a little bit. How do you make a button? It's really difficult. Select it with the selection tool. Open the Buttons and Forms panel and click the bottom icon, convert to button. The end. Anything that you can select with your selection tool can be a button. That means text, live text can't be a button, but the frame that it's in can be a button. So can an image, so can a group. A button has a heavy dashed outline and it has the icon of the element below it.

This one's kind of hard to see. And the next thing that you do after you create the button is you tell it what to do, what is the action. So for this button, we wanted to go to the Blue Page in the document. We want it to go to a destination. Go over here in Buttons and Forms, I'm going to give it a name, Blue Button. The event is that release or tap, that's usually the one you're going to choose almost all the time. And then we have to add an action. Out of all these actions. And we're just going to add Go To Destination.

And then just click okay, now you can go through your document and create a page destination for every single page just go one page at a time, it's just some up front work that you need to do. Now, with this blue button selected and I go back to Buttons and Forms, under Destination I have blue page. That's about it. Now let's test it. We'll open up the ePub interactivity panel. Make sure the entire document is selected because I'm going to have to jump from one page to another and then tell InDesign to render it. If it was a complicated document we'd get a little spinning beach ball but this is a simple one.

You can see we got a bunch of buttons and you drag them out, like I'll just drag this out. And it's a really nice looking thing. You can scale it. I'm holding down Cmd + Shift or Ctrl + Shift to make a really big button. We can see the icon. And if you look at the buttons in Forms panel, you'll see it's already been converted to a button. It has just a generic name that you can rename. And it has an action assigned to Go to Page. But of course, you can change this. You can just delete that action with, by clicking that little minus symbol and then adding your own action if you wanted to use this to go to destination.

Don't forget to check out the Sample Buttons and Forms. And these are just regular InDesign shapes that you can take apart. They're groups. And you can re-color and add whatever kind of extra effects you'd like. I hope you've gotten the sense that buttons are a very wide and deep topic in InDesign. And the fact that InDesign can convert the button actions to a JavaScript that will work in a ePub reader that understands ePub 3 is, I think, one of the most exciting things to happen to ePub's in a long time.

10/14/2014
Create a fixed-layout EPUB with InDesign CC and preserve your design's integrity across multiple browsers and ereaders. In this course, Anne-Marie Concepción compares fixed-layout EPUBs to their "reflowable" counterparts; shows how to optimize your existing text and graphics to work in a fixed layout; and demonstrates how to add links, animations, slideshows, pop-ups, video, and sound to create richer and more interactive ebooks. She'll also walk you through the process of exporting and testing your EPUB, as well as opening the EPUB files after export in order to add some finishing touches that InDesign doesn't offer yet, like dual-orientation layouts and customized tables of contents.
Topics include: