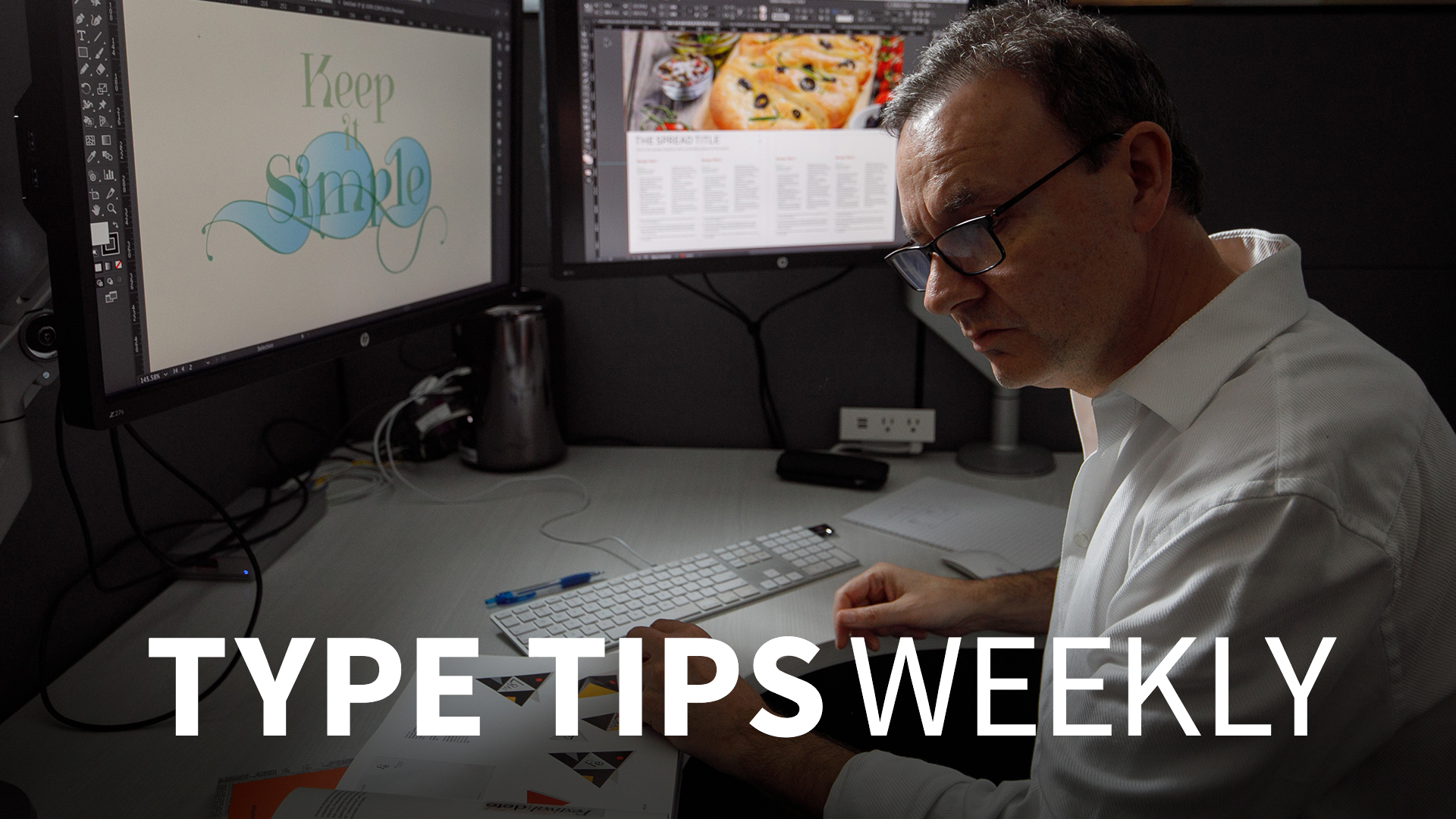 Join Nigel French for an in-depth discussion in this video Controlling text flow with span and split columns, part of Type Tips Weekly.

- [Narrator] In this week's Type Tip we're going to see how we can format a document like this, typical for a cookbook layout where we can use Span Columns, Split Columns and Keep Options to really control text flow in a very efficient way. If we take a look at the overlay that I have on a second layer you can see how the text is flowing through this spread. And you might be tempted in replicating this to come up with as many text frames as I have indicated with blue shading here.

That's a total of 13. But we don't need that many. We can get by with just two text frames using Span Columns, Split Columns and Keep Options. So let's see how. On the next spread is my starting state. I'm going to select both of these text frames and change them to two column frames with an 18 point gutter. Now let's zoom in.

And it's time to address the spanning and the splitting. So first of all, the head. This, rather than being confined to a single column, needs to span columns. The same is also true of the strapline. The recipe title can stay as is, and then when we get to this text, serves, and all the way through the ingredients bulleted list, this should all be split.

Two separate paragraph styles here, so I'll need to make two moves. Span Columns, because by implication if you can span a column, then you can also split a column. I'm going to split it into two and have 12 points of space above. When working with spans and splits, combining them in the same text frame things can get kind of confusing and they are somewhat confusing now, because currently only these three paragraphs are splitting.

But if I come to the Ingredients style and make sure that it also splits, things start to take shape. But we next come to our step-by-step list and this should not be split, this needs to go back to a single column. And with that I have essentially my layout. But of course, there are still some issues, not least of which is that the recipe's titles are beginning in the wrong place.

This can be addressed with Keep Options. I'll come to Keep Options and I first attempted this in Next Column only to find that that's also going to affect recipe number one and my text just disappeared, so rather than use that, I'll use this, Keep with Next. I just want to make sure that my recipes are kept with the next two lines. So now things are in pretty good shape, but we still have an issue.

I'll return to the starting point. You'll see that on the right hand page the text begins, all the recipes begin on the same baseline. I have a guide drawn at that point. So how do we move the text down to that position? Well, one option would be I could just adjust the top of the text frame but rather than do it that way, I'm going to show you a trick using a custom baseline grid.

This is a trick I learned from Alan Gilbertson on the fantastic website, InDesignSecrets.com, which I highly recommend you check out. So what I want to do here, and I should just preface this by saying that all of this text is aligned to a grid. That the title and the strapline, those are not aligned to the grid. I'm going to select the frame, I'll select both frames, and come to my Text Frame Options, Baseline Options.

I'll say Use Custom Baseline Grid. Now the increment that I want to use is five points. That's because I have 10 point leading and I'm halving that. But this next part is really the essence of the trick, and that is you can choose to have your grid start at a specific point, and that specific point, as indicated by the guide that we saw just a moment ago, is going to be 100 points from the top of that frame.

And that's going to move this text down to that point so that the recipes all align nicely, and it's not going to affect these two paragraphs because these two paragraphs are not aligned to a grid. One more bonus tip. You'll notice that the ingredients are numbered. And you'll notice too, that that numbering restarts with each recipe. So how is this achieved? Let's just take a look at the Bullets and Numbering.

You'll see that I have a List Style applied to this. And we can't actually see the options of that here. I'll show you those elsewhere in just a moment. But crucially, this is set to a Level two and the list Restarts at This Level after Any Previous Level. So the essence of this trick is that there needs to be a previous list to force this list to restart.

Let me just come and show you the list. The Step list is Continuing Numbers across Stories. But here's the punchline. If we look at the Recipe Paragraph Style and come to its Bullets and Numbering Options we see that this is Level one, but there is no number. So it is possible to have a paragraph be part of a numbered list but not actually apply a number to it.

And that's going to affect the next level in that list. So there we see Span Columns, Split Columns, Keep Options, a very handy custom baseline grid trick, and how to restart your numbering within a story.

3/5/2018
Take your love of letterforms to the next level with this weekly series that explores all things, big and small, related to type and the practice of typography. These tips are aimed at people using Adobe Creative Cloud: primarily InDesign, Illustrator, and Photoshop. Some tips are specific to particular applications and some are purely conceptual and software agnostic. Tune in every Monday for another timely tip to improve your typographical skills and increase the efficiency of your design workflow.