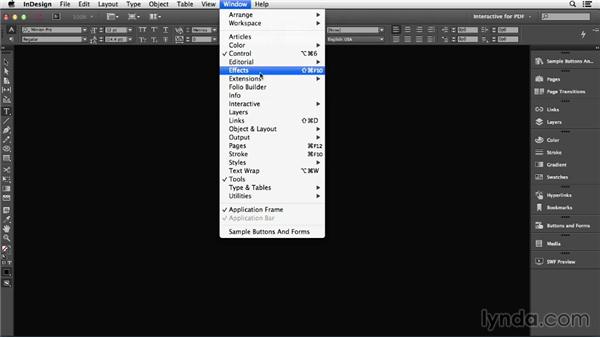 Join David Blatner for an in-depth discussion in this video Choosing a workspace, part of InDesign: Interactive PDFs (2013).

You wouldn't want to cook an omelet in your bedroom, right? No, you need to choose the right environment for the job. And in InDesign, that means choosing the right workspace so that you have just the tools you need right where you need them. As you know, you can choose a workspace by going to the Window menu and then choosing one out of the Workspace Pop-up menu. Or, here in the application bar, you could just choose from this Pop-up menu. Now, by default it's set to essentials. I would typically use Advanced. But because we're talking about making interactive PDFs, I'm going to start with a different workspace, Interactive for PDF.

Now, you'll notice I said start with. And that's because I believe in starting with a workspace and then customizing it to the way that you work, and the panels that you want. I don't agree with all of the choices Adobe made in setting up this workspace, so, I'm going to change it. For example, Adobe put this Sample buttons in forms library out here in a secondary dock. I really have no idea why they did that. And I'd like to take that and drag it into the primary dock on the right. I'm going to drag it all the way to the top until I see that nice thin blue line. That places it up there.

In my mind, any way to save a little screen real estate is good. So, that saves the space by removing that secondary dock. There's also a couple panels that they left off of the dock here, and I want to go open them. I'll go to the Window menu, which is were all of the different panels live, and I'm going to turn on some of these panels. Lets start down here in the Interactive sub-menu. Animation sounds promising, but as I'll talk about in a later chapter, it's just not relevant when it comes to interactive PDFs. Same thing with the Object States or the Timing.

The panels I really liking having open are the Effects panel, the Cooler panel, which you can find underneath the Extensions sub-menu, and I like the Object Styles panel. I use that a lot. So, I'm going to go down to the Styles sub-menu and choose Object Styles. Of course, I don't want these panels floating in the middle of the window, I want to put them into the dock. I'm also going to reorder the panels in the dock just so that I have them in the order that I personally like. I do like Sample buttons at the top. And then I like pages, and then I like putting the swift preview up there after pages.

I'm going to drag page transition down after layer. I'm going to move both the hyperlinks and bookmarks up by dragging this little dark gray bar up until I see that thin blue bar, there we go. I'll put buttons and forms inside that doc group. And to me media makes sense in that group as well. And for the final group, I'm going to drop Object Styles in, put Cooler in, and then put Effects all the way at the top. Now, I want to emphasize that you don't have to do it the way I do it. You don't have to copy this.

It's just that I have found this to be a really nice way to have all my panels setup inside of InDesign when I'm doing interactive PDFs. But remember, the more that you customize it to the way that you work, the more efficient you're going to be. Now, that I've customized it to the way I work, I want to save my workspace. S,o I'll go back up to the Application bar and choose New workspace. Now, I'll give it a name. You can call it anything you want of course, and then click OK. Now that we have our workspace set up and saved, it's time to jump in and start setting up our InDesign documents for interactivity.

7/23/2013
While PDFs can be used for printing, they also have interactive features that make them great for forms, brochures, and prototypes. In this course, InDesign insider David Blatner tells you what interactive PDFs are, why they're so useful, and how to make them yourself with Adobe InDesign and Acrobat. Learn to make hyperlinks to websites, other pages in your document, and email; add buttons that navigate, show, and hide content; create a form with check boxes and text entry fields; and embed audio and video. Plus, discover how to add polish with calculations, page transitions, and more.
Topics include:

Q: I am trying to turn objects in a layered InDesign document into buttons, following the lessons in Chapter 3, but they don't show up when I export to PDF. What's wrong?

A: This is a known issue with InDesign, stacked layers, and buttons. The final stacking order in your PDF is actually determined by the order the buttons are created, not the stacking order of the layers in your document. David Blatner has researched and proposed a solution to this issue on his InDesign Secrets blog. Read more about it here.

A: The author updated three movies in the "Links and Bookmarks" chapter, since the behavior of hyperlinks has recently changed in InDesign CC.