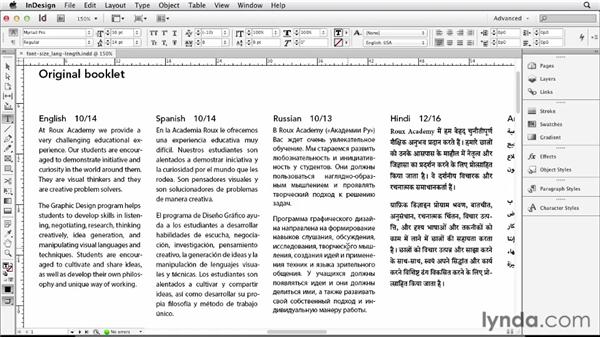 Join Diane Burns for an in-depth discussion in this video Choosing fonts and examining other design considerations, part of InDesign: Multilingual Publishing Strategies.

When it comes to designing multilingual documents, there are a couple of things you need to keep in mind. These are issues separate from marketing considerations, such as cultural sensitivity and so forth, which is outside the scope of this course. Rather, we're just going to talk about what you need to consider when designing a document that will contain languages other than English. First and foremost is your choice of typeface. With multilingual publishing, you want to choose a typeface, when possible, that has a character sets for all the languages you'll be working in. If you're targeting audiences for Western European languages such as Spanish or French, just about any font you choose will be fine.

But if you need to produce documents in any other language group, do your homework first. Don't choose a typeface and find out later you can't use it for, say, the Turkish version of your brochure or document. Font vendor websites are a great resource in this regard. One that's done a lot of work to make your research easier is FontShop. You can filter almost anything by languages. For example, let's go to the Category section of their website, and say we want a Slab-style typeface to typeset Russian.

If we go to the Slab category, we can actually filter these fonts by language. So, I'll just type in Russian, update the filter, and now I have a list of all the fonts that have Cyrillic characters, and in which I can typeset Russian. Notice, by the way, too, that if you get outside the Latin character set with Cyrillic or certainly Arabic or Chinese or Japanese characters, the primary font may not contain the characters you need. For example, Bookman Old Style doesn't contain Cyrillic characters.

You need instead to get Bookman Old Style Cyrillic to get that language coverage. This is especially true with Middle Eastern languages, and typically, Asian fonts are not in the same families as the fonts we're accustomed to. There is no Bookman Chinese Font, nor Myriad Chinese font. And in that case, you really want to try to match the style as closely as you can. The other thing to consider when you're designing multilingual documents is language length. I thought it might be interesting to compare the text from our Roux brochure which we've been using throughout this course and which we had translated into seven other languages.

Here, you see a couple of paragraphs as they were set in the original brochure. Myriad 10/14. Spanish was set with exactly the same type specs and you can see that it runs a little bit longer. In the case of Russian, in order to fit in the space we had, we actually had to decrease the leading, because of Russian runs longer still than even Spanish does. In the case of our Hindi text, the fonts run a little bit smaller, so we actually increased the font size, and the leading, and the language still took up less space than our English.

In Arabic, we increase the leading even more to fill out the space. For Asian languages, you'll generally find that Asian fonts run larger than their same-size counterpart in Latin characters. And we typically decrease the point size for these languages. But if we zoom back out, you start to get a sense of the different lengths of languages, even with different type specifications. On the next page, we've actually set the languages all with the same type specs.

They're all 10 on 14. And you start to get a sense of the variety in language length, as well as the difference in font sizes. You can see that these characters tend to run much larger than English. And finally, the last page of our document compares certain fonts with their English counterpart. And in the case of Chinese, for example, we had to reduce the point size a full point size to match the English text.

So, the general rule of thumb is to leave a little whitespace and adjust type specs for different languages as needed. There is a great example of this sort of thing that you can download for yourself. This is a EU report, and I recommend you download the highlights. The primary link here is for English, but if you click on this little box, you can download this report in any one of the 22 official languages of the European Union. In this report, the same content needed to appear on the same pages within the document.

On the left, we have the English page and on the right the German page. A couple of things I'd like to point out. First of all, you can easily see the white space that's on the English page. And if you look closely, the German text not only takes up more space, but it was even made a size smaller. You can see that the sidebar for German is a bit longer than the one for English. So, the overall design had to take that into consideration. Same thing on this page. Here, we needed to leave room--or the designer had to leave room, rather--for a much longer sidebar.

You can really see the difference in a language like Finnish, where we have a much longer sidebar here and the type set at a small spec. So, as with any design project, you always need to plan ahead, but with multilingual publishing, keep your fonts and language length clearly in mind.

1/10/2013
Join Diane Burns as she walks you through the ins and outs of working with multiple languages in Adobe InDesign. This course explains the differences between the major language groups and considerations for working with Japanese, Middle Eastern, Indic, and other specific character sets. Diane also shows how to install helpful plugins, choose fonts, and select the best workflow and formatting methods for various types of projects. The final chapters walk you through printing a document and creating a tablet app, EPUB, or HTML file.
Topics include: