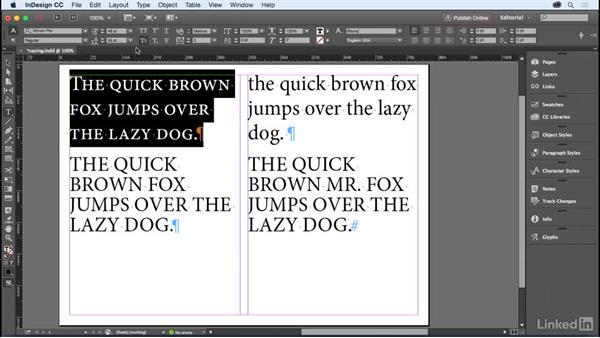 Learn how to change case in InDesign.

- [Voiceover] Casing options in InDesign are straighforward,…but are not as smart as they should be.…I'm gonna come in and double-click…to insert my Type Cursor into the Text Frame,…and then four clicks to select that paragraph.…To switch this to all uppercase,…I can click on the two big Ts on my Character Formats…level of the Control Panel.…Alternatively, I can use the keyboard shortcut,…Command + Shift,…or Control + Shift + K.…As an alternative, there's Small Caps,…which turns every caps letter to a full-sized…capital, and every lowercase letter…to a reduced size capital.…

In the case of my selected text,…if I wanted every word to start…with a full-sized capital, I would need to come…to the Type Menu, choose Change Case,…and switch to Title Case.…If the text has been typed with the Caps Lock key…on, you can switch that to Lowercase,…Title Case, or Sentence Case.…In this instance, I'm gonna go to Lowercase.…Now over here, I'm gonna use Sentence Case.…

And, we see that that works, well enough.…But, Sentence Case is very easily tripped…