Building with modifiers: Single-line and multi-line 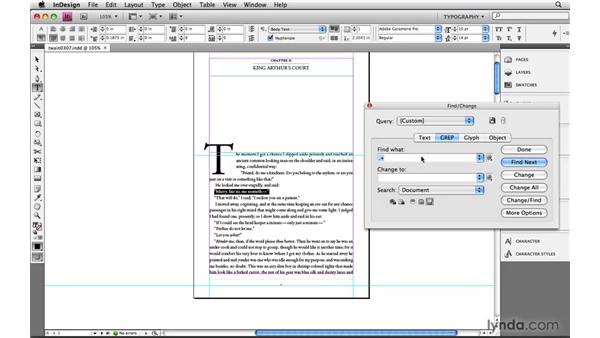 The Single-line and Multi-line options change another default behavior of GREP,…which is to treat each paragraph individually.…The parameters of a search automatically end when a hard return is encountered…at the end of a paragraph.…This is what's called Multi- line mode and it is on by default.…Changing from Multi-line mode to Single-line mode only affects one thing,…how GREP treats the Beginning of paragraph metacharacter and the end of…paragraph metacharacter.…Let's take a look at what this means.…I am going to open the Find/Change dialog by hitting Command+F, or Ctrl+F on…Windows. I am in the GREP tab and if I were to describe a paragraph,…it would essentially be the location, the beginning of a paragraph, then any…character One or More Times and then the location, the end of a paragraph.…

Typically, the way that GREP works, I don't really have to define the beginning…and end of a paragraph if I am using something like the Any Character…metacharacter, which is a period, followed by a plus, meaning One or More Times.…