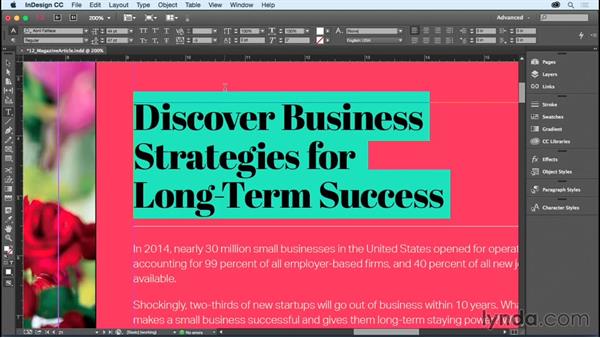 - In an earlier chapter, we looked at the basics of character formatting, including setting the font, size, leading, and baseline shift. Now let's look at a few more other important character style options we have. I'm going to select this text frame here. In fact, I'll double-click on it to switch to the Type tool and put the cursor into the text. Now let's zoom into 200% by clicking cmd + 2 or ctrl + 2 on Windows. Because I have the Type tool, I can now drag over the text that I want to select. Of course, I also could've clicked four times on the paragraph to select it.

The top control is kerning. Kerning lets you control the amount of space between two letters on a line, and the second one is tracking. Tracking is the same as kerning, but it goes across a range of text, not just two characters at a time. In fact, some people call tracking range kerning. Technically, they're both doing the same thing, adjusting the amount of space between characters, but, again, you usually use kerning for just two characters at a time and tracking for a whole bunch.

Well, that said, even though I have a whole paragrapgh selected here, I'm going to change a kerning value. I'm going to change this kerning value from Metrics to Optical. You see, Metrics tells InDesign to read the character spacing tables that the font designer built, and that's usually pretty good, but optical kerning is a very clever technology in InDesign which actually looks at the shape of each character and that adjusts the spacing between them very subtlety so you get more even spacing throughout.

When I choose Optical, you'll see that all the characters adjust, and it just looks a little bit better. Now, it doesn't work for all fonts and all sizes, but in most cases it actually gives you a better result than you would normally get from a font using Metrics, so I almost always use optical kerning for headings like this. I don't worry about it so much for my body text down here, but Optical is great for headings. Of course, I can always override that optical kerning on a character by character basis. For example, maybe I want just a little bit less space between the O and the V in this first word.

I'll click between those two characters, and I'll head back up to the control panel, and I can see in the kerning field that it's currently set to -40. It's in parentheses, which means that's what InDesign is currently applying between those two characters. I'm gonna make that a little bit tighter, so I'm gonna change it to -50. Okay, now let's say I wanted to make the whole line tighter or looser. I can do that by selecting the entire line, or in this case the whole paragraph, and then going up to the tracking field. Positive numbers add space between each letter, and negative space remove it.

I don't really care. All I know is that we're dealing with very small numbers here. Okay, there are a number of other character formatting attributes that you'll probably never use or perhaps never should use, like right here in the middle of the Control panel, there's the vertical and horizontal scale. Right now they're set to 100%, but I could scale this wider, for example, changing this to 150%, and if you wanna get really crazy, you could share it. That's this field over here. Let's set this to, say, 30 degrees.

You can see that it skews or sheers it to the right. It almost looks italic, but this is not a true italic. This is a fake italic. Some people would call this oblique. Now if you're gonna do this, just be sure not to show it to any type designers because they're gonna scream at you because it looks terrible, but at least you know that you can do it. Let's go look at some text formatting that you probably will use. I'm gonna scroll down on my page here, and I'm gonna select some text over here. I'd like to give this phrase an underline, so I can do that by going up to the Control panel and clicking on this little button, this T with an underscore.

It's highlighted so I can't really see the underscore very well, so I'm gonna click off here so we can see it. Now that underline is not bad, but it's a little bit thick, a little clunky, and it's in the wrong color. I'd like a different color. I really wish that I had some controls over how that underline looked, and, in fact, I do. I'll go ahead and select that text again, and this time I'm going to go to the Control panel menu. That's this menu way over in the upper right corner of the screen. Here in the Control panel menu, you could choose Underline Options.

There's actually a bunch of other options in this menu that you should look through. Just take a minute and flip through the features in here. But, the truth is I don't usually choose Underline Options from this menu. Instead what I do is I hold down the Option key on the Mac or Alt on Windows, and then click that little Underline button again in the Control panel. When you hold down Option or Alt and click, it forces the Underline Options dialog box to appear, same thing you'd get if you chose it from the menu. Now we can see that the underline is turned on here in this little check box, but you can also see that we can change the Weight, Offset, Color, and so on.

Let's go ahead and change this to something different, like, let's make it black instead of white. Then, let's make it a little bit more narrow, 0.5 points. The Offset is how far away from the baseline, the bottom of the text, that it's gonna sit, so I'm gonna make this a little bit bigger, maybe 2.5 points. And while we're at it, why don't we change the type too? You can see you have a lot of different controls in here. I'm gonna change this to a dashed line. All right, let's click OK, and you can see that it's changed, or you could if I clicked off of it.

So there we go. We have a nice dashed line 2 and 1/2 points down from the baseline. Well, phew, that's a lot of different formatting options, and we've really only scratched the surface of what you can do with character level formatting. In the next movie, we'll look at some features for turning text into uppercase or small caps characters.