Adjusting the interface: Dark and light 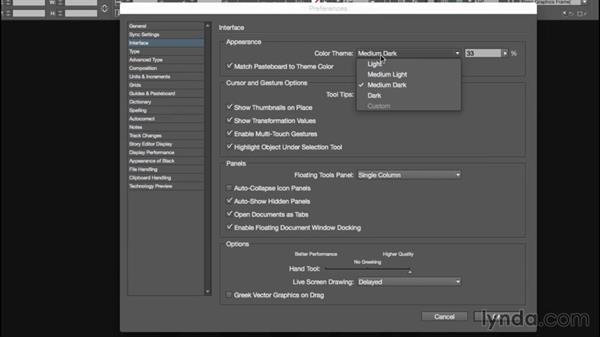 - My copy of InDesign might not look exactly like yours. That's okay, don't panic. It's just because Adobe let's people customize the user interface in various ways. That is all the tools, the panels, and so on. In particular, you can adjust the lightness or darkness of the screen. Now a lot of designers like this dark charcoaled gray. It's soothing to the eye, and most importantly it doesn't distract your eye from the important stuff. The graphics and text on your page. Other designers are more used to a lighter interface, partly because that's the way Adobe's software looked for many years.

You can InDesign's appearance in the preferences dialogue box. To find that, you look in the InDesign CC menu on the Mac and the edit menu on Windows. The location of this menu item is actually one of the only differences between the Mac and Windows versions of the program. Inside the Preferences sub menu, choose Interface. Now there are a lot of things we can change here, but I'm going to focus on the appearance. Right up here at the top, as specifically the Color Theme popup menu. Right now I have this set to Medium Dark, but you can change this popup menu to something else.

You can make it darker if you want, or you can make it much lighter. You can even fine tune the control by changing the slider over on the right. Now the other feature you'll notice here is the Match Pasteboard to Theme Color check box, but I actually don't usually turn that on and off here. I use the view menu. Here, let me show you. I'll click OK and open a new document by going to the File menu, choosing New, and then choosing Document. I'm just going to use the default settings in the New Document dialogue box, and you can see the gray area out here is the pasteboard.

Now let's look in the view menu. Down here you can see a feature called Match Pasteboard to Theme Color. That's exactly the same feature as we saw in the preferences dialogue box, and as you can see it's turned on. That means the pasteboard, that area around the page is kind of a gray color, but if I turn this off, it goes to plain white. Sometimes I have the pasteboard set to the UI color, and sometimes I have it turned off. It really depends on what I'm doing and what kind of document I'm working on. Anyway, the important thing is that if my screen sometimes looks different than yours, now you know why and what you can do about it.