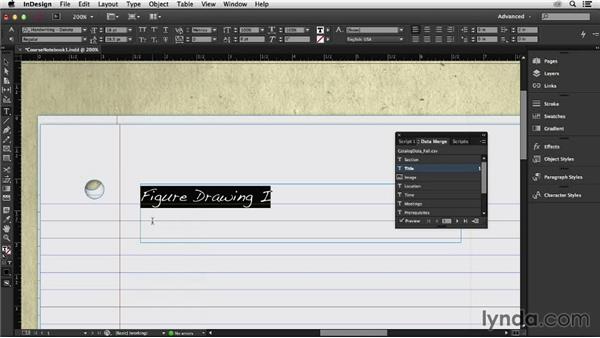 …The amazing thing about doing Data Merge in InDesign is that…you have almost all of InDesign's awesome features to play with.…Including the features in the Effects panel.…If you haven't watched Mike Rankin's amazing InDesign FX…course, here in the online training library, you really owe…it to yourself to look through it because he…shows you how to build truly astonishing effects really easily.…Like text that looks like glass. Or this notebook paper.…This was all created…directly in InDesign.…I've included Mike's notebook paper file in the exercise files folder…for this course and I'm going to use it with Data Merge.…

I have the Data Merge panel open here and I'm going to load in some data.…I'll go to the Panel menu and choose Select Data Source.…And now I'm going to look inside my Links folder for the CatalogueDataFall.csv file.…I'll click Open and it loads it into the panel.…Now I'm going to choose the Type tool click inside…this text frame and then I'm going to click on the Title data field.…I don't see it right here so I'll scroll up.…