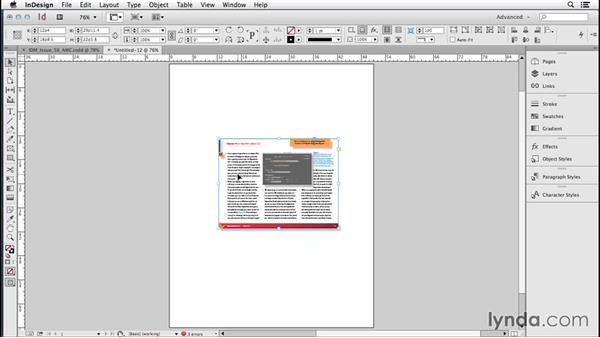 You probably know that InDesign accepts many types of files - text files, image files, sound files, even Quicktime movies. What few people know, however, is that you can also place an InDesign file into an InDesign file. Placing one InDesign file inside another creates a dynamic project with countless possibilities. In this InDesign Secrets tutorial from Lynda.com, you'll learn about placing InDesign Files into other InDesign projects and get some ideas for how to use them.

Which is of course, created in InDesign. Let's say that I'm going to do something like a sell sheet, or a brochure, touting the virtues of this magazine, or a how-to. How we put this magazine together. I'm gonna create a new document. And then I'm gonna place that InDesign file itself. Well you don't need to export these things to PDF, you don't need to take a screenshot. Just place the actual InDesign file. So I'll go to File, Place, and select that InDesign file. And I'm making sure that Show Import Options is selected, that's here, upper left.

Because I want to show you some of the options when you place an InDesign file. They're very similar to when you place a PDF. You see a preview of all the pages. This document has a total of 16 pages, so it's just a section of the magazine, which is much longer. But I like how you can page through, and see previews, and choose which page it is that you want to place. So I'm looking for one that's a combination of text and graphics. This one looks pretty good. So I'm just gonna place page nine. I'm only going to place that previewed page. I wanna crop to the Page bounding box.

If it had a slug or a bleed guide, I could also crop to there. And then I like this under Layers. This is something that I actually just recently realized that you can, hide or show the layers, in an InDesign file, just like you can hide or show the layers in a Photoshop file and an Illustrator file. That was kinda cool. So we're gonna take a look at that in a minute. Right now we're just going to show all the layers that were saved with the InDesign document, and click OK. It contains links to files that are missing or modified.

That's perfectly fine with me for our purposes here. And I'm gonna place, maybe a large version of it. It we look at it in Preview mode, it's missing a border, so I'm going to give it a one point stroke. And of course, all InDesign files have to have at least image that has a drop-shadow. So I'll add a drop-shadow to that. But now, I'm getting a drop-shadow behind everything because it placed with transparency. So if this is happening to you, then you have to make sure that it is filled with Paper.

So fill it with Paper instead of None. That way, you just get a shadow around the entire object. There we'll say, "Take a look at our current issue." And I'll make that a little larger. So I might place three or four pages from the magazine here. Now it didn't bring it in just as an image, it actually is linking to the whole InDesign file. If you look at your Links panel, you'll see that it's actually linking to the file, but it's missing this graphic.

I'm not worried about it, at this point. But what I like about this, is that it's showing us the page number of the InDesign file. And any images that were on there, missing or not, or ones that need to be updated, would be listed under the reveal triangle. I'm gonna zoom in a bit, take a closer look. Let's say that I want this type to be a little bit more readable, in my linked version of it. So I'm gonna go back to the InDesign file, and find my way to page nine. And I'm going to just make this a bit larger, like that.

And, you got all these images missing, but that's not really the point, we're just looking at linking to the InDesign file itself. So that looks good. And I'm gonna save my changes. And just as though you had saved changes to a Photoshop file you imported, when you save changes to an InDesign file that you import, it becomes out of date. So now that I want to, update it. And now that type on the top is more readable. Let's say that later I decide, you know what, I don't want that to appear at all, I just want the text, and the image, and the caption, I don't want to see this little, yellow blurb up here.

I always go straight to the Layers panel, and I'm looking for the name of that layer, but of course it's not there. If you want to edit which layers are showing in this placed InDesign file, select the placed InDesign file, go to the Object menu, and choose Object Layer Options. Now you have to know what the layer name is. In this case I know it's called "extras." So I'm turning off, or making invisible, that layer. And then I'll just click OK, and there you go. So you do have a lot of control over placed InDesign files, especially if the designer used Layers.

Which is always a good idea. I love working with these kind of placed images, they're like a cross between an image, and a document. You can export this to PDF, and the text will be selectable, even in the PDF. It's pretty cool. So the next time that you need to bring in samples of your publications, in a publication that you're creating, just place the actual InDesign file.