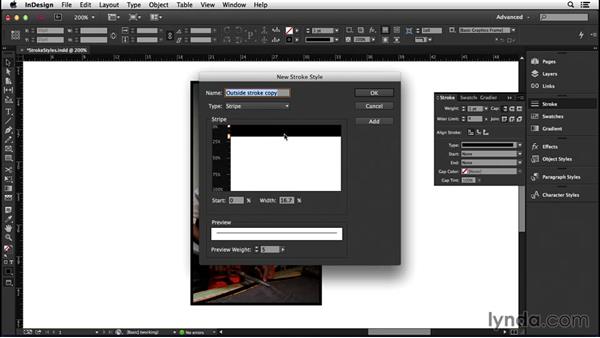 The default InDesign stroke styles may not be quite what you want for your image border. If you'd like something more personal, you can create custom strokes, including strokes that only show up on one side of the path. In this online video, you'll find out how to make your images your own by creating one-sided custom strokes for image borders.

- InDesign comes with a bunch of interesting stroke styles you can use. For example, I'll select this graphic and I'll go up to the Control Panel, and we can see there's all kinds of stroke styles I could have applied, a Triple, and a Thin-Thin, and a Dotted, and so on. But if you don't see just the one you want, you shouldn't be discouraged, because you can make your own stroke styles in InDesign. To do that, go to the Stroke panel, and then open the Stroke panel menu, and choose Stroke Styles. There's a number of them in here that you could start from, or you can just create a new one, I'll do that.

That makes it disappear, it's gone. Now I'm gonna change the name, and I'm gonna call this Outside Stroke. I'll click OK, and let's make another one that's inside. I'm gonna select that, click New, and this time I'm going to drag not the arrow, but the entire black bar up here in the middle. I'm simply going to drag it down to the bottom. I'll call this one Inside Stroke. Now, click OK, and OK, and let's try applying them to this image. I'll select the graphic frame, come up to the Control Panel, and I'll choose Inside Stroke.

Let's go ahead and make this much thicker so we can see it better, maybe a 10 point stroke. You can see that I now have a stroke on the inside, it's actually overlapping the image. I kind of like that effect, but let's try changing its color to white, or Paper, and I'm gonna change this to a Rounded corner instead. That looks really interesting. Let's move this over to the left, and then I'm going to make a duplicate of it by holding down Option and Shift, or Alt Shift, and then drag over to the right. On this one I'm going to switch from the Inside Stroke to the Outside Stroke.

I can't see the stroke right now because it's set to Paper, so I better change that. Let's set it back to Black. It's a similar, but very different look. Let's go ahead and make one more change. I'll select that frame, and then inside the Stroke Panel I'm gonna change the Gap Color from None to Paper. That's almost like adding a mat between the frame and the image. We could change this a little bit, maybe making it yellow and setting the tint down to about 50%. That looks nice. So go play with these custom stroke styles a bit, let your imagination go wild.

Remember, playing with these tools is the best way to learn them.