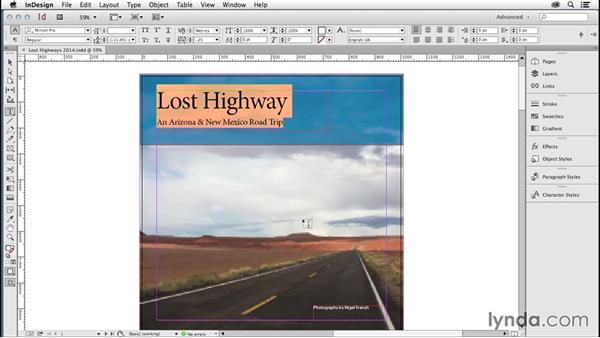 If you're an Adobe Creative Cloud subscriber, you may not know you have a feast of fonts available to you to make your written materials stand out from the crowd and represent your brand. In this InDesign Secrets tutorial from Lynda.com, you'll learn how to add a font from Typekit in CC to give your documents a bold, custom look.

- Here I have the cover to a beautiful photographic essay by my friend and fellow lynda.com author Nigel French. And let's say that as I'm designing this I'd like to experiment with some different typefaces. Because I'm a member of the Adobe Creative Cloud because I subscribe to it, then I have at my fingertips hundreds of other typefaces that I can use and they're so easy to add and use immediately right in InDesign in my current project that I want to spread the word about it in this video.

Say for example that I want to change this typeface used in the title. I'm gonna select it and then go to the Creative Cloud menu and choose Fonts. And all I want to do is check out some different fonts on Typekit. Typekit is the service that is included with all Creative Cloud subscriptions. Here are the two fonts that I've already added via Typekit and I'm gonna go to Typekit to add something else. When you choose browse fonts it immediately jumps you to your default browser and brings you to the Adobe Typekit page with desktop use button already punched down.

Meaning that the only fonts that you're looking at here are ones that you can use on your desktop. As opposed to the original version of Typekit which was mainly for web fonts if you wanted to use cool new typefaces on your websites. You can scroll through here and browse, you can also choose different properties, upper or lower case, different classifications. So in this case I'm gonna choose a Slab Serif for my headline. You see there's not a whole lot of selections here but they are adding fonts everyday.

So I'm gonna grab this guy, Create Rounded. And it tells you that there are other styles for this font. You can look at specimens and so on but this is good. I'm just gonna click use this font. I want you to grab both of these and please sync those fonts. So what it's doing is it's downloading these fonts to your computer. You don't need to install them. They automatically are installed in your operating system. I can close this and jump back to InDesign, and now I want to look for Create Rounded in my menu.

So I'm gonna go to the type menu and say just show me the ones from the Typekit. There it is. That looks great. The Typekit fonts come with some special licensing. If I print this that's perfectly fine. If I export it to PDF and embed a subset which is the usual default way InDesign works, that's fine too, I could send this to a printer. If I choose File, Package though it does not include the Typekit fonts in the package. Let's see what happens because actually this document uses other Typekit fonts as well.

So I'm gonna package this and I guess we'll save the document, and I want to package it onto the desktop. I don't need to include the IDML or PDF, those are two new features in the latest version of InDesign. And we'll package that guy and we get the usual warning about the fonts. Let's take a look at that folder. So in the document font you see that all we have is MinionPro-Bold and regular which were the only non-Typekit fonts that I've used in this document.

If we look at Find Font under Type, we'll see that we also have felt tip, the create that we just added and this one soleil regular. Now let's close this document and remove those fonts from the Creative Cloud menu. I'll go to manage fonts and I'm going to remove the ones this document uses. Now let's go ahead and open up that InDesign file from the package folder. So you can see what happens. If you give an InDesign file to somebody who doesn't have the fonts loaded.

Desktop, Lost Highway. If the person that opens it is a Creative Cloud subscriber and is running the application, InDesign will automatically find those fonts on Typekit and suggest that you sync to them. So I'll say yes, please sync. If the person does not have Creative Cloud or they're not running the application then they won't be able to get those. But the thinking is if you're sharing an InDesign document with somebody else you have CC and they have CC, so of course they're going to have Typekit.

All in all, I think it's a very sleek system for browsing and adding great new fonts to your documents and it's one of my favorite features of being a Creative Cloud subscriber.

Video: 177 Add a font from Typekit in CC