169 All about All Caps (change case open type option) 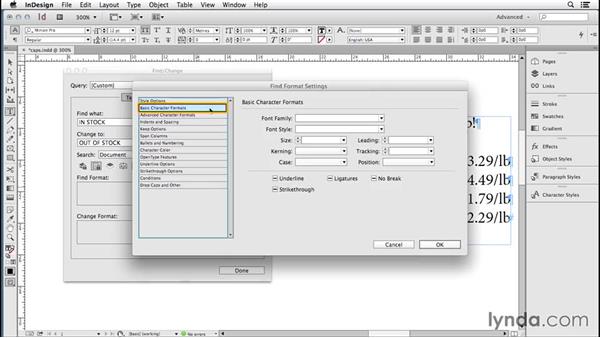 Sometimes you may want to use all caps in your document to grab attention, convey importance, or to highlight list or table names. Whatever your reason, it's important to give some thought to the method you use. In this InDesign Secrets tutorial from Lynda.com, you'll learn the different ways to format all caps text and what you need to consider when choosing one.

- [Voiceover] What is the difference, if any, between these four instances of the same phrase in all caps? At first glance, they may actually look exactly the same, but they act different underneath. This often catches InDesign users off guard. I wanted to cover that in this video. Let's say, for example, that we want to search a catalog for the words "in stock" and we want to replace it with "out of stock", but we don't want to do that for every phrase of in stock, we just want to do it to these ones that are in all caps. Let me move this over to the right a bit and then I'll go to the edit menu and choose Find Change.

I want to search for only in stock in all caps, so that's what I'm typing. We want to change it to out of stock. Search the documents and we're going to start searching right here. This is a new feature here in 2014 of InDesign. You can search forward or backward. Forward is the default. I'll say find next. Why did it find that if I typed in stock in all caps? That's because I forgot to turn on the case sensitive button. If you want to filter all the finds to only ones that match the same case, you also have to remember to turn on that button, not just type it in all caps.

Choose find next. There we go. That's better. What happened? Why didn't it find these other two? Try that again. Find next, same thing, but this is in all caps. Actually, it isn't. In InDesign's brain, this is not all caps. This is formatted as all caps, but it wasn't entered as all caps. Take a look up at this button right here that formats things as all caps. Obviously, if I select in stock in lower case, that doesn't highlight.

Now click over here and say find next and it found that instance. That one, that one, but that's it. It's one or the other, not both. You might think that I'm about to say you should use this way to make all caps, but I'm not going to because both ways have their uses. Usually, I like to format things as all caps. I'll take something, I'll take the text from the client. I'll go ahead and make it all caps here and then I'll create a new character style, all caps, because formatting text via styles is always more accurate and more flexible.

Should I change my mind later, I can just edit the character style so that all caps is turned off and it's made into small caps or just turned off completely. On the other hand, in some instances, when you export text to certain systems or XML format or something, it doesn't understand the formatting for all caps. It will export it with strange characters or it will lose the caps. Instead, it requires that you start with hard caps. To do that, you would need to select the text that's been formatted as all caps and actually change the case from the type menu to upper case.

Now we've got a belt and suspenders method, but actually, it is the belt that's going to win. This is definitely all caps text and even if I selected it and I turned off all caps, it still stays all caps. Did you see what happened to that text when I did that? Let me undo real quick. I'm going to turn off the caps. Watch the width of this selection. You see how it shrinks in a little bit? That's something else I wanted to show you. I have a better example down here. When you format something with all caps and you're using an open type font, as we were above and as we are here, this is Adobe Caslon Pro, then the open type font will usually add more error in between the letters.

That's why the same exact word in all caps can have a different width when it's hard encoded as all capital letters versus formatted as all caps. Now that you know the ins and outs of how all caps work in InDesign, you'll be better prepared for all capital situations.

Video: 169 All about All Caps (change case open type option)