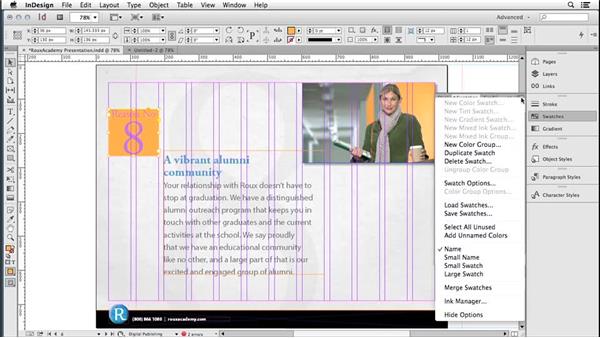 One of the keys to preparing professional-looking presentation slides is knowing how to maintain color consistency. Copying and pasting colors to each slide or document is one way to do it, but it can get cumbersome when you are working with multiple slides. Instead, you can create Swatch Exchange sets. In this online InDesign tutorial, you'll learn all about sharing swatches, specifically how to create, save and share swatches with others working on the same project.

- When you're creating a series of pieces for the particular project or client it's important to maintain color consistency. So if you were looking at a presentation done for Roux Academy that has a number of RGB colors and one errant CMYK color. If I want to do another piece using the same colors, how do I get these exact colors over to the other file without having to recreate them from scratch? Well, an easy way with InDesign is simply to copy and paste. Reason number 8 is colored this lavender color, so I could select this and then copy it and then go to another document and paste it.

And that brings the color over. Another way to move colors from one InDesign document to another is to load the colors. So I'm going to undo, what I just did, and then in the Swatches Panel Menu I'm going to choose "Load Swatches". And then I'll navigate on my hard drive to where the source document is located and select that InDesign file. When I click "Open", then all the colors are added at once to this document. And that's fine if that's what you wanna do, but sometimes you just wanna pull a few colors from one InDesign document to the next.

I'm going to undo that, so the compromise between copying and pasting and bringing everything over, is to create what's called a Swatch Exchange Sets. What you do is in the source documents, select the colors that you want to copy over into a new document. So in my case, I'm going to select these three colors, and then I'm holding down the shift key to select them all. Then I'm going to hold down the command key, or the control key on a PC, to also select deep yellow. I don't want to get the gray.

Now with these four colors selected, I'll go to Swatches Panel Menu and choose "Save Swatches". It saves them as an .ase, for Adobe Swatch Exchange file. I'll just call it "roux colors - new", and save it on my desktop. So if I were working in a workgroup, I could save this file on the server, for example, and then everybody who's working on the Roux Academy project, could load the same colors and we could keep consistent that way. Now click save here, (laughing) I accidentally colored that, say "None", ok, let's go to "Untitled" and this time we're going to load the Roux colors.

So, I'll go to the Swatches Panel Menu and choose "Load Swatches" again but instead of choosing the InDesign file, I'll choose the .ase file, choose "Open", and then just the colors that I wanted to appear there, appear there. ASE also works with Photoshop and Illustrator. Let me jump over to Illustrator, for example. Here I have a document open, that I want to work on for Roux, so I'll go to the Swatches Panel Menu in Illustrator. Go down to "Open Swatch Library", doesn't say "Load Swatches", choose "Other Library" at the very bottom, and then navigate to where I have my .ase file.

Click "Open" and they are added, in a new panel, so you can see I had done this for a different project earlier. In Photoshop, it's almost the same thing. You go to the swatches menu, go down to "Load Swatches", choose the .ase file and open it up. They get added to the end of the list of your existing swatches, and if you hover over them, and pause for a second, you'll see even the names came through as well. The next time you want to make sure that all the colors are consistent between the different projects that you are creating for a particular client, try saving your colors out as an ASE Swatch Set.

It's faster and easier than copying and pasting.