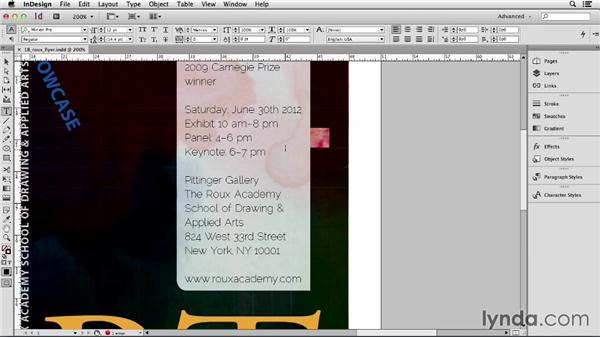 Dealing with missing fonts can make it hard to finish an Adobe InDesign project, and it can be risky to install a font on the system without knowing what rights are associated with it. This online tutorial explains two ways to utilize a font in InDesign without actually installing it through the Windows font installation feature. The first method uses a Document fonts folder, for document specific fonts, and the second method uses the fonts folder within the InDesign application directory.

- [Instructor] Somebody sent me this file, 18 roux flyer, and when I double-click on it to open in InDesign, InDesign tells me there's a missing font, Railway Thin. That's interesting. If I click, OK, InDesign won't tell me where it's actually being used, but I could choose, find font, from the type menu, and then choose it in here, click find first, click done, and you'll see all this text is selected. That text is supposed to be in the Railway font. Now if that person sent me the font along with the document, I might want to use it, but I probably don't want to install it onto my system unless I have the rights to use it.

So how can you use it if you don't install it? Well, here's the trick. I'll close that document and go back to the finder, or on Windows, Windows Explorer, and I can see that I've downloaded this font from The League of Moveable Type. It's an open source font. It's a really cool font, this Railway Thin.otf, that's the open type font version. And I'm going to show you two ways that you can install a font without really installing it. First, I'm going to hide InDesign in the background here, so I can see my document again. And I'm going to create a new folder here called, Document Fonts.

Any time you open an InDesign document and InDesign sees that there's a document fonts folder next to it, it will look inside that folder for the fonts. So I can move this font right into that folder, or you could duplicate it, or make an alias, or a shortcut inside that folder. And now when I open the InDesign document, InDesign will find it. There we go. That's the font I was looking for. Now the cool thing about putting fonts in the document fonts folder is that they only show up in this one document. If I select some text here, come up here and look inside the type menu, I can look inside the font submenu, and I can see that it shows up here at the top.

Those are the most recently used fonts. And it also shows up in the document only submenu. There it is, Railway. But it only shows up here in this document. If I create a new document, or switch to some other document, it will not show up. I'm going to go ahead and close that document and switch back to the finder again. And let's go ahead and hide this, so we can see what we're doing. And I'm going to open that document fonts folder and move the font back into its folder. I'm doing that because I want to show you another way that you can install a font without truly installing it.

And that is, you can put a font inside the fonts folder, which is inside the application folder. There's InDesign, there's my actual application, and next to it is this fonts folder. So I can take that same font and drag it into the fonts folder in here. Or I could install a alias or a shortcut into that folder back to the original font. In this case, only InDesign can see the font. It won't work in Photoshop, or Illustrator, or any other programs, but any document that you open in InDesign can use that font.

I'll double-click on this, it opens up, and once again you see that InDesign is applying the correct font to that text. These two font folders, the font folder inside the application folder, and the document fonts folder that you can put anywhere next to an InDesign document, are two of the great InDesign secrets that you really need to know about if you want to be super efficient in this program.