153 When InDesign ignores your leading values 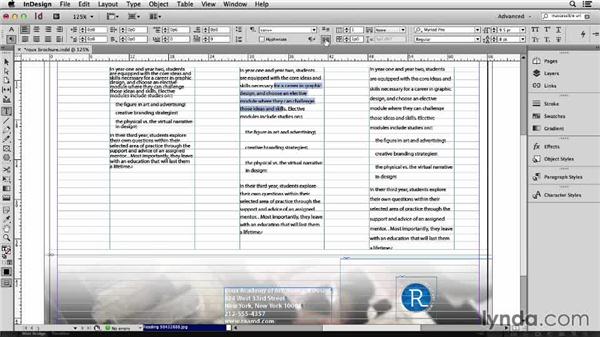 It can be frustrating when InDesign ignores your "letting" command. This usually happens when text frames have been set to align to baseline grid or are vertically justified. In order to make InDesign pay attention to your letting setting, you must turn off vertical justification. In this InDesign tutorial, you'll learn what to do when InDesign ignores your leading values, and how to turn off vertical justification.

Don't you hate it when InDesign just ignores you? Like here I am setting the leading in these three text frames? These three text frames, I'll have the same leading and the same type size but it is ignoring what I'm telling it to do. Check this out. Switch to the Type tool and I select some type in the first frame let's zoom in a bit. See them a little bit closer like that. It's merely pro 9.5 solid. Nine, five on nine, five leading. What about this one? Merely Pro? Nine, five on nine, five.

What about this one? What the heck? Why is it not paying any attention to my leading? Let's say I select it and I want to change the letting to eight. So I'll select it right here and I'll say eight. It's not doing anything. It's not changing anything. What is happening here? I can tell you that there are two times when InDesign will completely ignore what your setting for leading. Here, everything is fine. If I select this type and I say make this eight point, it goes to eight point. Here it's not, and here it's not either.

I'll select that and make it eight point just to show. It just made it a little bit smaller but it's definitely not eight. Well it's, I'm going to undo that, what's happening. The first instance, this is one bad boy, this has been set to align to grid. Align to baseline grid. And if I go to the View menu, down to Grids and Guides, and say, show me that baseline grid, you can see that these lines are set to automatically align with the baseline grid. These guys are not because align to baseline grid is a paragraph setting.

It's a paragraph attribute that can be applied as an override or be part of a paragraph style. How can you tell if Text has been set to Align to Grid, other than not paying attention to the leading that you're setting. Select some type. And then go to the Control Panel in Paragraph Mode. And look right here. This is aligned to baseline grid. This one is the one right above it which is, do not align to baseline grid. So we know the answer to that one.

What about this guy? If I select it, it is not aligning to baseline grid. Why does it have such strange, leading. Now that's because this guy is the other problem child. Let's, let me hide the baseline grid, because that bugs me. What's happening here is that this text frame has been set to vertically justified. If I edit text in here, if I add some text, hello, and hit return a couple times, all that's happening. Is that InDesign is reducing the amount of spacing in between all the lines.

In fact, I could drag this text frame, and make it taller, or smaller, shorter. And it's always going to have the first line start at the top. The last line. The baseline of the last line sit right on the bottom of the frame. And everything else is going to be space in between. And if I make it too short by the way, we will get an over-set at some point. You can see there that it's reducing the amount of leading here, when I get really short then it goes over-set because it has gone beyond the bounds of its original leading.

Where do you create vertically justified text frames and how do you turn that off if you don't want it turned on? You'd select the frame with the selection tool. This is not a paragraph thing. It's a frame thing. And then go to the object menu. Go to text frame options, and you'll see the setting right here, under vertical justification. The default setting is top, for the text to start aligning from the top, and then, when it aligns from the top, whatever you set for leading, and for space above and below paragraphs is intact.

It's only when you turn on justification that all that flies out the window, and InDesign starts adding spacing willy-nilly. That willy-nilly. There's a method to it's madness and it's a pretty cool feature. But those are the two instances when InDesign does not pay any attention, or more correctly has to override the leading that you set.