151 Looking at snippets vs. libraries 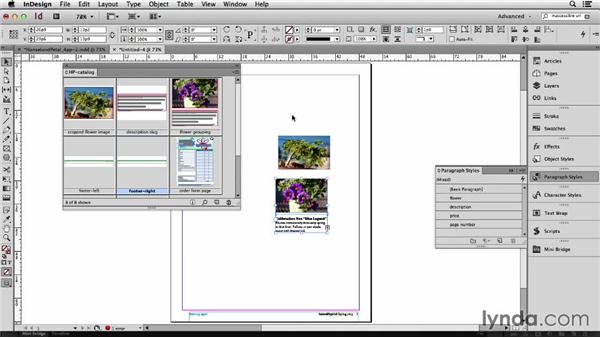 In InDesign, snippets and libraries reference reusable content within the application. While they are similar, there are a few significant differences with these two items. This video explains what a library is and how to use it, how to select and create reusable objects, what snippets are and how to use them, and the circumstances of when to use a library versus when to use a snippet.

What is the difference between a snippet and a library? I hear that a lot. And which one should we use? That's what I want to talk about in this video. Snippets and libraries are referring to the same thing, which is a reusable piece of InDesign content. Anything that you can select in InDesign with the Selection tool. This text frame, this picture, this group, this entire page can be turned into a reusable object that you can use in another InDesign document.

So, instead of having to open up an old InDesign document, find what you want, copy it and paste it into the new InDesign document, you can have a collection of these individual elements and save them in a library or save them as a folder of snippets. Now, libraries are, I think, the most convenient way to have complete access to all of your snippets in one place. It's a single file that can be moved around and acted upon like a panel in InDesign. I've already created a library of elements from my garden catalog here.

And I've saved it into the project folder, so I can just go to File > Open, locate the library, it ends with .indl. And it opens up as a panel. It has little thumbnails of all of the objects that I've already added here. If I wanted to add another object, I can simply drag and drop. It comes in with the name of the image if it was just a single image, or I could double click it and call it something else, like cropped flower image. If I'm trying to get the same size in another document, I could just go to the other document, drag and drop that in, and then replace this picture with something else.

And I have the exact cropping and measurements that I need. In this other document, I could also drag any of these elements like this one here called, I'm double clicking on it to see it, flower grouping. I drag and drop it in. And it comes in with the picture and the text and the amount of space that I want in between, and it also brings over any paragraph, character, table, or object styles that are used here. So it's a really great way to move styles from one document to the next as well.

With the library, I can change the view. Right now, the default is Thumbnail view. But if I have a ton of things in here, I could change it to List view or Large Thumbnail view. I can sort things. I can even do a find in my library. That's what Show Subset does, it lets you search for things in the library according to their name, when they were created, or what it says in their description. Because a, frequently you might have 50 or 100 things in a library, like all of the ads, all of this, display ads that your customers give you for your magazine or different arrangements of pictures with captions for a photo spread and so on.

One more cool feature of libraries is that you can select one of the library items and instead of dragging and dropping you can use the library fly out menu and choose Place. And when you do so, it places the item at the exact same page coordinates that it had when you first added to it the Library, perfect for things like Footers and Headers. Here, it comes in as a perfect footer too, correctly placed. But what's not so great about Library is that only one person can open this Library file at a time. So, if you're working other people and a bunch of you need to access these items inside of a library, you're going to have to duplicate that file, that INDL file and give it to people and then when somebody updates something in the library, like let's say, you know ,we're changing our footers and headers, you're going to have to update all those libraries.

Another problem with libraries is that they are InDesign version specific. This library was created in InDesign CC and it can only be opened by InDesign CC. When InDesign CCC comes out, I'm not going to be able to open up this library. Like, if your CS6, you're not going to be able to open up any libraries that were created in CS 5 or 5.5 or 4. Instead, you have to drag all these guys out, save them and then open up that file in the later version then recreate the library.

Now, these disadvantages are not a problem with snippets. A snippet is when you take an object on the page or anything you selected with your Selection tool, like say these two things and then you export them as a snippet. You go to Export and you choose Snippet. InDesign snippet. You can also drag and drop from InDesign into Bridge to create a snippet or into the finder to create a snippet. And I have done so, I've exported all these things as snippets. I am going to put this in the dock over here for now.

And you can access all of your snippets from any folder on your hard drive or on a shared device, like a server. Or even in Dropbox, in a Dropbox folder. So here I have them in a folder in Mini Bridge, or I'm going to access them via Mini Bridge, which I think is a great way to well, work with your snippets. So, inside my client files folder, I have a folder called snippets, where I keep all the snippets that I use for all my different projects. I double click on here and I have one for, just for a magazine that I work on.

And here's the one for the catalog. These are the same objects that were in the library, but because I'm looking at them in Bridge I can see previews of them, or Mini Bridge which I think is a little bit more convenient, and I can drag and drop them from here as well. So, if I create a new document I can drag and drop these guys. Just like that, and if I wanted to have it automatically placed with the same coordinates, like I can with a library, you can do so with snippets too, because there's a preference setting. If I go to InDesign > Preferences all the way down to File Handling, there's a little section just about what happens when you import a snippet.

Should it be positioned at the cursor location, meaning its upper left hand corner will go whenever you clicked with the cursor, or should it come in at the original location? So, if I said Original Location and click OK, then I can place a snippet and it should come in at its original coordinates. Because we just have one folder full or our snippets, then anybody can access this on the server, anybody's who's got access to this folder. We don't have to worry about having one private library file that needs to be duplicated for anybody who wants to get in there.

So snippets are a lot more flexible, in my opinion, than libraries, but they're a little bit harder to manage. If you're working by yourself, you might as well just stay with a library. If you're working with a group of people, or you need to share snippets among different versions, because these snippets can be opened with different versions, then you want to go with snippets.

Video: 151 Looking at snippets vs. libraries