150 Rotate text inside a frame, or the frame around the text 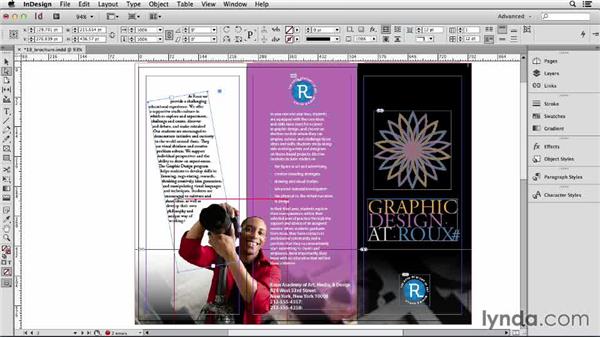 InDesign offers many features for manipulating text within a frame, but it's sometimes difficult to change the text without changing the frame, and vice versa. This tutorial explains how to rotate text inside a frame without the frame moving, or how to change the angle of the frame while keeping the text the same.

Everyone knows you can rotate a text frame, to any angle you want. For example, I'll select this text frame here, go up to the Control Panel, and change it to say, ten degrees. Hit Enter and the entire frame rotates. But it's not just the frame, of course, the text inside the frame rotates too. But what if you want to rotate the frame, and not the text? Or what about rotating the text, but not the frame? You can do both of those things in InDesign. But in both cases, you have to be a bit clever to pull it off, and pay attention to which tool you're using.

Let's undo this by pressing Cmd+Z or Ctrl+Z on Windows. Remember that the selection, the black arrow tool, that first tool in the tool panel, always rotates both the object and anything inside the object. But the second arrow, that white arrow, that direct selection tool. That just changes points on a path. So, if I head over there, and select that tool, the direct selection tool. The frame changes slightly. I've now selected the points, on that path. Now, if I go up to the control panel, I get a completely different effect.

If I change this to ten degrees, and hit return or enter, you'll see that the frame changed. It rotated, but the text did not. I only changed, the rotation of the frame, itself. That's kind of an interesting effect. Let's go ahead and click off here in the paste board, and go into preview mode by pressing the W key. And you can see that you can see, that you have a very different look to your text tray. Now what about rotating the text, and not the frame? Well, let's undo that with a Cmd+Z or a Ctrl+Z on Windows, and this time I'm going to select the selection tool, the black arrow tool.

Let's click off here in the paste board, and we can see the effect. Now, I'm not saying you ought to do this to your text. I'm just saying you can. And it's really cool that you can in InDesign. And both of these tricks actually make sense, when you remember that text frames don't have to be plain or rectangles. You can manipulate frames, just like a regular path that you draw with a pen tool. Text frames are just paths. Paths that are closed, and have text in them.

Video: 150 Rotate text inside a frame, or the frame around the text