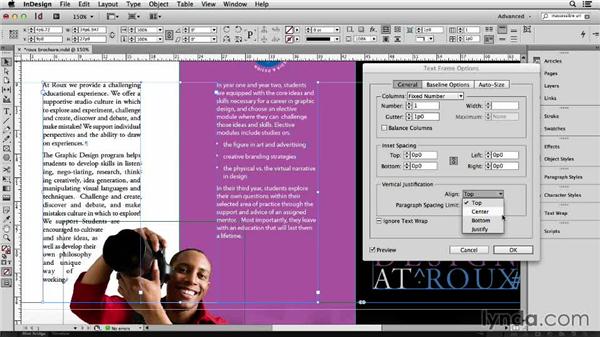 We're looking at the outside of a three fold brochure. This panel on the right, the black panel is going to be the front cover. This magenta panel will be the back, and then this white flap over here, will be folded inside. Because this left panel and middle panel won't be seen side by side normally, I'm okay with the text looking slightly different. This text is obviously white, but it's also a different font and a slightly different leading. You can see it's Myriad Pro, 9.5 on 12.

Then this block of text over here, which is 10.5 on 12.5 Garamen Pro, but let's say for aesthetic reasons, that I want these two text blocks to look somewhat a little bit more similar, by having them start and end at the same place on the page. In other words, right now they're both starting at the same place, vertically speaking, but they're not ending. This one is ending way down here, and this guy is ending a little higher. I want them both to end at the same place. Let me show you how easy that is to do in InDesign.

First you want to make sure that your text frames both end at the same place, because what we're going to do is we're going to fill the text frame with the text. And they do, they both end at the same place, and they're both the same hight. In other words look at this, the height is 27p9, and this one is 27p9. That's perfect. Now you might think, okay well now the next step is to select all the text, and then start editing the leading so that we add more space. Or maybe figure out how much space we need to add in between these paragraphs to make them come out even.

No, no, no, no, no, that's too much work. Instead we're going to use the wonderful text box justification setting. Now a lot of users may not even realize it's there, though it has been there since I think the beginning of time. But it's an option in InDesign to have InDesign automatically fully justify the text in a text frame, not just horizontally like you can with a paragraph, justified paragraph, but also vertically, what used to be called feathering, by adding a little bit of space between every line. Let's go ahead and do this for both of these.

I'm going to Shift-click both of these frames. We'll zoom in a bit, so it's a little easier to see. Drag this over to the right because we're going to open up a dialog box, which is under the Object menu. Go down to Text Frame options, and the setting that we want is right here under Vertical Justification. The default is that text starts from the top of a text frame, and that is only because that's the default setting aligned at the top. You could also have text aligned vertically at the center of the text frame and grow up an down from there or start at the bottom and grow up from there or, the one that we want, which is justify.

I've already turned on the Preview check box. so when I choose Justify, uou can see how In Design added space in between the lines and the paragraphs of both of these, and now they both end at the same point. What's interesting, and I'm going to click OK, is if you click inside these text frames with your type tool, leading will still show that it's only 12 point. The data is 12.5. It shows the original leading. So if you're a little confounded in a text frame that you're working with and thinking why doesn't what I see match what the read out is saying, then it might be because somebody applied vertical justification to that text frame and a quick way to check is to simply resize the text frame with the Selection tool.

Just to make it shorter and taller. And if it constantly fits perfectly, then that's probably a vertically justified text frame. Now if you make it too short, it will over set. So let's not yet, but there it goes. So once it gets to its actual leading amount, and if you make it smaller than that, then it will go ahead and over set. One more tip that I want to mention is that you do have some control over, what happens when you vertically justify in regards to the spacing.

Let's say for example that you do not want InDesign to really add this much leading. You'd rather it add more space above these different paragraphs. You can control that by going back to Text Frame Options. I have this text frame selected. That's what paragraph spacing limit is about. Right now, it's just evenly adding the same amount of space between every line in the text frame, regardless if it's the first line of a paragraph or not. But if you'd rather it add more space in between paragraphs, as opposed to in between lines, then increase the paragraph spacing limit.

Like, let's say that I change this to 0.25 inches. See what it did. So the leading reduced, and we have more space in between here. What if I just said three inches? Then it really squeezed it, and it made it completely fit. So you can find some happy medium that will completely fill the text frame and pressing Cmd or Ctrl+B right now. To open this up, but still make it clear that there are distinct paragraphs here. I think I'll put 0.5 inch. That looks pretty good. That's how simple it is to completely fill a text frame from top to bottom, and have InDesign take care of adding the spacing for you, on the fly.

Video: 149 Using vertical justification to spread out text in a frame automatically