148 Cropping with paste into 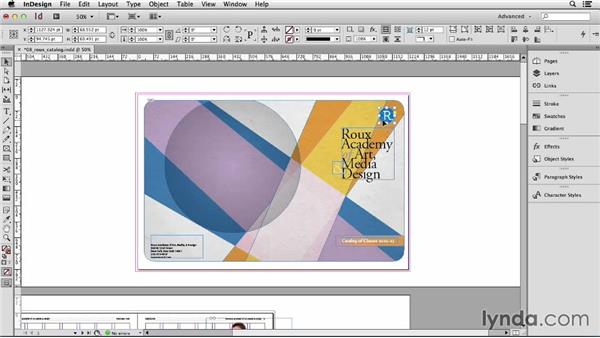 The Paste Into command in Adobe InDesign provides a way to incorporate objects into a frame, but there are a few complications that occur when using this command. This training course explains how to group objects so they can be pasted with Paste Into, how to select objects nested within other objects, and how to manipulate layers with this tool.

I find in design is generally pretty intuitive. But I will admit that there are certainly some features that are not obvious at all. At least, they're not obvious until you see them in action once or twice. For example, let's say I want to crop out this whole design, and put it into a rounded corner rectangle. Well, it's easy enough to make a rounded corner rectangle. I'll just choose my frame tool here and drag out a rectangle. Then I'll head up to the control panel and set the corner options to rounded. Let's make them really rounded, maybe like 50 points.

And I'm going to choose Paste into. But I can't. Why not? Why can't I paste that stuff into that rounded corner rectangle? Well, there's a problem. You're only allowed to paste one object at a time into a frame. So you can't do all of those objects into this frame. What you can do though is, let's undo that. Go back to placing it. What you can do is, while all of those objects are selected on the page, you can go to the Objects menu and group them.

That's the trick. Grouping objects makes them act like a single object. And once you have a single object, you can paste it into another object. Now it doesn't look like anything is selected on the page, but that's only because those dashed lines that indicate a group are outside the boundaries of this page. In fact I can see that by pressing Cmd+Minus or Ctrl+Minus on Windows. And you'll see, there it is. There's the group. It's selected, so once again I'll cut it to the clipboard, then select my rounded corner rectangle. And this time I can Paste Into.

That's terrific, but there's a couple more things that I want to tell you about this Paste Into feature. First, if you have an object that's inside another object, you can reach in an select it by double clicking. For example, let's say I want to move this R, this graphic here. I can double click and it'll select the group inside that rounded corner rectangle. Double click again, it selects that actual object. Now I could move it or delete it or do whatever I want with it. Let's say I want to take it out of that object. Outside of the nested object hierarchy.

I'm going to drag it right to the top of this layer. And now it's no longer in this nested group. I can move it anywhere I want. I could even put it out here if I want. All right, let's go to the next spread. I'll press Option+PgDn or Alt+PgDn to jump down here. And I want to point out something that's a little bit non-intuitive about the Paste Into feature. I'm going to grab an ellipse. I'll just go to the Graphic Frame tool here and grab the Ellipse Frame tool. And I'm going to drag out a circle on top of these two people on the left edge here. Let's zoom in a little bit so we can see them better.

Let's put this picture into that ellipse. I'll grab the selection tool and select the picture and go to the Edit menu and cut it to the Clipboard. Now I can choose that ellipse and use Edit > Paste Into to put that picture and its frame into that oval. Notice that the two people that I circled originally are inside that oval. In other words, when I use Paste Into, it place the picture in exactly the same location inside that circle. But let's undo this a couple times. Cmd+Z, Cmd+Z, or Ctrl+Z on Windows and go back to where it was.

This time, I'm going to move that circle up here instead. Now, I'm going to grab that image, select Edit > Cut, come over to this circle and say Paste Into. Totally different effect. Now these two people are inside the circle. What's the difference? Well, here's the thing. Let's undo, and undo, and undo again and bring it back down here. Here's the trick, because this oval was touching the graphic, it was overlapping it a little bit. InDesign knew to put the graphic in exactly the same location.

But when I move the Ellipse over here, InDesign had no idea what to do with that. So when it Paste Into, it centered the graphic inside that Ellipse. So if I wanted to make sure the two people on the right were inside that Ellipse, I would first put the Ellipse in exactly the right location, then select that graphic, cut it to the clipboard, and then use Paste Into to put it inside. And you'll see it's exactly in the right location. Now I can move it anywhere I want. Paste Into is one of the coolest and most important features in InDesign, and now that you've seen how it works, you're going to find dozens of uses for it.

Video: 148 Cropping with paste into