146 Make a transparency mask in InDesign 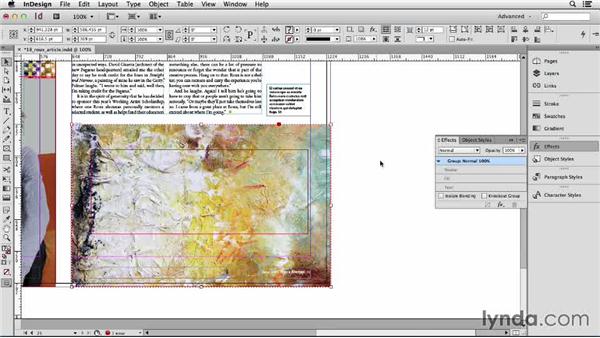 Masks allow you to mask away objects, making them invisible so that it appears you are looking through it onto another object. While this is a common in Photoshop or Illustrator, it can also be done through InDesign. This online tutorial will show you how to make a transparency mask in InDesign that will add visual edge to your design.

If you've used Photoshop or Illustrator before, you probably know the concept of a mask. A mask, well it masks away part of an object, making it invisible so that you can see through it or past it. Masks are really useful in a wide variety of effects. But you can can look high and low and throughout InDesign and you won't find anything with the name mask in it, but that doesn't mean you can't make a mask in InDesign. You just have to be clever about it. Here's how it works. I have three different objects that I'm going to be working with. The background image, in this case this red, orange piece of art.

The foreground image, this kind of yellow, white piece of art. And my mask, which is going to be the word art. I'm going to put one on top of the other. So I'll put my white art on top of the orange art, so that you won't be able to see it at all. It's opaque, right? Cannot see through it. Then I'm going to put my mask on top of that. I'm going to be using this word art as a mask to punch a hole through this white yellow piece of art so I can see the red art behind it. To make it work it's a three step process. First, open the Effects panel and apply a zero opacity to the mask itself.

In this case, it's that text frame. I'm going to select the opacity just by clicking on the word Opacity and set it to zero, and then hit Return or Enter. That makes that mask, that text frame, completely disappear. We cannot see it at all. Step two is to select the mask, that text frame, and the artwork or the object that I'm trying to punch a hole in. So, I'll simply Shift+click on this background art. So, I have two things selected. The object I'm trying to put a hole in and the mask itself sitting on top of it. And while both of them are selected, I'm going to group them by going to the Object menu and choosing Group.

Finally, I'm going to turn on the mask feature. Like I said, nothing says mask feature, but I'm going to tell you where it's hiding. Inside the Effects panel, there's a little check box called Knockout Group. Well, you've probably seen that and you've wondered what the heck does that feature do? Well, I'm going to tell you. It forces the effect, the transparency effect, in this case, that opacity to only apply inside the group and to the entire group. So, as soon as I turn it on, it applies that 0% opacity to the entire group.

And there you go! There's the mask on the object. Now, the great thing about masks are they're editable. You can change them really easily. So, in InDesign, all I have to do to go inside this group is to double-click. Double-click. And I've selected the mask, that text frame once again. And now I can move it. And you can see that it's completely editable. I can move it anywhere I want, and it will automatically update. I can even double-click again to select inside that text frame, and edit the text. So, I'll just delete the word art and I'll type a different word.

Masking in InDesign is so easy, as long as you follow those steps. Now, I do need to point out something important. Let's go and make a PDF of this. I'll go to the File menu, choose Export, and then I'll make a PDF up on my desktop. I'll just click Save. PDFs of these kind of transparency effects work great when you open them in Adobe Acrobat. But if I make this PDF and open it in, let's say, Mac Preview, or some other non-Adobe PDF reader, it might not look right. You might not see the transparency effect properly.

And then you'll be coming to me saying, hey, your trick didn't work. Well, the trick works fine. But non-Adobe PDF readers don't always work fine. However, if you need to make sure it works no matter what reader someone opens the PDF in, then make sure you export this in the Acrobat 4 format, which you can get by choosing the PDF X1 A PDF preset. You see, that changes compatibility to Acrobat 4. This does what's called flattening the transparency effect behind the scenes inside the PDF, so that it'll work right everywhere.