145 Ghosting area of image behind text 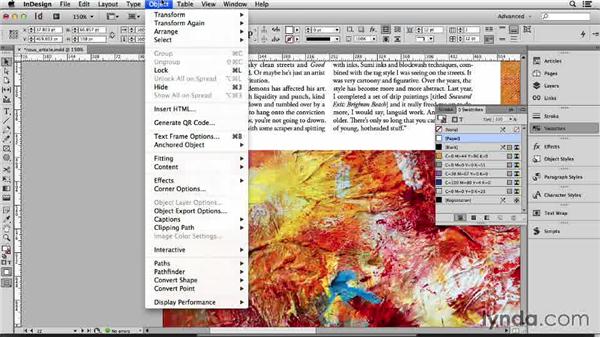 There is only so much space on page, which means that you must find creative ways to place text without interfering with the artwork and images they have created. One way to fix this issue is by using InDesign to ghost the area of the image behind the text. This online video will teach you how ghosting an area of an image behind text can help designers add more text without sacrificing space.

Sometimes, because of space reasons or because of artistic reasons, you want to put text on top of the busy background. Like in this magazine spread, take a look at the caption on the left. We have, this text is only eight points, and it's on top of this beautiful abstract artwork. A little hard to read, as compared to. This caption over here on the right. So what's a good way to make this a little easier to read. I'm going to zoom in and I'm going to to show you a nice little trick that you may not be aware that you can do, in InDesign and it works in basically any version from the past 10 years.

And you can see that I've also set an inset here to set it back from the edges of the. Text frame that would also be good idea, you do that from the object menu, to the text frame options, and in inset spacing you know, back it off a bit from the edges. Click OK. Now the thing is that this looks way too harsh and too dumb actually, so we're going to ghost this back, and you do that with the Effects panel, which should be part of your doc, otherwise just go to the Window menu.

Go down to Effects and choose it right from there. And then select the object. And you can see that the opacity of the object is 100%. And if you want, you can reduce the opacity of the object itself. But notice how the type itself becomes, semi-transparent. And that's usually not what you want. We're trying to make it easier to read here. What the Effects panel let's you do though and I think versions since CS2 is it breaks it down. So that you can make just one aspect of this object transparent and leave everything else at solid.

We want to make just a fill opaque. We are going to reduce the opacity of just the fill. So with the Fill attribute selected, drag the opacity slider down. Look it's working. So bring it down something like between 60 and 80% or so. Then you can see some of the beautiful background behind it. But, it's ghosted out, just enough so that it's much easier to read. Than if there were no background at all. And that's how you ghost back the background of a text frame