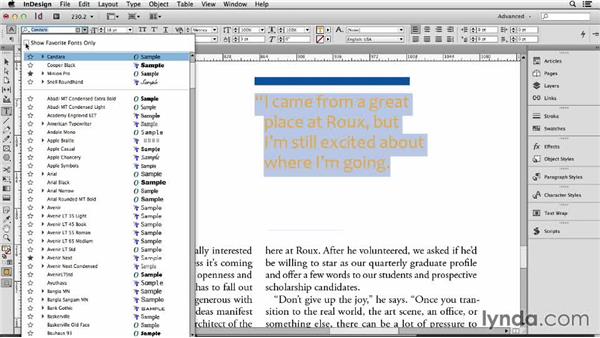 If you're like me, you have thousands of fonts loaded at any one time, whether you're using a font management program or not. Here in InDesign I'm going to click on the drop down menu for the fonts. Look at all these, it's crazy. I want to talk about some new ways in InDesign CC that you can use to quickly locate your fonts. And some of the tips that I'll mention also have to do with earlier versions of InDesign. But one of my favorite things that they've added to CC is this little search field up here. You see this? If you want to search for a font, you can just start typing any letters in the font name.

Now, in earlier versions, you could always type the first few letters, but now, you can type any letters that appear anywhere in there. So if I wanted to search for myriad, if I typed yr, suddenly it jumps right to myriad pro condensed. Another thing is notice that they are also including the styles in this drop down menu. So, if I wanted to search for every bold font that I had, which would be kind of insane, but I could just type bold, and In Design will list all of the bold fonts. I'm not going to do that, but one thing I did use today, in fact, was I was looking for a light condensed font.

So, if you type in, light, that's really nice, a way to see all of your fonts that have a light version of them. And then if you type, condensed, now I just have Abadi, American Typewriter, and Avenir, have light condensed. And by the way, I noticed that you could do it, in reverse too. So if you typed condensed light, it would show you the same ones, so you don't have to worry about which order those go in. Another good feature about InDesign CC is that you have this favorite fonts feature. Now, they haven't quite brought it to what I would like it to be.

Like, right now it's unavailable. If I located a font by using the find command, I can't make it a favorite font, so that's kind of obnoxious. The only time that you can see favorite fonts is if the search field up here is empty. Now you'll see stars next to every single face. And if you like a certain font, you can just click it, and then that becomes one of your favorite fonts. And then if you want to only chose from favorite fonts, you could turn that on. So, let's say, for example, that I am working with this type, and I want to change the font.

And I know I want to change it to one of my favorite fonts, so I'll jump over here, and press the down arrow, and turn on show favorite fonts only. And here are my go-to fonts that I use all the time. I'm like, oh yeah. I like Rockwell. Let's try Rockwell bold. That looks cool. Couple features that I think that you may not realize have been in, InDesign for awhile are recently used fonts and the usage of the font preview. So, the font preview is this word sample over here. It would be really cool if we could change the word sample to something else.

Not quite yet. But we can go to Preferences. I just turned off show favorite fonts. We can see all of these. In Preferences, it will give us control over this group up here. The group at the very top shows your recently used fonts. So, even if you're not on CC yet and you don't have the ability to create favorite fonts, chances are that your recently used fonts are your favorite fonts, right? So just scroll all the way to the top and then that's where you'll see them grouped up here. Right now, they are in alphabetical order. They're not in chronological order and actually the default is to show them in chronological order of the last time that you used them.

If I go to Preferences. And in Mac got to InDesign Preferences. And in PC go to the Edit menu. Go all the way down to Preferences, and go to Type. We have the Settings right here. Under Font Preview Size, set it to be medium. Number of Recent Fonts to Display, I might want to have 30 recent fonts. And then, Sort Recent Font List Alphabetically, which I find more useful than chronological. So, I have it turned on. And now, as I use more fonts, then this top part, remember we have to scroll all the way up to the top to see the recently used fonts, will become more useful to me.

You can also see recently used fonts, by the way, under the Type menu. If you go to the Font menu, these are all your recently used ones. If you're short on space, like if you're working on a little 13-inch Macintosh Air or something like that. You might want to get rid of the sample text, so again just go to Preferences. This time I'm going to use Cmd+k which is a keyboard shortcut to open up Preferences. Ctrl+k on Widows and then go to Type. And simply turn off the Front Preview Sites. Doesn't have to be there. Now, when you go to the menu, takes up much less real estate.

So, there you have it. A whole bunch of ways to choose just the right font that you want, using some of the new features in CC and some the features you probably forgot that were even there in earlier versions of InDesign.