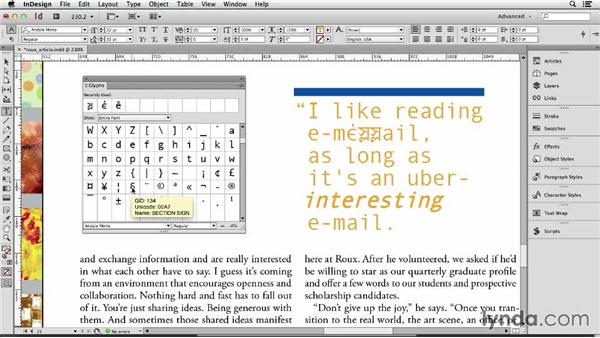 Sometimes you need to enter a character in some text, but you don't know the keyboard shortcut for that, like for example, if I wanted uber to have an umlaut above it, not quite sure how to do that, or if I wanted to make this e upside down, you know, like a schwa character. Not sure how to do that. Well, that's when you want to use the glyphs panel. I want to show a couple tricks that can use with the glyphs panel, and with Unicode input so that you can insert basically any kind of character or glyph into your text.

The glyphs panel exists in two places. In InDesign under the Window menu, if you go down to Type and Tables, you'll see it there. Or also under the Type menu, you'll see here. Same panel. Open up the glyphs panel, and it shows you all of the characters in the active fonts, the one where your type cursor is blinking. And if I wanted to insert a special character, I would just basically have to scroll through here and look for it. There's lots of them. Sometimes you'll be lucky and the drop-down menu will have categories for the different kinds of characters in a font.

So if I'm looking for a specific kind of currency, for example, or a Greek symbol, I could select it here and then insert that Greek symbol and all you do is you just double-click to insert it. So if I wanted this kind of Greek small letter epsilon with tonos, double-click it and it comes in. As you add characters they're saved in the recently used glyphs and this is saved on your hard drive. So tomorrow when I come back to work if I am working on a different project, or a year from now I'm working on a project, and I'd need to insert that glyph again, I can just double-click it from here.

If you're going to use the same kind of hard-to-locate glyphs over and over again, you should save them in a glyph set. And the Glyph set is easily created from the Glyphs panel menu. Go to New Glyphs Set, give it a name. I have ones for currency symbols, ones for dingbats that I'd like to use for bullets and end-of-story markers, ones for a special diacritics that I use when I'm setting foreign language text. We'll just do one called Tough Glyphs. So then when you want to add, one of the Glyphs that you know that you're going to be using again to that set, you just right click on it, and say Add to Glyph Set.

So I'll add that, and maybe I'll add this fun little squiggle. They don't have to be limited to the same font. You can choose a different font from this drop down menu. And say that maybe there's something in Bangla, let's look at this font. That looks like a lot of fun. Let's add this to the tough Glyphs, and this one to the tough Glyphs. And it's adding them as we go. If at any time you want to see your Glyphs set, like let's say you don't have the Glyphs panel open, you just go back to the Glyphs panel, and any Glyphs that you created will be above this top separator line.

So your Recent Glyphs, that's this set up here, or here's Tough Glyphs, these are the ones I've added so far. Okay, so let's go back to this font, Andale Mono, and we'll show the entire font. And do you notice that as I'm covering over some of these little glyphs that we see a tool tip with gid, that's a glyph ID and then also Unicode. Let me hover over an unusual one. Like this right here. Unicode zero zero A seven. The name is section sign. The Unicode is a four digit number, and that gives it it's address in the Unicode lexicon.

And a font would have that Unicode glyph within it. Not every font has every Unicode glyph, but like every font has every lower case and upper case C and D and E and the usual 26 letters of the English alphabet. But there are some fonts that don't have every unusual Unicode. The idea is that, instead of hunting down for a particular kind of glyph here, wouldn't it be nice to able to enter the actual Unicode someplace, so that, that character would be inserted here.

You find out the Unicode. Like this one right here, by hovering over the symbol. So this Unicode is 0115. Now how can I do something, like I can't just press a key, can I, and type 0115, and have that automatically appear here? Why, yes you can. On Macintosh, and I'm pretty sure on Windows. In Windows, you need to go to the Character Map and change the language to Unicode. Now I don't have Windows here, but I'm going to show you how you can do that on a Macintosh. You go to System Preferences.

On Line or Mountain Line it's under Language and Texts. In earlier versions of OS X, look for International. And when you select it go to Input Sources. Turn on keyboard and character viewer so that you get a little menu thing up here, and then look for, in alphabetical order, look for Unicode Hex input. And there it is. It's already checked on because I was using it before. And turn on the U.S. one. You need to have at least two so that you have something to choose from, from this drop down menu.

And close outta here. Now normally when you're working in InDesign, you're working with the regular English language keyboard input. So let's get rid of some of this stuff. And so as I'm typing everything is fine. But if I want to enter a special character, if I know the Unicode for it, like I happen to have memorized the one for the schwa code, that's 0259, I don't even have to have the glyphs panel open I just switch to Unicode Hex input and then I hold down the option key while I type those numbers.

So I'm holding down option and I type 0259, now why did I get that square? That's because this font does not have the schwa. That's what I mentioned before, that not every font has every Unicode character. Here's a cool tip. You can select that, and then just click inside your Fonts menu, and type the down arrow, and just keep going for a while. Oh, there's one. So Arial, that interesting as the schwa character, but the first one didn't. So, whenever you see those kind of things like pink squares, that means it's missing that Unicode character in that font.

And you can usually select it and choose a different font and get that character back. There is a similar way to do this on Windows where you can have Unicode Hex input as well. And that's probably a very uber-geeky kind of tip. But if you need to get any kind of letter or diacritic into your text, and InDesign, you can do so, with the Glyphs panel. Use the Glyphs sets if you're going to be reusing the same kind of Glyphs in different projects. And if you really want to be able to just quickly enter a Glyph by its code, then switch to Unicode Hex Input.

Of course, when you're done entering the code switch back to U.S., and there's a keyboard shortcut that'll jump you back and forth between the two. Use the Glyphs panel, use the Unicode Hex input when you really want to feel geeky. And you'll be able to insert any character you need to, in your text.