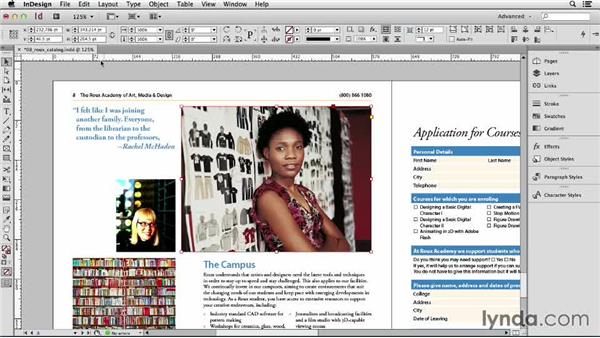 Sometimes when switching from InDesign to another program to edit an image, the image might not come back in is original size before. InDesign is watching for any changes you make and will automatically scale the photo. If you don't want inDesign to scale your images, keeping the same scale size when updating or relinking to images is an easy fix, as demonstrated in this training video.

I have an image here that I want to edit in Photoshop. I just want to crop it down a bit. So, I could go up to the Edit menu and choose Edit Original. But this is a JPG image and I happen to know that it's going to open up in the wrong program. It'll open up on the Mac here in preview instead of Photoshop, and I want to force it to open up in Photoshop. To do that, I'll go to the Edit With pop-up menu, and choose Photoshop. That sends a message to Photoshop to open up this file. Great. Now, I want to crop it down. So I'm going to choose the Cropping tool, and I'll simply crop out the area that I don't want.

And I'll hit Enter, and save it. It's Cmd+S or Ctrl+S on Windows. Then I can close it and go back to InDesign. Well, what happened here? InDesign changed it, it scaled it. Because I used that Edit Width feature, InDesign was watching for a change, and as soon as it noticed it changed, it re-imported it and it scaled it. Here, let me undo, and you can see before, and then redo, Cmd+Shift+Z or Ctrl+Shift+Z to redo, and you can see that it scaled it up. Technically, it scaled it to fit the same size as the original image.

In many, probably most cases, that's just what I'd want, but in this case it's not. I don't want InDesign to scale it, I wanted to keep it the same size. So in this case, I wish that InDesign weren't trying to be so smart and scaled it for me. The good news is, that InDesign let's you choose, should it scale it or should it not. And that choice lives inside the Preferences dialog box. To open the Preferences dialog box on Windows, I would go to the Edit menu. But here on the Mac, I'm going to go to the InDesign menu and choose Preferences.

I'll just choose General and click down here on File Handling. Inside the File Handling pane of the Preferences dialog box, lives at check box called preserve image dimensions when relinking, and that mysterious little thing is the key to telling in design whether you want it to scale those images or not. Right now it's turned on, so it's saying yes, please scale whenever you relink or update. If I turn that off, it will not scale it. So let's go ahead and click OK. And I'm going to undo this, and then I'm going to try it again.

I'll go back to my Links panel and I'll say Update This Link by double clicking on this little Alert button. You'll see that it imported the new version. It updated it, but it did not scale it. It did however move the file over so that the upper left corner of image stayed in the upper left corner of this frame, and that's just the way it is, but I can easily crop this down and move it into position. But the point is it did not scale it, and that's important. Now, if I had Auto-fit turned on here in the Control panel, then it would try and scale it up again.

But as long as that's turned off and that preference is turned off, InDesign will leave the scaling alone. So, this looks good, but now I'm going to go back to Preferences. I'll go there with a keyboard shortcut: Cmd+K or Ctrl+K on Windows, then I'll click on File Handling. And I'm going to turn this check box on, because like I said, most of the time, I do want InDesign to scale it just like it normally does. So, I'll leave that turned on. But next time I don't want it to scale, I'll know just where to go.

Video: 140 Keeping the same scale size when updating or relinking to images