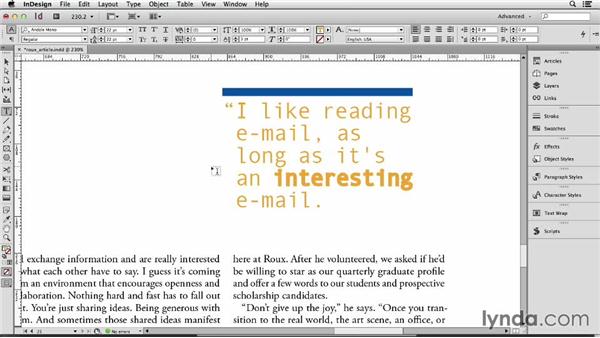 It may come as a surprise to some, but as designers continue working on their projects they realize that not all font families have bold or italic options. Luckily, InDesign allows you to "cheat" by faking bold and italics. This tutorial will show you how faking bold and italic when the font family doesn't have one will still give you the look that you want without the frustration of having to find another perfect font.

Sometimes, to get the effect that you want in InDesign, you have to cheat it a little bit. Let me show you a couple of my favorite cheats having to do with making fake bolds and fake italics. You might be coming from a background of fake bolds and fake italics are going to print horribly, they are going to be all pixelated, they're going to look stupid. While they won't be pixelated, they might look stupid, but they won't be pixelated. Because all we're doing is we are doing some transforms or some strokes to postscript paths, just like any shape, that's what we're going to be doing with our type.

Let's say, for example, that in this pull quote here, I like reading e-mail. As long as it's an interesting e-mail. Well, you heard how I put some emphasis on interesting, so I'd like to make this word interesting italic. So I double-click the word, go to my font menu, and no italic. So, this might happen, or often happens to me when you're working with dingbats. You want to make an italic dingbat for some reason, usually they don't have italic or bold or bold italic. So, how do you fake an italic? This is probably the easiest one to do, select the word and then, up here in the control panel, if you are in character mode, if you see the font then you are in character mode, you'll see a skew.

Look they even added false italic here. I think that's new in the tool tip. Interesting. So with it selected, you can go ahead and type in some sort of angle here and now it's fully endorsed here by Adobe, I guess. I'm going to type in, usually 15 degrees or 20 degree would work. If you press Shift+Enter or Shift+Return rather than Return, you can keep the field in focus. So, you can try different settings, so that's 20, so if I type 15 Shift+Enter, that's a little less, that looks pretty good, I like that.

There we go, some fake italic where there was no italic before. Let's make this back to zero and say that we want it to be bold, of course, you can combine italic and bold, if you wanted to. To make something bold usually involves fattening up the type, which means you have to add a stroke to it. Now, depending on the font, sometimes, you can get away with simply adding a stroke right from the swatches panel. Or, of course, it's also available up here in the control panel. So, here, let's just do it right from here. So, there's usually no stroke on type.

That way you have the ability to apply a stroke, but add a stroke of your own choosing. However wide you want that stroke to be. To convert type to outline select it and then go to the Type menu and choose Create Outlines. That changes it from editable type into a filled shape, and you can see the filled shape if you select it with the Direct Selection tool, see? But it looks exactly the same, and it'll print exactly the same. They have grouped all of those shapes and then pasted it in.

I'm going to quick write on it with the Selection tool as an anchored object. Now we can go ahead and apply a stroke to everything inside this anchored object. So, I'm going to come here and say, I want to apply a stroke. And now we have this field lights up where I can actually change the stroke weight. And even that looks really good, doesn't it, at one point stroke? Doesn't look bad, but let's say that I wanted it a little bit thinner. Let's try 0.5 stroke, nice. Now, let's say that I also wanted to also make this italic, how would you make it italic? Well, you could've started out by making it italic with the Skew command and then converting it to outlines, but you can also skew this, well now it's called Shearing, when you shear an object.

We're going to shear this. You can shear something with the Shear tool. I bet you didn't know there's a shear tool. Yes, there it is. You could also do it with the Free Transform tool. If you start dragging with the Free Transform tool, and then hold down the Cmd on the Mac or the Ctrl on PC as you drag. But it's a little hard to control. You see what's happening here? If you hold down the Shift key, then you get this kind of crazy effects. So, I'm just going to undo all that and instead go back, select this guy with the Selection tool. And let's do it numerically from the Object menu.

Go to Object>Transform and choose Shear. And now we can go ahead and say we want to Shear it on the horizontal axis. Make sure that preview's turned on. And let's try 15 degrees again. That looks good. So now we have a bold italic. Pretty good, fake bold and italic, if I say so myself. It's not quite as convenient as having a bold, italic and a bold italic versions of the typeface, but there are so many faces out there that don't have those, it's really great to know how to do a fake bold and italic when the situation calls for it.

Video: 139 Faking bold and italic when the font family doesn’t have one