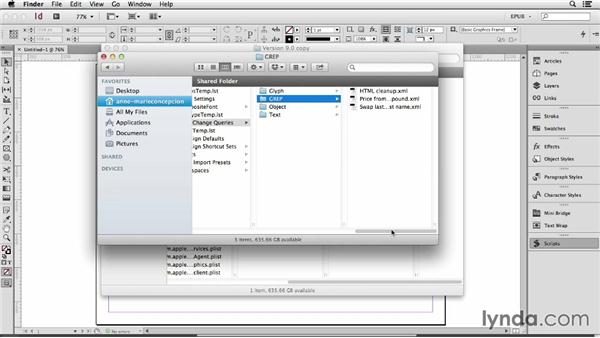 Sharing saves a project time, cost and resources. However, enabling sharing with your team demands customized settings for workspaces, shortcuts, and more. There are several ways you can do this in InDesign, such as saving files as individual XML files, saving as defaults and using Sync Setting options. Learn efficient techniques for sharing presets, workspaces, and custom shortcuts sets in this video tutorial.

If you've been using InDesign for any appreciable amount of time, then you have probably created some custom settings for yourself. Settings that you would like to, say, transfer to a second computer that you're using, like a laptop. Or maybe you want to share with other people in your workgroup, put it on the server for other people to use. Like custom workspaces or saved find change queries and so on. I'm going to show you how to do that in this video. By the way, let me mention that if you're using InDesign CC, at some point, we don't have it yet in this computer, but at some point they're going to add a feature called Sync Settings.

It'll appear under the File menu or the InDesign menu That will allow you to sync your settings to the cloud, and then you can sync them to another computer that you have associated with that account. I don't know if that's going to allow you to share settings, and besides which, if you have any version of InDesign earlier than CC, you're never going to get that. So this method will work with any version of Adobe InDesign as a way to share your settings and to also back them up in case of disaster. There's two main kinds of settings. One kind of setting is saved as individual XML files on your hard drive.

These are actual files that you can take and zip up and put on a zip drive or something. And the other kind of settings are saved in this big mess called InDesign Defaults that will get wiped out if you ever need to rebuild your preferences, which is a very common troubleshooting technique. Let's talk about how you can back up or share both of these kinds of settings. For the kind that are saved as XML files those would be things like custom workspaces that you've created, scripts that you've installed in your user folder.

If you've done any fine changes and you've saved fine changes like, remove old refs or make a company name bold or, I did one here called swap last name and fist name as a change. These things are all saved on your hard drive. The fastest way to get to them, here's a cool tip, is you don't have to start digging through your hard drive looking for your user settings folder. Just open up your scripts folder, even if you've never installed a script. Find where it says user, right click, and choose reveal. On the Mac, it'll say, reveal in finder.

And a Windows machine will say, reveal in Windows. It's going to jump to the finder, to your OS. And it's going to select that. And if you back up a little bit, you'll see that here is the folder with all of your settings. In fact, here is the path, let me right-click here. So, on my Macintosh, inside my Home folder, inside the Library folder, Preferences, blah de blah de blah de blah. So look here, where it says the language, and here we have saved find change queries, saved work spaces. If you've created a custom keyboard shortcut set.

All this stuff is saved here as little files, that you can share with somebody else. And they can take your files, and put them in the same folder on their hard drive. Just copy and paste, just like any other file. What I like to do is just duplicate this entire folder, so this Version 9 is the current CC version of InDesign, you'll see a folder for every version you've ever installed on your hard drive, and I've duplicated my Version 9 folder right here. And this thing I could just compress, and put onto some other media or upload to the cloud so that it's always at the ready.

Or I can email to somebody and they can extract those work spaces, and saved fine change queries, and so on, and put them in the same folder on their hard drive. So that's how you deal with those xml file things. And the other ones all have to do with presets. In your InDesign File menu, go down here and look under adobe PDF presets, if you have any entries down here that don't have brackets around them, these are your custom PDF presets. So I have ones for different printers that I'm working with for different projects. You might also have presets for documents in the New Document dialog box there's a drop-down menu for document presets, so you don't have to keep entering all the settings for these kind of documents.

And you might also have print presets when you're in the Print dialog box of printing different kinds of outputs that have different combinations of the printer and the paper and the so on. These things will be wiped out completely should you ever need to rebuild your preferences. And they do not exist as separate files that you can grab onto. Instead, the only way to back these up is to go to the define dialog box. Each one of these has a define dialog box, and then select all of your custom settings, so I am clicking on one, and then shift clicking on the last one.

Choose Save, and save them somewhere on your hard drive. So here you can see that I've already saved AM's document presets. Do that for each one of those kinds of presets, and then, should somebody else want to use your presets, or should you ever need to re-install them, let me delete these to show you what you do. You would just go to your documents presets defined dialogue box again, this is what it would look like. And choose load rather than save. Grab onto those presets, click open and they all come back. Or give those presets to somebody else and they can load them and they'll get added onto their document presets already.

So that's how you share these kind of presets and these kind of workspaces and find change queries and so on. All of your custom settings that you've done in InDesign, how to share them with each other and how to back them up for yourself.