134 Adding effects to your rule above and rule below 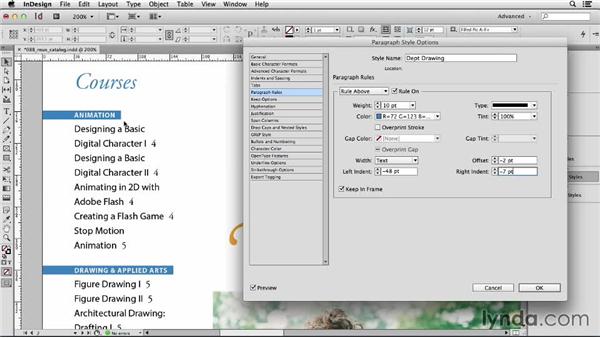 By adding effects to your rule above and rule below, you can make a reversed out text background more attention-grabbing. These effects can be added in InDesign by making a new style or using an existing one. In this online training video you'll learn how to tweak these paragraph-style settings for interesting effects.

This headline demonstrates one of the most common effects that people want to make in InDesign, a headline where the text is reversed out of a dark background. I showed how to do this in my InDesign Essential Training title here in the online training library, but I want to show you a few tricks to make it look even cooler. Now, of course, because I've applied this to several different paragraphs, I made a paragraph style. And the paragraph style is called Department Drawing. So I'm going to right-click on that and click on Edit Department Drawing. This way, by editing the paragraph style options, I change it everywhere in my document.

I'll click on the Paragraph Rules pane inside this dialog box. And you can see that all of these are set up with the rule above. It's a very thick rule above, 10 points with a minus 2 offset that sets it down a little bit from the baseline. And it's set to a nice dark solid color. Now, let's start tweaking these settings to make it a little bit more interesting. Let's start by changing the left indent settings. By increasing the left indent, it actually moves the rule to the right. That's not very interesting. I want to move it to the left. So instead of positive values, I want negative values.

I can just move this back or just type in what I want. For example, minus 1p. I'll hit Tab, and you'll see that it moves to the next field, and the rule actually moved to the left one pica. We can make this even bigger by saying minus 4p, and then I'll Tab. It's actually bleeding off the side of the page. Now let's change the right side. Before I change the right indent, I'm going to change the width of this to text. That way, it will only cover the text itself. But we do want to a little bit beyond the text, so we'll change the right indent.

Once again, setting it to a negative value. That way, it will extend passed the end of the word. How can I put a rounded cap on the end of that rule instead of a sharp edge with corners? I want a nice rounded cap. To do that, all I need to do is change the type from a solid to a dotted. Either of the dotted values will work. Now, it doesn't look like it's going to work quite yet because it gives me a bunch of dots. But here's the trick, change the gap color. The color of the space between those dots. And I'm going to chose the same color as I have up here.

I happen to know it's this one right there. If the stroke color and the gap color are the same, you won't notice the pattern. It just looks like a solid line with a rounded cap. There are some other fun things we can do with rules as well. Let's set this back to solid and make this even thicker. How about 20 points instead of just 10? I'll set the offset down a little bit, just to move it down just slightly below the baseline. And I'm not going to turn on a rule below. So in this little pop-up menu, I'll choose Rule Below and then click Rule On. Here you see I have a one point white rule.

It's white because it's the same color as the text itself. That's set up here in the color pop-up menu. I'm going to make sure it stays white no matter what the text color is by setting this color to Paper. Then I'll make this even thicker, let's say 7 or 8 points. And I'll change the offset to a negative value to move it up. I'm just hitting the down arrow on my keyboard to move this in one-point increments. You can already see that by adding the rule below to the rule above, you can get different shapes. This is kind of a stair steppe shape. Let's go ahead and change this left indent to minus 4 picas, so it knocks all the way out, and then change this type to a dotted line.

Well, let's say Japanese dots. Let's change the offset here, move it a little bit higher. And now, you can see that you are getting a very a different effect where the rule below is knocking out the rule above. If you change the type, you change the effect. So, let's try the right slant hash and see what that looks like. Yeah, this is really starting to look fun. Try it yourself. See what kind of cool affects you can come up with in your documents.

Video: 134 Adding effects to your rule above and rule below