133 Creating nav points in a movie 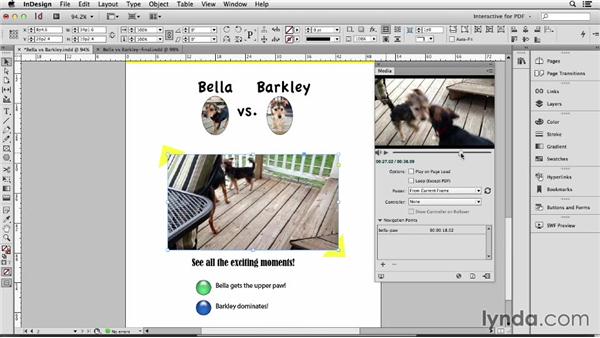 When showing interactive videos, you may want to draw the viewer's attention to specific points in it. It can get awkward if you have to rewind the video, get to the specific time code and start again. You can do this much more efficiently in InDesign by creating nav points in a movie. This online video teaches you how to create buttons or nav points to easily jump viewers to the desired time code.

When you're showing a video in an interactive document, like an interactive SWF or PDF, often you want to point people's attention to specific points in the video. Like, if you had an illustration or a chart, you might want to drag out call outs, right? With a little line saying, look at this part and look at this part. Well, it's kind of awkward in a video to say, go to time code oh, two, nine, three and take a look at xyz. Instead what you can do is create buttons that jump people to those time codes. Those are called nav points and you can do this in Indesign.

Let's look at the final effect here and then we'll see how we built this in InDesign. This is a video that I took of my two new dogs that I just rescued, of them play fighting on the deck. What I want to show you is Bella, that's Bella, coon hound, where she gets the upper paw. And Barkley, that's the little terrier mix, Barkley dominates. And if I just play the video. It takes a while to get to those points. So I'm going to stop, rewind, and this time I can just say, let's jump to where Bella gets the upper paw. There we go. And now, let's jump to when Barkley dominates.

Boom, there he is. Course I'm doing a silly little example, here. But if you're doing a video that has chapters or sections, you'd might want to create little buttons or icons that will help people jump to those specific chapters or sections in a single video. So how was this done? Let's jump back into InDesign. I placed the video, as usual. You just choose File, Place. Place it right in here. And then, in the media panel, it shows a preview of the video. And I chose a poster image from the current frame. And then what you need to do is you need to create nav points.

And you do that right here, so you scrub through the video until you get to the point where you want people to jump to. So I'm going through here looking for the part where Bella's paw is on top of Barkley. And it's com, there it is, that's, that's close enough. And then when you get there, let me detach this from here, in the Navigation Points area, you click plus. And it adds a point there, and I'll just call this Bella paw because we're going to refer to this in a bit. And you can continue adding nav points that way, let me scrub forward, and see if I can find the part where Barkley's on top, that's close enough right there.

And I'll just click the plus symbol, and call it Barkley. And then for controller, you know, while you're here, you want to put some sort of controller so people can play and pause and rewind the video. I'm just going to choose skin over all, which is the one I have in the PDF example. So we have our nav points, now we just need a way for people to get to those nav points, and we do that with buttons. Now I just drag these buttons right out of the button library, if you change to the workspace for interactive for PDF you can grab those. If you dragged and dropped them, and they're already ready to go with rollover states, then you select one of these buttons and you open up the Buttons and Forms panel.

Every button from that library has a default action that's go to page. And we don't want this to go to any page. So we're going to delete that action. That's for sure, and instead we're going to add the action that has to do with video. Now if you look through here for one that says go to nav point, you're not going to find one. Look for just the word Video. Then after you get to Video, you can see down here under Options what you can do. So you can have a button that plays, one that stops, one that resumes. But we want to play from a navigation point. So choose that as the option and then choose one of the navigation points you selected.

See, pretty simple. Let's do the same thing for Barkley dominates. Don't forget to delete this action. If you forget, you're going to get an error in the pdf. It's going to say, sorry there is no such page. So I'll delete that. And when I add the action video. Go to nav point. This one would be Barkley. And that's about it, that's all you've got to do. So here's the final result. That looks just about the same. Everything has been set up. Then you export to pdf. Of course you want to export to interactive pdf. I just command or control e, which is export. You want to choose Adobe PDF Interactive.

Let's put this on the desktop. And I'll say two. And it's only a one page document, but just to be safe I always say pages. And usually all of the defaults are fine. You click okay. And it opens up in Acrobat. I'll put fit in window, lets give it a go. I'll click the green button for we want to jump to where Bella get's the upper paw. There we go. And then jump to where Barkley dominates. That's it. Very easy to create navigation points and then export them to an interactive PDF or SWF file.