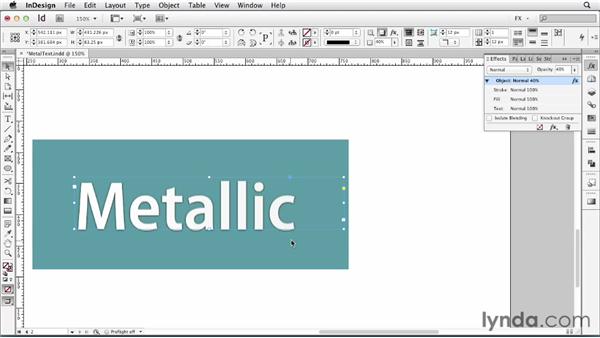 Hi. I'm Mike ranking and welcome to InDesign effects. In this week's effect, we'll see how to create type with a metallic finish using several stacked copies of the text. Sometimes you can achieve a great look in InDesign by adding several transparency effects to the same object, but other times it might be easier to just work with several copies of an object, where each one contributes something to the overall look. And that's what we have here with this metallic type. It's actually made up of a stack of five text frames, each with just the word metallic in them and they all have something different about them, a different blending mode or different fill or different presition that contributes to the overall effect.

So, let's try making this. We'll go to the next page in the document, we'll have just a single text frame. I'll slide it over, open the effects dialogue box, and you can see I've added a little drop shadow here, with a distance of zero and a size of three pixels. And in the swatches panel, I can see that it's filled with a little metallic gradient. Just goes from a white to a light grey color. All right. So let's star building up an effect here. I'll copy this text frame and past it in place. I'll target the text and I'll change the fill from my gradient to paper.

I'll select formatting effects container. Go up to the effects panel, and reduce the opacity a bit. I'll take it down to 40%, and this is going to lighten the feel of that base object. Now I'm going to copy and paste in place. Now I have three objects. And this one I want to nudge up a little with my arrow key, so I'll just tap the up arrow key on my keyboard once, move it up. Now, the point of this one is to create a little edge down here, so I'm revealing that light copy of the text and creating sort of an alternative to the bevel and emboss effect. Now for this one, I want the Normal blending mode and opacity set to 100%.

And I'm going to go back to my gradient fill. So I'll switch from paper to metal gradient and I'll visit the gradient panel and set the angle to negative 90 degrees. Here we go. Copy and Paste and place again. And this time I want to add some more contrast. So in the Effects panel, I'll change the blending mode from Normal to Multiply, at 100% opacity. And then one more copy and paste in place. And I want to add a little bit of a bluish hue here. So I'll go to my Swatches panel, target the text, change the fill to RGB cyan, select formatting effects container, go back to effects, and I'll reduce the opacity.

I'll hold down the shift key on my keyboard and tap the down arrow key to reduce the opacity of that cyan until I get the look that I want. I just want this cool metallic finish, 10 maybe 20%. So in this video we saw how to make metallic type using a stack of several objects instead of applying a series of effects to a single object. There are two benefits to working this way. One, you can easily tweak the effect by altering or removing one of the objects. And two, each object is independent, so if you want to experiment and see how different fills or strokes or effects work together, just keep adding to the stack.

But one bit of advice, if you start making a large stack, visit the layers panel and give the items descriptive names, so you don't get confused about what's what. I'm Mike Rankin. I'll be back in two weeks. Thanks for watching.