095 Revolving an item around an object 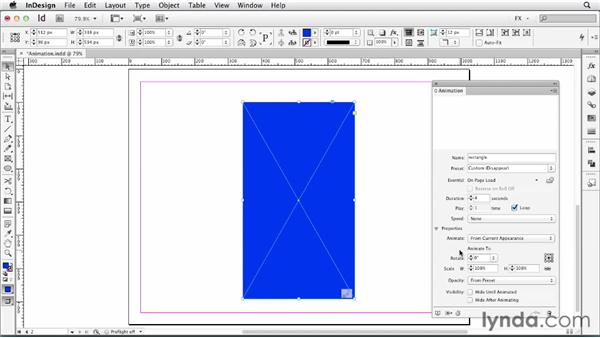 Hi. I'm Mike Rankin, and welcome to InDesign effects. In this week's effect, we'll see how to pull off a trick with Indesign's animation tools to make it look like an object is revolving around another. Let's preview it so you can see what I mean. See how the red circle seems like it's going in front of, and then behind a black rectangle? Well, this isn't really possible with InDesign's animation tools. You can't use them to change the stacking order of objects. But what we can do is use a trick incorporating a third object, and some very careful timing to fake this change in the stacking order. So, let's see how it's done.

I'll hide the swift preview panel and I'll go to the next page in my document. And here I have just a plain black rectangle, and I have that red circle that's been animated. And you can see the motion path here that it goes back and forth and it loops this animation. So, what I want to do is select the rectangle, copy it, paste it in place by pressing Cmd+Shift+Opt+B or ctrl+Shift+Alt+B. And I'm going to change the fill color, just temporarily, to help you see what's go in on here. So, I'll just change it to blue for now. Now I'll open my animation panel by choosing window interactive animation.

And from the presets, I'll choose disappear. I'll leave on-page load as the event. For the duration, I'm going to change it to four seconds. I'm going to set it to Loop. I want a speed of none. And in the properties, I'll leave From Current Appearance selected and all these other defaults except the bottom two, I want to select both, Hide Until Animated and Hide After Animating. Now before I preview this animation, I want to set something in the timing panel, so I'll click on the little stop watch down here. I can see my two events, the oval going back and forth, and now the rectangle disappearing, but they're going to play one after the other.

So I want to select them both and click the little chain so they play together, but I want the rectangle animation to start a little bit after the oval. So I'm going to set a delay of half a second. I'll hide the timing panel and now I'm ready to preview. So now because I changed the fill color to ,blue you can see what's happening. It's sitting on top of everything else, and it appears only when I want it to seem like the red ball is going behind the rectangle. I'll hide the preview panel. Let's change the fill from blue to black and preview again. And there, because the fill color is the same as the object in back, you can't really tell that it's appearing and disappearing and we've created our illusion of the ball going around the rectangle.

In the video, we saw a way to overcome the fact that you can't use InDesign's animation tools to change the stacking order of objects. We were able to make it look like one object was moving in front of and then behind another object by adding a third object and carefully timing its appearance and disappearance. It's a sneaky trick, but it work. I'm Mike Rankin. I'll be back in two weeks. Thanks for watching.

Video: 095 Revolving an item around an object