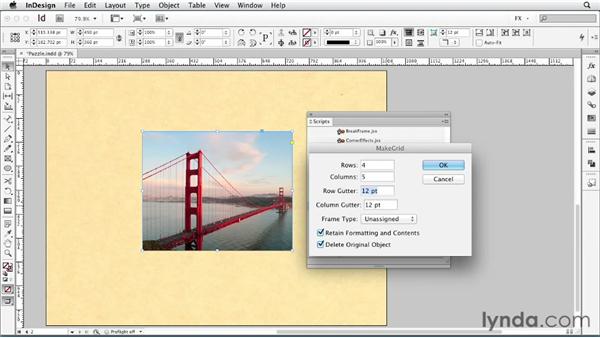 Join Mike Rankin for an in-depth discussion in this video 083 Building a puzzle, part of InDesign FX.

Hi, I'm Mike Rankin, and welcome to InDesign FX. In this week's effect, we'll see how to break an image into several pieces that fit together like a puzzle. For this, we'll use a handy script that comes with InDesign called Make Grid. It does all the hard work of dividing up the image into as many frames as we want. Then once we have the grid of images, we can rearrange them and apply effects. Let's see how it works. So here we have the goal what we're looking for, this picture of the Golden Gate Bridge, and it's been broken into several different frames, each of which is independent, I can move them around, I can rotate them and so forth. So let's do this.

We'll go to the next page where I have that same placed photo, but in a single frame, I'll slide it over here and I'll choose Window > Utilities > Scripts and in my Scripts Panel, inside the Application folder there is a Samples folder and then inside the JavaScript folder, I'm looking for the script called MakeGrid, there it is. So with this frame selected, I'll double- click to run the script and then I just need to tell it how many rows and columns I want, so in this case I want four rows and five columns.

I don't want any space in between the different pieces. So I'll set the Row Gutter to 0 and same for the Column Gutter, and I can leave the rest of these settings as they are and click OK. Now it doesn't look like very much has happened, but as soon as I click and drag on the image, I can see that it's been broken into all separate pieces. I'll just undo to put those back where they were and now I can start applying some effects. So I'll click and drag over the whole thing, I'll hold down Option or Alt and click on the Drop Shadow settings in the Control panel, and I'll give them a small drop shadow.

I'll set the Distance to 0 and maybe decrease the Size just a little bit, down to say 4 pixels, I'll click OK and deselect. Now I can just drag these around, rearrange them, I'll pull one off and rotate a little bit, we'll slide one over to the side, I can change the stacking order as well. If I want to, I could send this to the back and move the other pieces in front of it. I can stack a couple over here and decide I want this one on top and so forth. In this video, we saw how to create a puzzle image by using the MakeGrid script to slice up one picture into many equal-sized pieces and then we are free to rearrange those pieces and apply effects to them.

I'm Mike Rankin, I'll be back in two weeks, thanks for watching.