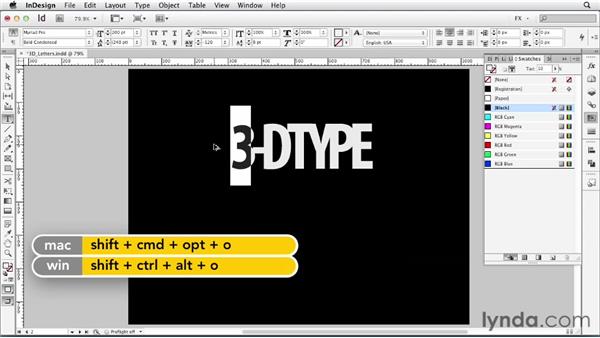 Hi! I'm Mike Rankin and welcome to InDesign FX. In this week's effect, we'll take a look at how to add more depth and dimension to lettering. Drop Shadows are one of the key tools to giving objects a 3D effect, but you can't apply a drop shadow or any effect for that matter to a selection of text. The same drop shadow is applied to all the text in a frame. This means that you can't make letters seem like they're stacked on top of one another. But by converting text to outlines, we can get around this limitation and into a greater variety of 3D text effects, like the one that you see here.

So let's try this. I'll create a new page in my document, I'll press the F key on my keyboard to get my Rectangle Frame tool, and right now I just want to create a background object. So I'm going to drag over the entire page, and up in the Control panel, I'll give it a Fill of black, switch my Selection tool and I'll lock this object, so it doesn't get in my way. Now I'll switch to my Type tool, click and drag out, and I'm going to create some text just saying 3D Type. I'll select it, change the font to Myriad Pro, Bold Condensed. I'll make it really large, 200 points, and I'm going to change the Fill of the text to 10% Black, move it over my background, and I'll center it.

Now since I want these letters to overlap a little bit, there's another thing I want to do, and that's to track back all this text. So I'll select it all and track it back. In fact, a little bit more, just so they are going to overlap and that looks good. Now I need to convert all these to outlines, and I'm going to do them one at a time. So I'll double-click, switch to my Type tool, I'll select the first character, this 3, and then I'm going to press down Command+Shift+Option+O or Ctrl+Shift+Alt+O on the PC to convert this one character to outlines, and also copy it at the same time.

So the original live text of the number 3 is still intact, but I have an outline copy of it. So Command+Shift+Option or Ctrl+ Shift+Alt+O and there is my 3. Now I'm going to go do the same thing for each of the rest of the characters. Now I have all my copies. I can discard or just move out of the way the original text. And now these are all independent frames that I can apply any effect I want to, including a drop shadow. So I'll select them all, I'll Option+Click or Alt+Click on the Drop Shadow button to bring up the Effects dialog box, and I'll change the settings a little bit.

I'll leave the blending settings the same and the Distance setting the same, but I'm going to change the Angle to a 180 degrees. This makes the light shine from the left and cast the shadows towards the right. I'll click OK and deselect, so we can see the effect. That's pretty nice. Now what if I wanted the shadows to be cast in the other direction? Well, I can select all the frames again. Option+Click or Alt+Click on the Drop Shadow button in the Control panel, and I'll change the Angle to 0. Now I can't see the shadows right now and that's because the stacking order has to be changed. So I have to select each of these objects, and then bring them to the front, so they cast a shadow to that character to the left.

So I'll press Command+Shift or Ctrl+Shift on the PC plus the right bracket to bring each of these to the front. And there you have it, 3D type. In this video, we saw how to overcome the limitation of only being able to apply a single drop shadow to all the text in the frame. We converted each letter to outlines, and in doing so, we made each letter its own frame, with its own individual drop shadow, which made for some cool looking 3D type. I'm Mike Rankin and I'll be back in two weeks with another new InDesign effect. Thanks for watching!