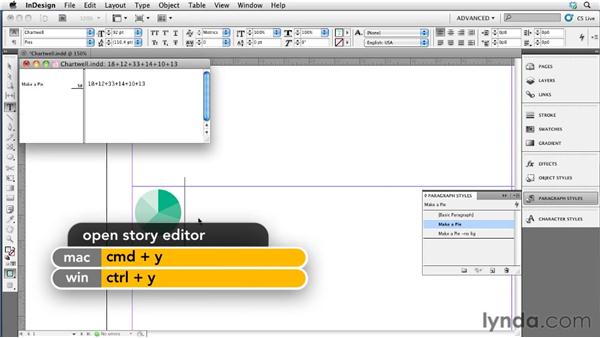 Sometimes projects and reports require charts that need to show relevant data. Unfortunately for InDesign users, there isn't a chart function that can quickly whip those up. But there is a workaround with a certain font that will help you get that pie chart ready for a big meeting. This lesson will show you how magically building graphs with the Chartwell font will help you provide the perfect chart to fit your client's needs.

Anne-Marie Concepcion > Do you ever wish that InDesign had a little charting function? You know something kind of like Illustrator but simpler, where you can easily whip up bar charts or a pie or something like that? So here's a workaround for that. So I'm not going to show you a hidden charting function in InDesign, though I would love to. Instead, I'm going to show you a way that you can use a typeface to create charts. The typeface is called Chartwell and it's really cool how you can use it. So let me show you. I've created a text frame in InDesign and let's say that my client has given me the statistics that they want a pie chart and they want to show 30% did X, 45% did Y, and 25% did Z. Right, that adds up to 100.

So all you need to do is you type out those numbers, the actual numbers, no spaces, use a plus symbol in between each one, and then turn on Ligatures, which should be on by default. But I've turned them off in the meantime while I was playing around with this. So Ligatures should be on. Then as soon as you change the typeface for these numbers to Chartwell, watch what happens. So I'll come up here and choose Chartwell and I'll make sure to choose the pie.

Big deal, you know, so it's a circle. Let's undo and instead before we do that let's change the color. So Swatches. We'll make the color of 25 red and the color of 45 green and the color of 30 we'll make it this pretty orange. Let's try that again. Select these, make sure Ligatures is turned on, and change it to Chartwell, Pies. There you have it. So you can actually make this larger. It's actual characters, but it has actually made a pie chart.

Now what if the client says, you know what I got the numbers wrong. Or I need to add another section to that pie chart. Well, you just have to adjust the numbers. Now you can do that in one of two ways. Now you could select this pie chart, and then turn off Ligatures, and there are our numbers and you can edit them that way. Or because we have this wonderful thing called the Story Editor in InDesign, you can just go to the Story Editor for that story that contains the Chartwell numbers. Edit > Edit in Story Editor. Or remember you don't see formatting in Story Editor.

So here, we can say, instead of 25, we want to be 15 plus 10. And we're going to color the 10 blue. There you go. Now if you wanted to manipulate this chart, like you want to make it 3D or something like that, you going to have to convert the font to outlines and then you can take the pieces apart. They'll all come through as anchored graphics. But just in itself being able to quickly whip together a pie chart is so fun! Let me show you an example of the ways you can speed that up.

Down here in this text frame I have the numbers already set up. And they're colored because in the Paragraph Style panel, I created a paragraph style called Make a Pie. Now to show you the numbers I duplicated it and turned off Ligatures. But let me show you how it's set up. I created nested styles so that the first number gets colored 100% of the color I called pie green and that character style gets applied through the first plus symbol.

So I've created character styles for each one of these colors and then in the paragraph style called Make a Pie I used nested styles to automatically step through all those colors. So for example if I took out this one then all the other colors increment. If I say, oh that should be, let's put that back at 33. Now let's turn on Ligatures so just choose Make a Pie. This one has Ligatures turned on. And there's my pie chart. Another cool thing you can do with Chartwell Pies-- See there's three variations of Chartwell, Bars, Lines, and Pies.

We'll look at Bars and Lines in a second. If for a pie chart only, you can add a letter at the end, which will put a hole in the middle of this, turning this into a ring chart as opposed to a pie chart. If I said +a, it makes a little tiny circle. Hard to see. I'm going to color that a black. And 30. Nah, we don't want 35% of black. We want it 100% of black. So let me go back here.

Or let's actually jump to M. It makes it a little larger. Or if you said capital A, it makes it even larger, all the way capital Z. So from little A to capital Z, smaller and larger circles. Let's actually change the color here to Paper for that capital A. And now we have a little ring chart. Pretty neat, huh? And again if the client says, oh you know one of these numbers is different, then all you need to do is go to the -- you don't even need to select it. Just go to the Story Editor and change the numbers up here.

It's something I've never seen before, but it works really well. You know, this font will not work now in some programs like Microsoft Word. It can't figure out what you are supposed to do. But in InDesign, Illustrator, and Photoshop, it works great. Remember, it's always the Ligatures that turn it from the existing numbers with plus symbols into the actual chart. So here, I have some numbers written out. And I've assigned the font style Bars to a Chartwell's Bars. But Ligatures is turned off. So you can see the numbers.

I'll come over here and turn on Ligatures. And that is what the bar chart looks like. So let's undo. 50, 130, 450, 200, and Ligatures, there it is. Now if you want, I'm going to go up to Story Editor, you can put little cap on the end by ending it with the equal symbol. And then I'm going to close this equal symbol so you can see it a little better. We'll color that black as well. So, you don't have to use a stacked bar chart like I've done here. What you could do would be to create on one line say 50, the next line say 130, the next line say 450, select them all, and turn them into bars.

Like let's go ahead and do that. I'm just getting rid of the plus symbols and turning them into separate paragraphs. So then you can have a legend on the left showing the different amounts of things and then on the end of each one of these, you can add a little cap, you know you'd color it black. Actually, I should just copy and paste this one right. It's already colored black, I'll just paste it there, and there and there, and make a nice little bar chart for yourself. And just change the leading to change the spacing of the bars. Very flexible in that way. The last one that we have down here is called Chartwell Lines.

So let's take a look. This one I've already turned on Ligatures and I'll open up Story Editor. Lines should be called area chart. It's an area chart. It fills in according to the numbers. You can have as long of a string of numbers as you want and then you just add plus symbols after that. So it starts out 25, 5, 100, 45, and so on. If you want to adjust something, like let's say it's not a hundred. It's more like 95, I'll select the number 100, replace with 95, and it reduces a little bit. So though I'm not able to show you a charting function in InDesign, al you need to do is get yourself the Chartwell font and you can have all sorts of fun playing with Ligatures turned on and off to make all sorts of fun charts.

Now I've queued up to the designer's website here. It's TKType.com, and he's designed a couple typefaces. Otari's just a regular typeface. I thought it was another really neat one like this. But this Chartwell is just amazing. I mean he's got instructions here. They're $20 per font for bars, pies, and lines, or buy all three for $50. So check it out. It's a fun way to make charts with a font in InDesign.