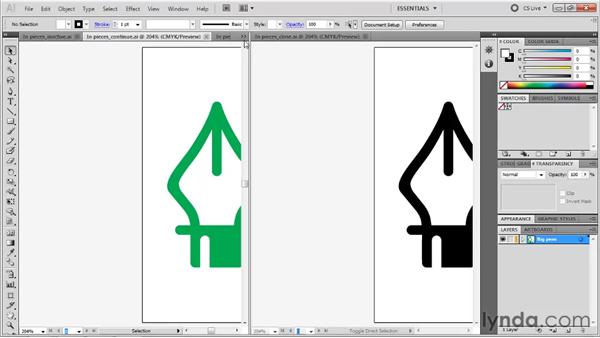 In this exercise, I'm going to show you how to work inside the Tabbed Window Interface, in which each and every open document appears as a tab at the top of the screen. Now to a get a sense of how this interface behaves you need to have multiple illustrations open. So here's what I did I took the Welcome again.ai file and I'll press Ctrl+Alt+0 or Command+Option+0 on the Mac to zoom Out. So that we can see all of its Artboards and I went ahead and exported the first five Artboards because we didn't need the sixth one, the one that includes all the others, the first five Artboards, I saved as independent documents.

And here's how I did it. I went up to the File menu and I chose the Save As Command or you can press Ctrl+Shift+s or Command+Shift+s on a Mac and I went ahead and called this document In pieces.ai, like so and you can see the various In pieces documents that I've saved inside of the 02_workspace folder. I will go ahead and click on the Save button and it inside the Illustrator options dialog box, I actually decided to go with an older version of the format, I sometimes do this to make sure my files are as accessible as they can be, but if I were to save this file as an Illustrator CS file the way it is with these many Artboards then what Illustrator will do quite wisely I think since Illustrator CS did not support multiple Artboards is it will draw guidelines around where these Artboards used to be.

So at least if you make this bonehead maneuver and you didn't mean to this in this and this is your only version of the file, you can come back in and re-draw your Artboards around the guidelines. So it's pretty smart but anyway here's what I want to do I'm going to Save each Artboard to a separate File and I just want the first five. So I'll change my range value here to 1-5 and then I'll click OK and then what Illustrator does I am not going to do it right here in front of you because the work is already done. Illustrator goes ahead and calls each one of these illustrations In pieces_ whatever the Artboards name was, and you may recall that we not only had the In pieces_welcome.ai Artboard but we had an In pieces_inactive.ai and In pieces_continue.ai, In pieces_join.ai and In pieces_close.ai named after the various Pen tool cursors.

Now I can switch between them by clicking on any one of these tabs which I figure is pretty self-evident. You can also switch between the various open illustrations by pressing Ctrl+Tab here on a PC or Command+Tilde on the Mac and the Tilde key by the way is that wavy character to the left of the 1 key just above Tab on an American keyboard. Now you maybe wonder why this big difference between a PC Ctrl+Tab and a Mac Command+Tilde. Well it's an OS level thing so it's the difference between Windows and the Mac fundamentally.

Notice that I cycled around once I got to the last illustration I cycle back to the first one and so on. If you want to move backward through the list you press Ctrl+Shift+Tab like so or Command+Shift+Tilde on the Mac you can also incidentally changed your view if you go out to the range documents icon in the Application bar and click on it you'll see that you have a variety of different ways to view your illustrations. For example, if I choose 2 up, then one of those illustrations is going to break out into an independent window, in this case Illustrator chose the last document close.ai and the others are all going to be consolidated in this first window and you can switch between them by clicking on this double arrow icon right there and choosing a different illustration.

For example, I going to go with Inactive.ai lets say for the red version of the illustration and then you can go and scroll both of these panes so that you can see them onscreen. In my case however, I am going to go ahead and switch to yet a different way of looking at my illustrations. I'm going to grab this guy right here by the title bar and I'm going to drag it and drop it in a random area and now we'll go ahead and display this illustration in an independent floating window and notice that the floating window can float in front of everything, in front of panels they can float up here in front of the menu bar and of course you can do this with as many windows as you like.

I could grab this guy right here and drag him out from the group as well. If you want to add a window back to the group, I will go ahead and drag this 1 down a little bit here. All you need to do is drag it in like so and you'll you see a blue outline around the group of consolidated illustrations and drop it in the place and it becomes consolidated as well. If you want to consolidate all of the illustrations no matter what then you go up to Arrange Documents and you choose this Guide, Consolidate All and they're all back together again. Now they are kind of out of order though, notice that, so I'm going to click on In pieces_welcome.ai and let's say for what ever fussy reason, I want this guy back where he was in terms of the order of the windows.

Then I'll go ahead and drag this Tab back like so and drop it in the place so that we have welcome.ai again then In pieces_welcome.ai then In pieces_inactive.ai, In pieces_ continue.ai, In pieces_join.ai and In pieces_close.ai, in exactly the same order I opened them in a first place. If you want all your windows to float you can go out to the window menu choose Arrange and choose Float All in Windows and then after that point notice that Cascade is currently dimmed. That's because it doesn't work unless you have floaters. So I'll go ahead and choose Float All in Windows and then you have the Option of either Tiling the windows or cascading them, up to you.

You can also Consolidate them once again which really I think helps maintain a less confusing interface, but of course this is a matter of personal preference. One other thing I want to show you I'll go the Window menu choose Arrange and choose Tile which does work with Consolidated Windows and notice that creates a Tile display right here, so that you can see bits and pieces of all of your illustrations at once. Unfortunately, you'll need to scroll them independently in order to see what's going on, but notice that you're devoting very little room to window elements, so that you can see as much of each illustration as possible and just align things up.

So that we can see each one of these illustrations, I will Click inside each illustration and I'll Press Ctrl+0 or Command+0 on the Mac in turn as you see me doing right here and now we'll go ahead and Center each and every one of these displays. That's how you work with a Tabbed Window Interface here inside illustrator CS5.