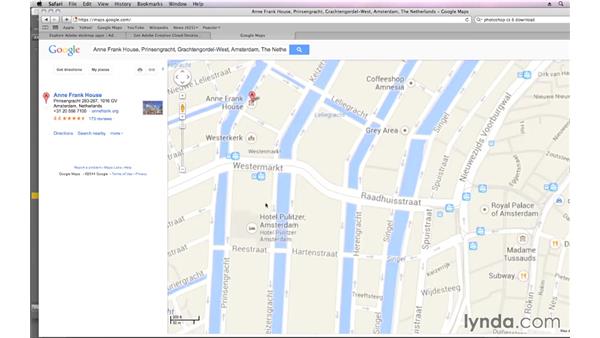 The research part of this particular project was pretty extensive, and a little different from the ones before. When I did Times Square, I went to Times Square quite a few times during those four years that I was working on it. I would make notes. I need this lantern. I need this street. I need this store front. And I would go there and actually take the picture. In the case of Amsterdam, well, it wasn't the same. Wasn't the same. And another big difference is that, Amsterdam is the first piece that I was inspired by the picture rather than the place.

Usually I'm walking there, somewhere down some street, and I'll see something and I'll be inspired. I want to paint that. But in the case of Amsterdam, I was looking at pictures and that's where I got inspired. Now I couldn't just pack up and go to Amsterdam every time I needed a picture of the particular building so that's where the research became a very unique way of doing things that I hadn't done before. Now, what happened is that, I was going through all my shots that I had taken some years before, when I was in Amsterdam.

And I was trying to organize things, in terms of labeling stuff and so on. And that's when I suddenly got inspired by the shot. So, here's the sequence that I was working with, and how I found where I was. And how I then, did that research. So right here was the first shot in the sequence. And what it was, on that particular day, as you can see, it's rainy, it's gloomy, and there was a long line to see the house at Anne Frank. I didn't want to stand in line there. My wife and I did not want to stand in this long line in the rain, so we said, let's go to this little place a friend had recommended a few blocks away.

So we start to take a little walk. Along the walk I took one of the many shots that I'm always taking on my walks. So the next shot that I took was this little shot right here. Now in this particular shot, what I did, I'm standing across the street, I decided to just take a telephoto shot. And I just took this zoom shot here, right here. There's the zoom. That was the inspiration for the painting. Right there. So after this, was the next shot. Which was the street that I was looking for with this little place here called the grey area.

So now, now I had the two places. And somewhere in between those two places was where. This inspiration was. So I went into Google maps and I plotted the two points. And there we see that there's the Anne Frank house and there's the Grey Area Cafe right there. So I knew that I went down a large street, which is this one right here. So once I knew where I was, it made it really easy to then go onto the streets, and actually see what I needed to see. What did I need to see? Well in looking at the actual painting here, this is the photograph.

Now in my work, you get in real close, and it's like being there. So everywhere you look, it's going to look into focus. So now if I come in here and let's just say we look down this street right here. And get real close to this area here. Now there's a lantern right there. There's this little storefront right here. That's a storefront. Okay? There's another lantern. There's another lantern. Can you really see the detail? Even the streetlights, it's just a big blurry mess. But I went into Google and I went to Google Maps. Here I am in Google Maps and Anne Frank's house being a point of interest you don't have to type much.

I just typed in Anne Frank and you notice that Anne Frank and right over it came up as one of the choices so I click on that. So once I knew where the place was I could see that it's right here. This is the little spot. So what I'm going to do is I'm going to get in a little closer to that little spot right there, and I want to go down to that corner. That's this corner right here. This is what I'm looking for. So what I'm going to do is take my little man and bring him right down into this area right there. So we'll place him right there in front of that building. And that's going to zoom in to that particular street view, right there.

So here we are on the street. So when I pan across here, I can see that these are the buildings that I've painted, right there. And I can walk down the street here, and look at the lanterns. And get all the detail that I want, the, the particular lantern right there. There it is. So what I could easily do is get real close to it. So I can study the detail of the lanterns, the, the designs on the banisters, everything. I can see all that detail. So that then. When I get to a particular place, like let's just say we go down to this store right down here.

Let's go all the way down here to the store front and we can see the little store front right here. There's that store front. And, and by looking right at it I can see that it is in fact the, clothing store and there's some mannequin's in the window. Right there, see. So I can see every detail of what the street looked like. So therefore, I can then go into my Photoshop, and in my actual painting, which I'm going to at a little closeup of that left area, there's the lanterns. So here we can see I have the detail.

That I needed for the lanterns, they're all there, exactly the way they need to be, and there you can see, there's the store. And there's mannequins in the window. You can even see the sign, because I stood right underneath that sign, to see what it was saying. Likewise, I come back to the photograph here, and I see here, there's some stuff here on the left. Way over here on the other side, there's some, bunch of buildings and in the photograph, you really can't tell what they are. For instance, right here there is this store front there. What is that store front? And this building here, let's pull back just a little bit, what is that building? Okay.

So if I go in to the folder for building number seven, you see that right here. I have an opening, another folder called reference. And in reference. So right here. And we can come in close and we see that there's this street view shots that I took of that building. So I can see where that dark area was. It was this little tiny balcony right there. See, a little balcony. And I can go into a preview mode of that so you can see what that looks like. And there, it's not as clear as I need but it's clear enough for me to get. All the details that I want.

And there's it, it's lantern and all the details that go into the building. They're all there because I was able to study it by actually standing in front of it. It kind of changes the, the outlook for people who have to do research on places that are nowhere near them. Or they want to paint some street in Kuala Lumpur, but they just can't get on a plane tomorrow morning. Now you can walk up and down those streets and do all the research you want.

8/29/2014
Bert Monroy creates digital paintings that fool the eye and delight the senses. And he's been at it for over thirty years, producing illustrations for clients such as Adobe and Pixar. Follow along in this course with the development of his latest work, Amsterdam Mist, and learn how to apply his techniques to your own artwork in Photoshop or Illustrator. Bert concentrates on the structures in the painting: the bridges and buildings that make up the incredibly detailed canal scene. He'll show how to model elements like railings, curbs, windows, posts, staircases, lamps, and even flags. He'll also create textures and show how to repurpose them throughout the painting. Join him on this journey to the Netherlands and return with souvenirs that you can add to your artistic toolbox.