The power of icons 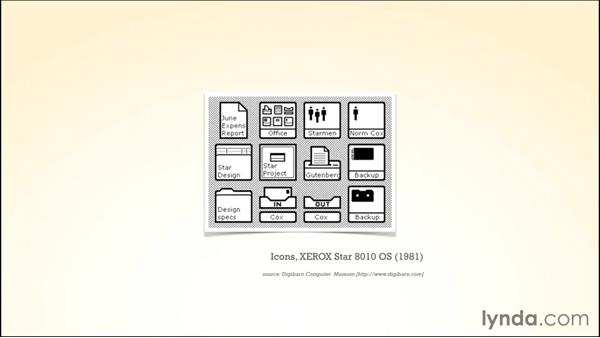 Join James Williamson for an in-depth discussion in this video The power of icons, part of Designing Icons for the Web.

- In this chapter, I want to focus on the planning process for designing icons. Over the years, I've found that the planning phase is normally the most neglected part of any design process. Proper planning is the cornerstone to solving design. So, make sure you budget enough time and energy to planning your icons at the very start of the design process. I want to start by examining how icons work. Understanding what icons are and how they work will dramatically improve your ability to create successful icons.

One of my favorite quotes about icons comes from the great Jon Hicks. He says that "Icons are little miracle workers. "They circumvent language obstacles, "give concise warnings and directions, "convey our moods and show which buttons to press." To me, that gets to the very heart of what an icon is. An icon is not a logo, although the two are often confused. Instead of communicating brand the way logos do, icons communicate instructions, ideas, and actions.

In short, they educate. In this way, icons are a universal language shared by all. I don't know kanji, for example, so if I landed in Japan, and this was the very first sign that I saw, I'd be pretty confused. However, if you add icons to the mix, I'm quickly on my way to customs. The ability to communicate through symbols is deeply ingrained in the human experience. We've been making symbols to communicate with each other for as long as we've been around.

These are icons, of a sort, and they were painted on a cave in Argentina 9,000 years ago. These are Sumerian pictographs from 3500 BC, and these are icons that pre-date the first written language. These Hopi Indian petroglyphs are over 800 years old, and, honestly, they would look right at home in any symbol font. And this image stone from Sweden hails from 400 AD. Mac users are probably pretty familiar with that symbol in the middle of the stone.

Across all cultures, humans are conditioned to learn through images. And that's one of the things that makes icons so effective. To me, that's the true power of icons. They give us shared imagery with which we can communicate ideas and instructions. They're languages. So, it's no wonder that icons made their way into computing rather early on. Now, this is a set of icons from Xerox Star OS. And this was the precursor to all GUI interfaces. Many of the conventions that we rely on now for UI icons came from this source.

Note, for example, the folder icon, the inbox, and the document icon. It's fascinating to me to go back and see the design process of these, now, familiar icons. This, for example, is the evolution of the document icon. I love this icon. It's simple. It's elegant. And it communicates, almost instantly, what is really a rather abstract concept. As you can see, developing an icon like this is a result of a lot of hard work. This is just one of a number of icons that have become standard ways that we communicate in computer user interfaces and on the web.

Consider this selection of icons from PJ Onori's fantastic iconic set. Although wonderfully designed, each of these icons is based off of long established conventions. This allows them to immediately communicate their purpose to anybody that's familiar with them. Although I'm sure that almost everyone watching this can probably identify all the icons that are shown here and what they represent, for people that are unfamiliar with computers or the web or mobile devices, many of these icons would be confusing. Consider the signal bars and map pin icons.

If you didn't already know what those icons represented, their function isn't automatically obvious. An this is, perhaps, the biggest challenge in designing icons for the web. We're often tasked with representing elements or concepts that are either new, or are highly abstract. Consider these Hobo icons from the 1920's. While they represented very specific concepts, they were only understandable to the initiated, to those who really understood the language that they were sharing. Although they're probably pretty confusing to people today, they're really fantastic icons because they're clear, they're concise, and they quickly communicate their meaning to those that understand them.

And that is the hallmark of good icon design. Susan Kare, designer of the original Apple icons, has this to say, "It doesn't matter "if the feature an icon represents is immediately "and intuitively obvious; what matters is "that once you've made the link in your head - "once you've learned what an icon does - "some quality of the icon makes that link unbreakable." That's what you should strive to do with every icon that you design. Create that unbreakable link between the icon and what it represents and take advantage of the true power of icons.

8/27/2015
Learn techniques and best practices for designing smart, visually interesting web icons in any software, in this guide with senior author James Williamson. First, find out what makes icons most effective and how to plan your design right from the start. Then review the best practices for brainstorming, sketching your ideas, and finding the right visual metaphors. James shows how to build your designs at high resolutions and create variations that will work at smaller sizes. Finally, learn how to export your work to multiple file types, and optimize SVGs, one of the most popular formats for icons.
Topics include:

Video: The power of icons