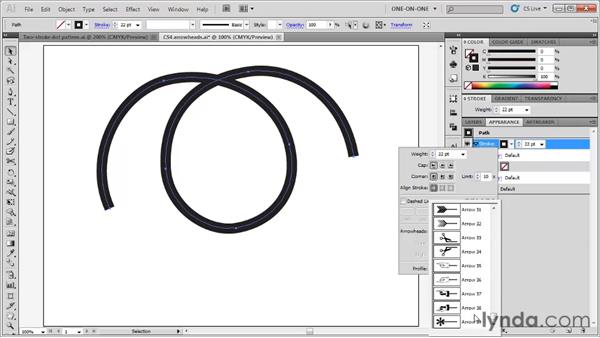 In this exercise I am going to demonstrate how you go about creating and using arrowheads in Illustrator CS5. We will also see how that's changed from the behavior in Illustrator CS4 and earlier. Those of you who have been using the product for a while, you know what CS5 is going to do with your archival files. So what I would like you to do is go ahead and open this file right there, it's called CS4 arrowheads.ai. It's I found inside the 07_fill_stroke folder. I did create this file inside of Illustrator CS4, but I could have just as easily created it CS3 or CS2 going all the way back to the introduction of Live Effects inside of Illustrator.

I'll click on the outline for this curlicue path to select it and you can see that I have two arrowheads; a traditional arrowhead over here at the end of the path and at the beginning, I have a tail, but it's also created using the arrowheads function. Now in CS4 and earlier in order to access arrowhead, you would go up to the Effect menu, you would choose Stylize and then you would choose a command that's no longer there. At the top of the submenu there used to be a command called Add Arrowheads. Thankfully even though the command is gone, Illustrator CS5 continues to support this function and to see what I mean, go to the Appearance panel and at the bottom, you'll see this item that's called Add Arrowheads.

That is the Live Effect right there. Go ahead and click on it in order to bring up the old dialog box. So everything is still here inside of CS5 when you're opening your old files, but I encourage you to switch over to the new style arrowheads as I will show you a moment, because the old way was pretty clunky. Notice that you could switch between 27 different arrowhead types either at the start or the end or both as I've specified and you can switch between them by clicking on these little arrows right there and then you can preview your modifications like so.

You also have a Scale value, but that Scale value affects both of the arrowheads. So if I raise it to 100% for example, and press the Tab key, then I make both the arrowhead and the tail larger as you can see. So the old Add Arrowheads function still here, but the new arrowheads function is much better. I will cancel out of here. It's found inside of the Stroke panel. And notice by the way, I want you to see this. See how there is a little bit of a gap between the end of the line and the arrowhead? I could fix that, even in the old days I could fix that by going to the Stroke panel and switching the Cap to a Projecting Cap like so.

That goes ahead and fills in that gap. I'm going to undo that modification so that we have the gap again just so that we can compare the new arrowheads feature. So I am going to grab the old Add Arrowheads effect and I am going to throw it in the trash and then the path outline is still selected, notice that I'm going to bring up my Stroke panel by clicking on Stroke here in the Appearance panel. Let's start things off by adding an arrowhead to the starting position. So this is the start, this is the end. I will go ahead and click on this down pointing arrowhead and then I can choose an arrowhead from the list.

So we've got more arrowheads to choose from. So you have the old 27 plus 12 more I guess since there are 39 in all. Then include things like this asterisk (*). Also, you have the scissor marks right there, if you want to indicate a coupon cut, that kind of thing. Some grayscale arrows as well; so they are not all black and white like they used to be in the old days. However, I am going to stick with my old settings, that is, Arrow 1 which is the arrowhead and then I will go ahead and assign Arrow 20, which was that tail that we saw just a moment ago.

You can see the effect we are getting. It's entirely different than it was before. In our case, it's quite wrong actually, but notice among other problems that I went ahead and assigned the arrowhead over here number 1 to the beginning of the stroke and the tail number 20 to the end of the stroke. I don't want that. So I can switch them around. I can swap those two arrowheads with each other just by clicking on this little swap icon. I can also scale each of these arrowheads independently. So I am going to take the Scale value for the tail down to 80% and then I am going to leave the head set at 100% or at least I would like to.

Right now they are linked to each other. So I will go ahead and turn off that link and then I will change this arrowhead value that is arrow number 1 to 100% like so. Then notice we have alignment function. So you can either replace the arrow tip at the end of the path, the way I have. So in other words the tip of that arrow ends right there at the anchor point and the tip of the tail is well aligns to the other end point. If you would rather move them out, the way they used to be in the old days so that the arrow begins at the anchor point instead of ends at that location.

Then go ahead and click on this option, Extend the arrow tip beyond the end of path like so. Notice that Illustrator is better at alignment. Now you may still end up with slight gaps when you select this option and if you do, then just try out a different Cap option either the Round Cap or the Projecting Cap; one or the other should satisfy your needs. Now check this out. This is also very cool. Let's I am happy with the ratio between these two arrowheads. In other words, 80% for the tail and 100% for the head. However, I still want to make them smaller.

This is a very unusual linking option inside of Illustrator. Now I can link these together and I could say, you know what, I want to take the arrowhead down to 50%, press the Tab key, that automatically scales down the tail to 40%, which is half of 80%. So it goes and keeps the ratio between tail and arrowhead. That's too small in my opinion. So I will bring the arrowhead value, Arrow number 1 up to 70% like so and then I am going to need my Projecting Cap again. So I will go ahead and turn it on. So that gives you a sense of how arrowheads work here inside of CS5.

They are no longer displayed as a Dynamic Effect as you can see now here inside the Appearance panel, instead you access them from the Stroke panel. In the next exercise I am going to show you a real world double-stroke arrowhead example.