The basics of the Illustrator interface 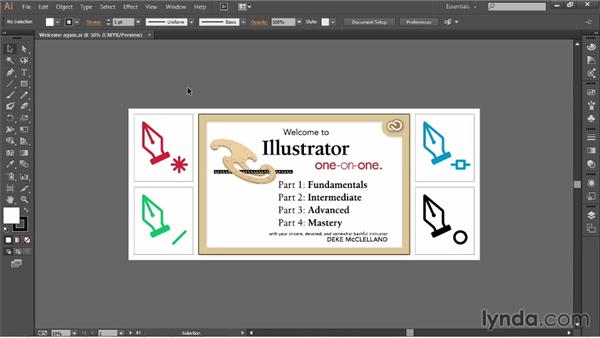 In this movie I'll introduce you to a few basic concepts where the Illustrator interface is concerned. First of all, you'll notice that its quite notice by default but you don't have to accept it that way if you don't like. If you want to change the brightness of the interface, then go up to the Edit menu, this would be the Illustrator menu on the Mac. Drop-down to the Preferences command, which is not nearly so far down the list on the Mac. And then choose User Interface. And that will bring up this dialog box right here, and you can see that you can choose from other Interface options. For example, you can switch to Light, which is the way things were back in the days of Illustrator CS5 and earlier.

And you can switch to Dark, and by the way, we've been able to do this for a long, long time. It's just that in the olden days If you switch to a Dark Interface, the text remained dark as well. So that it didn't automatically invert, which made it completely illegible. You also have the option of dialing in your own custom interface value if you like. So I could set it to medium, by dragging on this little slider triangle, and at some point, once you cross the threshold, like so.

You're going to dramatically increase the brightness of the interface, and that's because at some point Illustrator needs to invert the type from white to black. You would never want for example, to have gray text against a gray background. I'm going to go ahead an dial this guy down to about 20%, which darkens up the interface a little more than its default. An then I'll go ahead an click OK, to accept that change. Now, you also have the option of changing the brightness of this area behind your document, outside of the art boards.

And what I have incidentally is five art boards, as you can see here. One big one and then four smaller ones with these big Pen tool cursors, inside of an even larger art board. So the area outside the art board, I'm going to zoom out a little bit here by pressing Ctrl+minus, Cmd+minus on the Mac. It's known as the pasteboard. And notice, if I go ahead and grab this cursor right there, and I drag it out into the pasteboard, that empties that art board right there. And it allows me to keep this artwork without, say, throwing it away. So you can throw all kinds of trash out here on the pasteboard. And it gets saved along with the document.

The problem is it's easy to lose dark objects against the dark pasteboard. It's great for bright objects, but for darkish objects not so much. If you want to brighten the paste board, then, this time I'll press the keyboard shortcut which is Ctrl+K, or Cmd+K on the Mac, for the Preferences command. And then I'm going to switch to User Interface right there. And notice this item canvas color. Between you and me, I don't know anybody who calls it the canvas, everybody calls it the pasteboard. But in any case, notice that you can set it to white. You can't make it any other color. It's either white or match user interface brightness, in which case it brightens up along with the interface, like so.

Anyway, I'm going to leave it dark, so I'll just go ahead and cancel out. One final thing, notice my two-column toolbox. Over here on the left side of the screen. Most likely it's not going to popup that way for you, unless you have a pretty small screen. Otherwise, you're going to see a single column toolbox, and you can switch back and forth between them by clicking on this little icon right here. So If it's a double left icon, you can switch to a single column tool box like so. If it's double right, you can switch to a double column. I'm going to keep it single throughout these movies, because that's more likely to match your screen. And that way you'll be able to better track which tools I'm using. The one thing you have to bear in mind is.

I will go ahead and switch to double column again, I am losing a few tools and some functionality down here at the bottom of the tool box. Notice that the last tool I see is that slice tool, right there and only barely see it. So I am missing a few tools which is why every once in a while I'll need to switch back and forth between the single and double column tool box. And those are the basics of working with the interface here inside Illustrator.

Video: The basics of the Illustrator interface