Zooming a document and its artboards 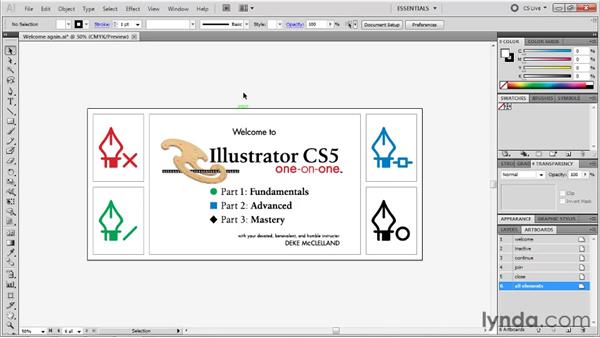 I'm going to start things off by showing you how to navigate inside of Illustrator. That is how to get around inside of your document, how to zoom, how to scroll, how to switch from one Artboard to the next and so on. I'm working inside of a file called Welcome again.ai found inside the 02 workspace folder. It may seem very similar if not identical to that file that we saw back in the introduction to the series, when in fact there's actually quite a few differences going on and we'll see those once we zoom out of the illustration. You may be seeing them on your screen already, but here in the video we're pretty tight.

Now notice that my titlebar says 100%. Yours should too, because the last used zoom ratio is saved along with the document and that is ostensibly the size at which the illustration will print, but I have news for you, not accurate. Illustrator's assuming that your screen resolution is 72 pixels per inch, which most certainly is not, more likely, it's somewhere between 100 and 120 pixels per inch, which means what you see onscreen at 100% is actually smaller than the print size.

So you don't want to get hung up on the notion of print size; instead, you just want to take 100% as being a baseline from which the other zoom ratios are measured. Also, if you're working inside of a Web Graphic. as we'll discuss in a later chapter, why then the 100% view gives you a sense for the pixel clarity inside of your image. All right, so, let's say I want to zoom out to take in more of my image, I can go up to the View menu and choose one of the Zoom commands, and we have a total of five of them, ranging from Zoom In to Actual Size. So in my case I'd choose Zoom Out to zoom out incrementally, but if I'm going up to the View menu, every time I want to zoom out, I'm going to be wasting an awful lot of time inside this program.

So you're much better off memorizing a few keyboard shortcuts. To zoom out you press Ctrl+- or Command+- on a Mac, pretty darn easy to remember, and it works inside of virtually all of the Adobe applications. So if I press Ctrl+-, Command+- on the Mac, then I zoom out to the 66 and two-thirds percent zoom ratio that you see right here, and then if I press Ctrl+- or Command+- again, I go out to 50% and so on. Now notice that this document contains a series of Artboards including this overarching Artboard that encircles everything, and you can find these Artboards here inside the Artboards panel, we've got welcome which is the central Artboard.

That's number one and then number two is this guy inactive, number three is the green one continue, number four is blue join, number five black close and then number six all elements here. Now two through five incidentally if you're wondering what those names are, they're all based on the purpose of these pen tool cursors and these are indeed the cursors that you experience when you're using the pen tool inside of Illustrator, the pen tool being one of the most powerful tools in all the software and a tool that we will be discussing at length in the future chapter and these are the various cursors you see, because the cursors are basically always talking to you inside of Illustrator.

Inactive, this guy, the red one, it's not really red when you're using. It is just black. I have it red for design purposes. That indicates that no path is active, so you'll be drawing a new path, then the next one continue means your continuing an existing path, join means your joining a couple of open paths to each other, close means you're closing an open path and creating a close shape and we'll be discussing those in more length of course. However, I just want you to know what's going on inside of this illustration. So let's say now that I want to zoom in on my illustration, which I most certainly do, I'm too far out to see the details inside of my file, so I'll press Ctrl+plus or Command+plus on the Mac, and every time I press Ctrl+plus or Command+plus, I zoom in.

Now notice, unlike in say Adobe Photoshop, you can zoom in past the 100% and still see more clarity and that's because we're working with objects that are being rendered to screen pixels on the fly, so there's all kinds of definition inside of these files. In fact, right now I'm at 600%. That's nothing. I can zoom all the way in I'll keep on zooming past the point where I have anything to zoom in on because the central portion of this illustration is actually empty.

I can zoom in to 6400% that's a 64 times zoom and what I like to say is that it's sufficiently zoomed in, if you had a 64x magnifying lens, you could actually see individual bacteria in the real world. Now there's no bacteria here, inside of a digital illustration, but still that gives you a sense of just how zoomed in you are. You're way beyond anything that's going to print. So if we had a tiny line across our Artwork at this point, that is the line that would not hold up in commercial reproduction.

Anyway, thankfully we don't, but such a zoomed in view can be useful for making sure that points are aligned with each other and so on we'll see examples in subsequent chapters. I'm going to go ahead and zoom back out by pressing Ctrl+- or if I want to make a little faster progress, I could go up to the View menu and notice that we have this command Fit Artboard in Window, Ctrl+0, Command+0 on the Mac. That's going to zoom you sufficiently far out that you can fit the active Artboard inside of the illustration window, which in the case of all elements means that we're pretty far zoomed out.

If I were to click on something like inactive right here of that page and then press Ctrl+0 or Command+0 on the Mac, then I would fit in onscreen. And that by the way is the same as double-clicking on one of these Artboards here inside the Artboards panel. So if I double-click on welcome I'm going to zoom in on it and so on. I'll go ahead and zoom back out to all elements, like so. You can also go up to the View menu and choose Actual Size or press Ctrl+1, Command+1 on a Mac to zoom in to 100% and finally if you want to take in all of the elements inside of your entire document, then you go up to the View menu and you choose Fit All in Window, Ctrl+ Alt+0 or Command+Opt+0 on the Mac and that's going to take in all of the Artboards and all of the objects inside of this document.

Now you also have a couple of tool tricks that you can take advantage of if you want to, and what I'm going to do is switch over to inactive once again so we can see the difference. If I double-click on this guy right here, the Hand tool, inside the toolbox and it won't be quite this far down the list for you, I just happen to be working on a very short display right here so. So some of my toolbox gets cut off at the bottom, don't worry about that. I'll be showing you all the tools of course. But for now I'm just going to double- click on the Hand tool and what that does is it fits the active Artboard inside the illustration window, so that's the same as going to the View menu and choosing Fit Artboard in Window or pressing Ctrl+0, Command+0 on the Mac.

If you double-click on the Zoom tool right there, that takes you to the 100% zoom level. you can see it right there 100%, centers the active Artboard and that's the same as going to the View menu and choosing Actual Size or pressing Ctrl+1, Command+1 on a Mac. So, a lot of different ways to zoom around your document here inside Illustrator.

Video: Zooming a document and its artboards