Working with specialty fonts and effects 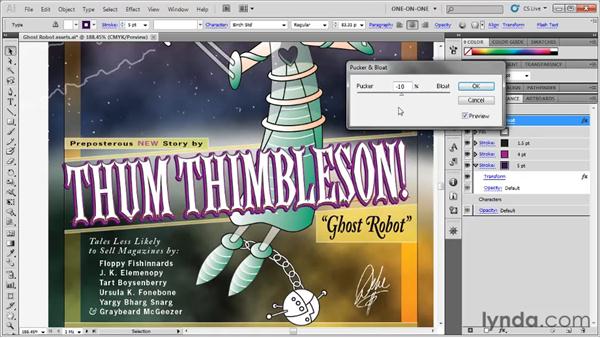 Over the course of this chapter I want to give you a sense not only for how all the various print options work inside of Illustrator, but also how you go about handing a job off to a print house for commercial reproduction and get the results that you expect. I am looking at a document called Ghost Robot assets.ai. It's found inside the 11_printing folder. And it features a bunch of different variations on this Ghost Robot character that I created specially for my Illustrator One-on-One series. I've been using this character for years. This time I've gone ahead and assembled the character into a multiple Artboard document.

If you switch over to the Artboards panel you'll see that we have five artboards in all, all of which serve a different purpose and are named according to their function. And we will examine what's going on with those artboards in another exercise. But for now I want to address the issue of font. The first two artboards contain all kind of live text. And the text is set in a variety of different fonts. Now all of these fonts are suppose to ship with most of the skews of Creative Suite 5. But there is always a chance that when you open this document on your system you'll end up getting a font warning that tells you that you're missing some fonts.

And they'll have to be substituted with fonts on your system. What I am going to do is I am going to prepare a version of the document that has no fonts whatsoever. And I am going to do that in fact in these videos. And that way you'll be able to open that document on your system without any error messages whatsoever. But before I convert the text I want to go ahead and show you what's going on. So I am going to zoom in here to the first Artboard, so that we can see this angled author name right here. So this is supposed to be the name of the author of the lead article inside of this publication.

And if I click on its baseline to select it with the Black Arrow tool, up here in the Control panel I can see that the font is set to Birch Standard. However, this is no ordinary Birch Standard right here. If I switch over to the Appearance panel, you can see that I've assigned a dynamic effect of Pucker & Bloat. And if I turn that effect off, this is what Birch Standard looks like all by itself. That is of course subject to a white fill and three different strokes as well. Each of the strokes, incidentally, is slightly offset using the Transform effect.

So I've got a combination of Transform effects that are applied to each one of the strokes and then Pucker & Bloat here to the entire text object. And you get to Pucker & Bloat by going to the Effect menu, choosing Distort & Transform and then choosing Pucker & Bloat. And I have to tell you it's amazing what you can do with dynamic effects inside of Illustrator. Bear in mind, by the way, that this effect right here is being applied to live text. So in other words this is still editable text. I can change it using the Type tool, I could replace characters.

I can fix typos and so on. And to just give you a sense of what Pucker & Bloat is doing, I'll go ahead and turn it on. Notice how that changes each and every letterform. I'll go ahead and click on it. So in other words I'm inventing my own custom variation on a font. It's like I can create my own style on the fly. And in this case I've got a Pucker value of -5%. And I say it's a Pucker value because negative values are Pucker, positive values are Bloat. If I turn on the Preview checkbox and then I reduce this value let's say to -10.

Notice the big difference there. I go ahead and increase the curvature of those serifs and those stems and so on inside of my characters. And I can bloat the text as well if want more of a pillowy feel, then I can reverse the effect by getting rid of that negative value and then pressing the Tab key. And you can see I end up with these puffy marshmallow characters instead. So it's just amazing what you can accomplish. And one of the reasons I'm harping on this is because we are going to spend a lot of time looking at dynamic effects and other appearance attributes inside the Advanced and Mastery portions of this series.

And if you've made it this far, nearly 200 movies into the fundamentals portion of this series, then you really owe it to yourself to go all the way through, because the advanced chapters are where we really get down to the awesome features inside of Illustrator. Also note if I go ahead and scroll up here that I set the title of my publication in a font called News Gothic Standard. Of course I've modified that font. I've gone ahead and applied a Warp feature, Bulge specifically. And if you want to check out my settings you can just go ahead and click on Warp Bulge right there, and you'll see that I have a Bend of -7%.

I am going to cancel out of there. And incidentally to get to the Warp features you go to the Effect menu, you choose Warp, and then you choose whatever it is that you want to work with. You can always switch those out later again. We are going to see those in more detail in the advanced and mastery series. Alright, I'll go ahead and escape out of there. And finally down here check out the word Ghost Robot. I am going to go ahead and click on it in order to make it active. I'll zoom in as well. And notice that not only is it set in Adobe Caslon Pro, it's set in the Bold Italic Style.

And this is very important because we have some Swash characters going on here, the G and the R. And you can often access Swash capital letters when you're working with an Italic font, they are almost exclusively associated with Italic Styles. And you get to them, assuming you're working with a modern OpenType Font from the OpenType panel. And to get to that panel you go to the Window menu. You choose Type way at the bottom of the menu, and then you choose OpenType. You also have that keyboard shortcut there of mash your fist T, so Ctrl+Shift+Alt+T, Cmd+Shift+Option+T on the Mac, T for Type of course.

And there is your OpenType panel. And notice that you have all sorts of options for automatically replacing characters. For example, this Fraction icon will automatically replace 1/2 with the pre-built one-half fraction if your font offers such a thing. Anyway, in this case I've gone ahead and turned on Swash. So if I turn it off, notice the G and R are replaced with their standard variations, which are less than exciting of course. I really wanted to highlight the swashbuckling nature of my Ghost Robot.

So I went with the Swash characters. Now not every single capital letter is available as a Swash. To check out what's really available to you with any given font then you go to the Type menu and choose Glyphs. And you may recall that the Glyphs panel allows you to inspect every single character that the typeface offers. I am going to go ahead and hide that panel and zoom back out. So the question at this point becomes, what do I do about all this specialty text? I certainly don't want to lose any of these text effects just because my printer doesn't have the right font.

Imagine, I hand this off for commercial reproduction and my guy says he's got Birch Standard, but then lo and behold it turns out he didn't have it. And not only is this going to print in the wrong typeface, but my specialty effect right there, Pucker & Bloat, is going to go to rack and ruin. It isn't going to look right at all. So what do I do? Well I'll show you how to convert all of this specialty text to path outlines in the next exercise.