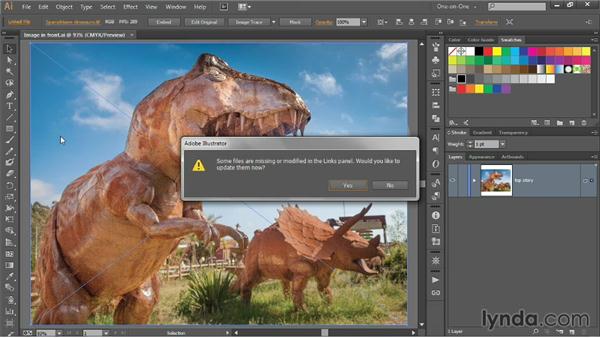 In this movie, I'll show you how to work with linked images here inside Illustrator. Now there is a couple of different ways to start things off. Let's say we're working inside a document that contains dozens or even hundreds of image files. And we're not actually looking at the image we want to modify. Nor is any image selected. In that case, you can modify any single image, whether you're looking at it or not. By going up to the Window menu and choosing the Links command which will bring up the free-standing links panel, and it'll list every single image file in the document.

Then you just click on the image you want to modify. And you take advantage of these options down here, which we'll review in just a moment. The other way to work, I'll go ahead and hide the links panel, is to select the image and modify it from the control panel at the top of the screen. Now, the easiest way to select an image, is to just click on it with the black arrow tool. You'll know it's selected because you'll see a frame around the image. And you'll also see an x drawn through it. Now notice these context sensitive options up here in the control panel starting with linked file.

If you click on that you will see that very same links panel that we saw a moment ago. For now I'll go ahead and hide the panel by pressing the enter key, or the returning key on the Mac, and I want to direct your attention to these items right here. We can see that this is an RGB image just as if we had captured it with a digital camera and made no modifications whatsoever. Now, you'll hear some folks say, that if you want to print the image, that is, if you want to submit it to a commercial printer in particular, you want to go ahead, and convert the image to CNYK inside Photoshop before you place it into Illustrator. That's not actually necessary.

And the reason is, all of the Adobe print apps, specifically Photoshop, Illustrator and InDesign, rely on the same print engine known as the Adobe color engine or ACE. And so what that means is whether you convert the image permanently from RBG to CMYK in Photoshop. Or whether you do so on the fly inside of Illustrator, you'll get the very same results. Next we have this option that tells us the resolution in pixels per inch, also known as PPI, and we're seeing that this one is 289.

Now, let's take a look at the creative things you can do. I will go ahead and click on linked file again, and we are going to take a look at each one of these icons down here at the bottom of the panel. In the opposite order they occur. So from right to left, starting with this pencil icon which allows you to edit the original image in Photoshop. So I'll go ahead and click on that icon, and that launches Photoshop if it's not already running. As well as opening the image, and now let's make a very simple modification.

Just about the easiest thing you can do in a program by going up to the image menu, choosing adjustments, and then choosing the invert Cmd, and notice it has a keyboard shortcut of Ctrl+i. Or Command I on the Mac. So very straight forward, and that creates as you can see, an unambigious modification. Now I"ll go up to the file menu and choose the Save command to save my changes to disc. And now I've really done it folks. I've modified every single pixel inside this image.

So let's go ahead and switch back to Illustrator now. And notice as soon as I do, Illustrator tells me that some files are missing or modified in the links panel. Would I like to update them. And of course I would. So I go ahead and click on the yes button and I end up seeing that inverted version of the image. Naturally this is not the effect I want. So I'll edit the image again this time by taking advantage of this button. So this edit original button does the exact same thing as the pixel icon. Just go ahead and click on it brings up the image inside Photoshop.

And I can reinvert the image by pressing Ctrl+I or Cmd+I on the Mac. And that reinstates the original image pixel for pixel. Which may seem strange, but that's the way it works. Because every single luminince level, has a unique opposite. All right. Now I'll go ahead and once again update the document by pressing Ctrl+S or Cmd+S on a Mac, and I'll switch back over to Illustrator. The program will ask me that same question as before. This time, I'm going to say no. By clicking on the No button, and the reason I am doing that is that I want to show you another way to update the file.

You do so by clicking on link file, and then notice that we have this warning icon to the right of the file name. And that tells us that something new has been done to the original image on disk, to see those changes click on the next icon in Update link. And you will see the changes reflected on screen. But you may not see the Caution icon disappear. If you don't, if it goes ahead and hangs on in there, then click on Link File to hide the panel and then click again to bring it back up on screen.

And the Caution icon should disappear. This next icon, Go To Link, allows you to go to the art board that contains the image set selected, here inside the Links panel. That's great of course, if we have dozens, or hundreds of images, inside of our file. In our case we just have the one and we're staring right at it. This final icon right there, the first one really allows you to link to a different image on disk. Let me show you what that looks like. I'll go ahead and hide the panel by pressing the escape key and then I'll right click inside the image and choose a range And then choose send it back.

Or I could press that keyboard shortcut, Ctrl > Shift > left bracket, or Cmd > Shift > left bracket on the Mac, and then we'll send the image all the way to the back of the stack. Unfortunately, that sends it too far back, so I'll nudge it forward by pressing Ctrl > right bracket. Or Command Right Bracket on a Mac. And this is exactly where I want to place the image, but it doesn't really look exactly right inside the composition. I'd like this image to have more of a random feel, so the dinosaurs are at something of an angle And the image is darker, more terrifying, a little more film grain.

And it feels as if I was lucky to catch it in the first place. Which is why I modified the file in Photoshop and saved in alternate version. To link to that version, click on link file once again. And then click on the re-link icon. If you're working along with me, then navigate to the 19 placed images folder, in which you'll find a file called kingpin and henchmen.tiff, which is the alternate version of the image. Notice that we have a replace option right here. It's dimmed, but it's checked, which tells us that we are going to replace the selected image file, and you do so by clicking on the place button.

After which you'll see this alternate, more terrifying version of the photograph. Now again you may not see things update here inside the panel. Notice that I'm still seeing the name of the panel as spanishdinosaurs.tif. If that happens to you just go ahead and hide the panel. And redisplay it once again, and now you will see the proper file name. Finally, you can locate additional information about this image file by clicking on this little triangle down here in the lower left corner of the panel, which will reveal this link info.

So we can see the file format, and the color space, and soforth including this different ppi. Notice the resolution of the new image file is 267 pixels per inch. You'll also see a creation date. And if you been working along with me, it will be today, whatever today is for you. And then finally, notice this complete path which tells you where the image is located. If you want to see the image on disk, then just go ahead and click on the little folder icon, and Illustrator will open the folder inside of an independent window.

And that folks is an exhaustive look at how you work with placed images here inside Illustrator.