What is isometric illustration? 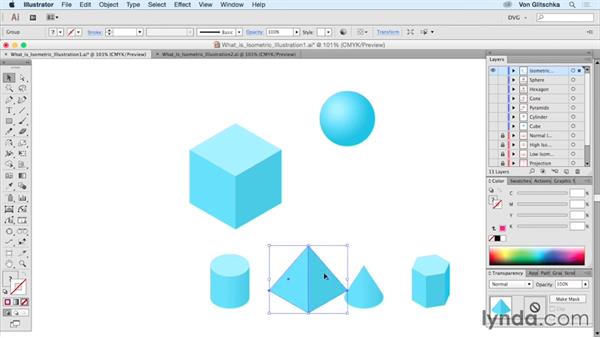 Join Von Glitschka for an in-depth discussion in this video What is isometric illustration?, part of Drawing Vector Graphics: Isometric Illustration.

- Isometric illustration uses what is called isometric projection to create a visual representation of a three dimensional object in two dimensions. Isometric comes from the Greek for equal measure, and the parts that make up an isometric object, will all align to the same scale of projection. It essentially creates an illusion of perspective, but unlike true perspective that has a vanishing point, where the object gets smaller or larger as it relates to it, an isometric object remains the same, regardless of where it's placed in a composition.

So the object up above the right plane, both the top edge and the bottom edge, if you project those out into perspective, they go back to the same vanishing point. And they do that both on the left, and on the right side. If you're dealing with an isometric object, they're always set at the same angles, meaning 30 degrees whether it's the left plane or the right plane, and the top edge and the bottom edge, those lines never intersect, they always run in parallel to one another.

It can be a high isometric projection, almost like if you're higher up in the air looking down on it, and the degrees, once again, could vary from 30 degrees, maybe it's doubled, it's 60 degrees, but for this course, we're gonna stick with normal isometric projection, and those normal settings are 30 degrees, projecting off to the left and right. Now the reason why it says 150 over here, is because in Illustrator, if you start at the base, and you go counter clockwise, it's 30 degrees, you hit 90 all the way over to 150, but technically, both sides are at a 30 degree angle.

So the most basic of all shapes when you're creating isometric illustration is going to be a cube shape. And this is the way you can think about and frame isometrics in your thinking to kind of help you as you create any type of shape, cube or otherwise, and that is, you're gonna have a top, a left, and a right side. You're never gonna see the back side of your shapes, in terms of this view, it's not gonna happen unless of course, you have some kind of see through area on a shape, and it's showing to the back.

That's a little different, like maybe it's the top of a box that's open, you see the back planes. That's a little different. But the same principle applies there as well. So a cube shape, this is what it would look like, but there's other kinds of shapes you can still associate with a cube, such as a cylinder shape it still fits the isometric projection, and it's handled in the same fashion, but instead of having distinctly flat planes, it has a curved plane, so this is where you just use a simple gradient from a darker tonal value, to a lighter, to give the illusion of that coloring.

So these are the easiest of all shapes to deal with. Now when you have any shape, and it's been built out in an isometric projection, the nice thing about it is you can grab these shapes, and you can scale them as large, so let's put this here, and we'll bring it to the front, and we'll move this ball over here, we'll take this pyramid, we're gonna size this up a little bit, and we'll put it here, bring this to front, and maybe we'll put the ball on top here, so we'll put that there, bring this, maybe we put that further back, take this one, size it up, take this one, and bring that forward like this.

If you had created this one in a two point perspective, and you tried to do the same thing, it wouldn't work because none of the shapes would align with those vanishing points. So that's the beauty of isometrics. Now, it's easy to show you and demonstrate this in a geometric form, but let's switch to an illustration created in an isometric projection, and I'll demonstrate it within the context of a project like this. This is a isometric illustration of a neighborhood, and I projected everything out with the same angles of a 30 degree normal isometric projection, and to create an illusion of perspective, we're gonna create a house in the foreground, and it's using the same isometric projection, but just because it's larger, it gives the illusion that there's a perspective here, that it's closer to the viewer, than the homes in the foreground.

I also put in this little hill, so it makes it look like it's sitting up on a hill. Back below it, is the neighborhood behind it. Well, you can still utilize isometrics and size things differently in order to make things work. So let's say they decide to build a house in this new area, this lot down here. Somebody bought the property, they're gonna start building it out, so what we want to do now, is we want to change our foreground house, like this, and we're gonna take this, and we're gonna move it down, and place it into this new build location.

So we'll go ahead and just move it over, I'm gonna size it down, so we'll go to the Scale tool, and in this case, we're gonna do it 60 percent, and that matches the sizing of the other houses. We'll zoom into this corner, and I'm just gonna go ahead and place that right there. And we're gonna move it to the correct layer, the new home, like that. And then we'll zoom out, and you can see how it now looks like it's in association with the neighborhood down below.

So that's how you can utilize isometric illustrated elements in terms of an overall composition. It works because they're all projected the exact same way, so if we turn on our foreground again with a new house, so we can still get that same illusion that the perspective is there, but in all actuality the artwork is all created the same, so you can move them around, and change them, and it just wokrs. That's the beauty of working with isometric objects.

So let's just say the guy that built a house down there, he decides to create the world's largest bowling ball, so his neighbors don't like it, they think it's an eyesore, but because it's a spherical shape, it's the easiest of all things to create in this illustration because it's just circles. So circles once again, are the easiest things to use in isometric projection. And in this case, the neighborhoods get mad at the bowling ball, so somebody is going around the neighborhood, and he's having the homeowner's association, have people sign the form to get rid of the bowling ball, so, there, how's that for a story.

But this is how I add humans into it, and I'm gonna go over how I create those in an upcoming movie. But the other nice thing about this is the elements that make up the nature in this. So I could move these around to other locations if I wanted to. I could move this down here like this, or I could decide to move this one up here, but maybe I want it larger, like it's an older tree, oops, there we go, it's an older tree, and you can scale it up.

7/17/2015
Isometric illustrations offer a unique view, perfect for technical illustrations, city scenes, and retro-inspired design. What they lack in perspective, they make up for in clarity, and have been used to diagram complex information for centuries. In this course, illustrator Von Glitschka shows how to create detailed isometric views of buildings, vehicles, and even people using Adobe Illustrator. He builds basic isometric shapes, automates parts of the process with actions and Smart Guides, and incorporates color and detail into the final design. The course closes with an artist spotlight and a challenge to get you thinking isometrically.
Topics include:

A: A new video was added that covers reversing isometric projection.

Video: What is isometric illustration?