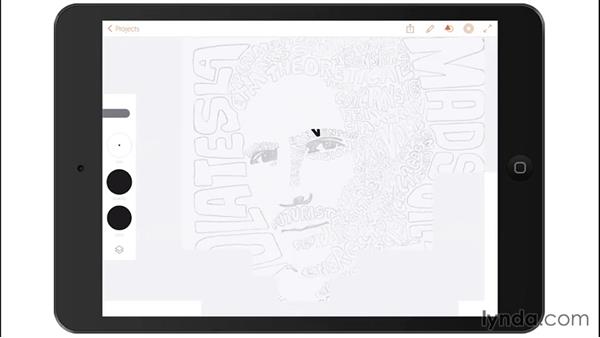 - Whether you draw with a literal pen and paper…or a virtual pen and paper…you exercise the same distinct creative muscle.…In the previous movie, I inked out my design in analogue…using a black pen on paper.…I'm going to now take the exact same design…and digitally ink it out…using and iPad app called Adobe Draw.…Let me show you how I do that.…Before I jump in to Adobe Draw,…I just wanna make a couple comments…on the other apps that you see on my iPad…because these are apps that I use all the time,…and I just wanna comment on 'em.…

I'm not gonna jump into 'em or anything,…but just comment on 'em briefly…so you understand how I use them.…Penultimate I really like for doing thumbnail sketches.…It had the feel of, its drawing ability…feels like you're using…a pencil and pen on a sketchbook…So it works really great…and it can work with your Evernote account, as well,…since they bought that app.…Inkpad is a great app for building vectors…point by anchor point,…and you can use all the principles I teach…in my drawing vector graphics class in that app.…