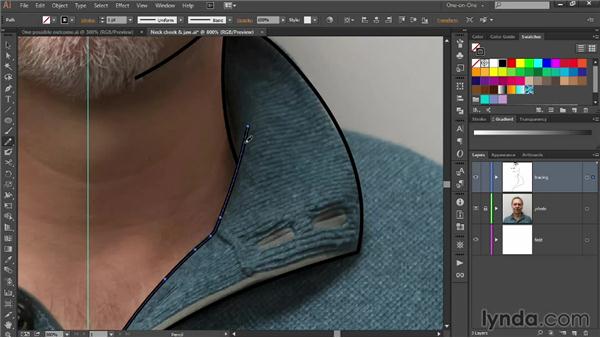 …In this movie, we're going to draw the elements…of this sweater here, and of course you can…work along with any piece of clothing you like,…or any element of your avatar, for that matter.…And we'll be doing so using the new and improved pencil tool in the most recent…version of Illustrator CC, and to say that…it's new and improved is a wild understatement.…It has gone from being a train wreck of…a tool, that I would never recommend to anyone,…to being a very useful free form drawing tool…indeed, especially if you work with the drawing tablet.…

So let me show you what's going on.…The Pencil Tool is located here.…It has a keyboard shortcut of n, which I…suggest you remember if you're working inside Illustrator CC.…I'm going to double click on it, however, to bring up…the Pencil Tool Options dialog box, so I can modify one setting.…So, in my experience, all the default settings are just…fine as is, except for this Fidelity setting right there.…I like to move it one notch over to…the right in order to draw more smooth paths outlines.…